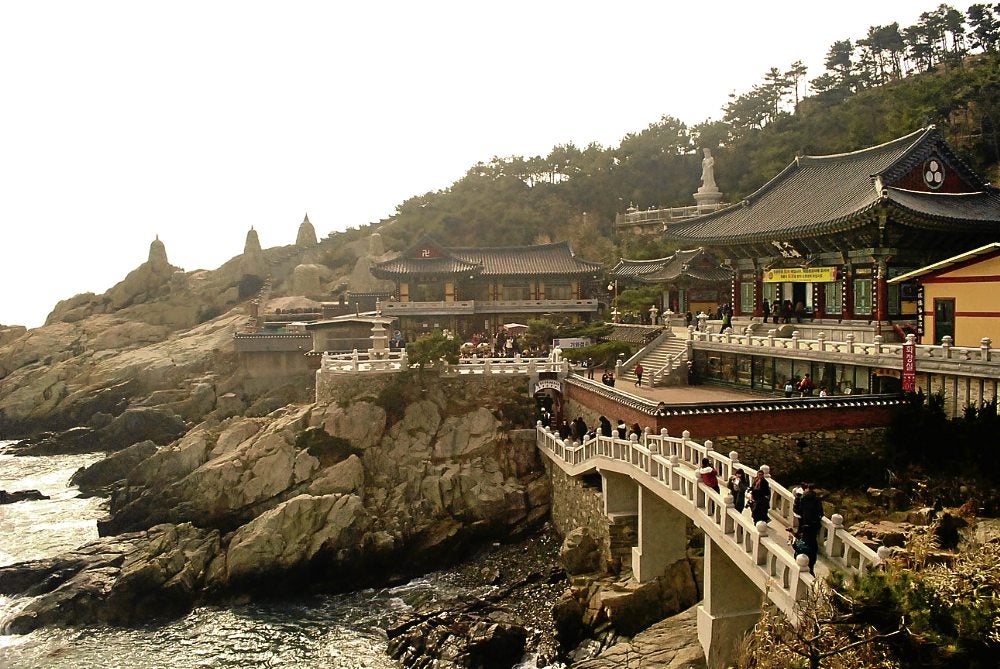 For acrophobiacs like me, standing at more than a hundred feet above the ground takes a lot of guts. But the exhilarating view from the Busan Tower of the city’s well-preserved mountains, amid the hustle and bustle of the metropolis, replaces fear with bliss and amazement.

Although it’s a huge and progressive city with a population of about four million, Busan, remarkably, has been able to preserve its environment and heritage.

South Korea is no longer an alien country to Filipinos, since a lot of us are hooked on K-Pop stars, ramen, and Koreanovelas. Now that Cebu Pacific has added Busan, South Korea’s second largest city, to its list of international flights, the three-hour travel from Manila has become even more affordable.

Inside Busan Tower’s observation platform, which gives locals and tourists a 360-degree view of the city at 120 ft, Busan’s sound urban planning is made apparent. Though  infrastructures crowd Busan’s landscape, the foliage in its mountains is still quite a sight.

This city has much to offer:  vibrant history and culture side by side with modernization, an upbeat coastal economy, and great shopping and dining experiences.

Also in the park is the picture-perfect Flower Clock, the 12-m bronze statue of Adm. Lee Sunsin, a famous naval commander who won various battles against the Japanese navy during the Imjin war of the Joseon Dynasty, and the nearly 4-m high Citizen’s Bell of Busan, which is rung four times a year on New Year’s Day, Independence Movement Day, Liberation Day and Citizens’ Day.

Further south in Yeongdo Island, we stopped at Taejongdae Park. It’s a 10-minute ride on an automatic carriage to reach the park from the base of the mountain. These carriages pick up passengers every 30 minutes.

From the park, it’s an easy descent to view the rocky cliffs of Taejongdae. Halfway through the descent is a viewing deck. At this point, those who don’t want to go further can stop here and enjoy the panorama of the East Sea. But I decided to descend further, and good thing I did. Standing at the edge of the cliff, I was in awe of the breathtaking vista—the wide open sea, a couple of ships passing by, the cold sea breeze in my face.

It was an exhausting hike back up, and I was sweating in my thermal jacket. But the experience was one for the books.

Heading toward the northeastern portion of Busan, we were transported back in time as we visited Haedong Yonggungsa Temple—a unique one in that it’s perched on a cliff next to the coast.

Before reaching the gate of the temple, we were welcomed by its guardians: the 12 life-size stone figures of the Chinese zodiac. Here, a lot of people take the opportunity to snap a shot with their birth animal.

The gate is adorned with four golden lions, representing the four emotions: joy, anger, sadness and happiness. And to reach the temple, we had to go down 108 steps, every step said to represent freedom from the torments plaguing mortals, therefore bringing us closer to enlightenment.

Just a few steps away from the gate is a Buddha statue with a blackened belly. Our guide Grace told us that if we wanted to have a baby boy, all we had to do was rub the Buddha’s belly. Well, by the looks of it, a lot of visitors here seem to want a baby boy.

As we emerged from the last steps of the bamboo-filled trail, Yonggungsa Temple finally revealed itself. Painted in traditional red and blue colors, the pagoda-style temple sat perfectly on the cliff. Too bad we didn’t catch the sunrise, a moment one shouldn’t miss, we were told. That’s why a lot of people come here on New Year’s Day, to watch the sun rise and make a wish for the coming year.

There’s one beach in Busan that, at this time of year, has temperatures ranging between four degrees and seven degrees Celsius. But during summer, the world-famous Haeundae Beach’s mocha-colored shore is packed with people.

Still, despite the cold weather and the even colder sea breeze, a lot of people take a stroll on the shore. Since it’s not a good idea to swim, we just made do with kite-flying. Another fun activity you could do is feed the seagulls along the shore.

The next best thing to visiting temples and picturesque destinations in this port city is shopping.

If you love to bring pasalubong, Gukje Market is the place. It has a wide assortment of cute, inexpensive and quality products. Scour every street and you’ll find something, from souvenir items to herbal products.

It’s better to look around first before buying. Many stores sell the same items at much lower prices, and chocolates, noodles and other food items are best bought in convenience stores and groceries.

For more shopping options, you can always go to Lotte Department Store, which is practically everywhere. But Lotte Gwangbok is particularly famous. Aside from the wide variety of brands, entertainment facilities and high-tech gadgets there, it has a 15-minute indoor musical water fountain show played at exactly 12 noon.

To cap the shopping experience, visit the world’s largest department store, Shinsegae Mall in Centum City, which offers leisure and cultural facilities, a skating rink, and a multiplex theater.

A must-try at Shinsegae is its Spa Land. For only $12 on weekdays and $14 on weekends, shoppers can enjoy for four hours the 22 spas fed by two all-natural spring water, the 13 distinctively themed Jjimjilbangs and saunas, and the open-air foot spa.

I tried dipping in the sodium bicarbonate hot spring, called  “the beauty bathtub” for it removes dead skin cells and makes skin and hair shiny. A word of caution, though: make sure to look at the electronic temperature signages beside each tub before dipping in. Each tub varies in temperature, ranging from 22 degrees to 62 degrees Celsius.

The experience was so relaxing that I didn’t notice the time. Plus, despite the number of people inside, it was relatively quiet; you could hear only the gushing water and some small chatter.

Those who want to improve their blood circulation are advised to try the sodium chloride hot spring. But whatever one’s sauna preference, there’s something to suit his or her taste.

Other favorites here are the Roman sauna, which recreates the ancient Roman bath, and the Finnish sauna.

Mok Jang Won’s “Yangnyum Galbi,” for instance—seasoned beef grilled in front of you. Wrap the beef in Napa cabbage, add the special sauce and it’s a meal you won’t forget.

Couple this with a glass of sikhye, a traditional Korean beverage made from malt powder and rice. The wine is believed to aid in digestion.

If exquisite seafood’s your cup of tea, Dadohae can give you just that. Its seafood pancake, commonly known as pajeon, composed mainly of squid, green onions and egg.

And if you’re the adventurous type, try eating a raw baby octopus. Diced and drenched in vinegar and green onion leaves, this dish requires heavy chomping as the octopus’ suction cups may stick to your palate, cheek or throat.

Likewise, though it has opened branches in Manila, Bulgogi Brothers in Busan is a different experience.

While Bulgogi is certainly in the menu, there’s also Bibimbap, a superb combination of Bulgogi, a variety of vegetables, egg and rice. Partner it with the fresh strawberry shake and it’s definitely a full meal.

After a long day of sightseeing, shopping and gastronomic exploration in Busan, we took a well-deserved rest at Seacloud Hotel. This hotel is a three-minute walk away from Haeundae Beach, with some choice rooms with a view of the beach.