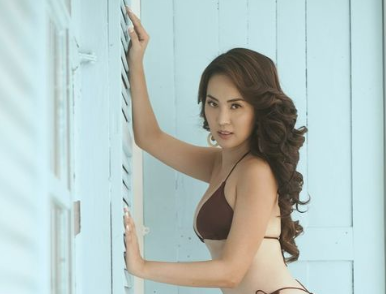 Former beauty queen Janelle Tee trusts the process of rebranding herself, as she transforms into a sexy star by choice.

(I try to understand what I am getting into because at the end of the day, it is not easy. Why should I go sexy? Why should I take my clothes off? I want to not just be a sexy actress but also be a good actress.)

To get a better perspective, Tee revealed she watched the earlier films of Angelina Jolie.

“‘Di ba she started very, very sexy? She did lesbian films. Parang mas naintindihan ko ‘yung larangan (It was like I understood the field better),” she noted. “Maproseso naman ang lahat, eh, hindi ka makarating sa gusto mong makarating kung hindi ka magsisimula.” (There is a process for everything and you will not be able to reach your destination if you do not start somewhere.)

The key, she said, is in giving her all in all of her endeavors. She said she studies what needs to be studied, then gives her whole self to her performance, whether these be in beauty pageants, hosting or acting.

In “Secrets,” Janine (Janelle Tee) and Christian (Benz Sangalang) want to find time to sort out their relationship problems. They escape the city and go to an isolated beach house owned by their friend. They were welcomed by an old couple, Rading and Elena. Unknown to them, there is another guest, Leo, (Felix Roco), Elena’s nephew, who is home for a short vacation from the Middle East where he works as an engineer.

From the outset, Janine does not like Leo because her instincts tell her that there is something dangerous about him. Leo is a satyr, seducing everyone for his pleasure. Without them knowing, they slowly fall into Leo’s trap. JB