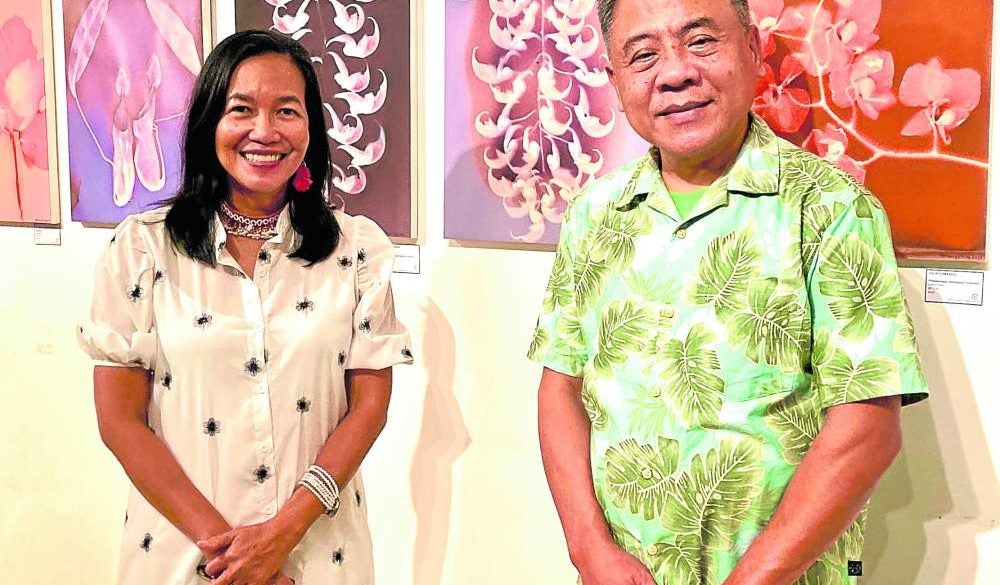 Lumen print artist Julia Sumangil with Dr. Jerry Yapo, director of the University of the Philippines Los Baños Office for Initiatives in Culture and Art

“Blooms,” an art exhibit featuring the lumen prints of endemic and other Philippine flora by retired United States-based nurse and artist Julia Sumangil, recently opened at Sining Makiling Gallery at the University of the Philippines (UP) Los Baños campus.

A lumen print, an art form pioneered in the 1830s by William Henry Talbot, a British scientist and photography pioneer, is essentially a solar photogram or, generically, a picture made using sunlight. Without using a camera, these print images are created by keeping organic objects such as flowers or plants on light sensitive photo paper and exposing their parts to light.

Sumangil earned an agriculture degree from UP Los Baños where she majored in agronomy, and later on served as researcher for institutions such as the Philippine Rice Research Institute and the Philippine Science Heritage Center.

She shifted to nursing and migrated to the United States in the late 1990s, and worked for almost two decades as a registered nurse in the Bay Area.

Her personal journey in lumen printing started about nine years ago when, as an amateur photographer and gardener, she stumbled on some beautiful prints in a Flickr group. She began studying the art form and experimenting with local flowers and plants from her garden or other places she visited.

“I am constantly inspired by the ethereal and fragile beauty of flowers and plants in lumen prints,” Sumangil said when asked why she focused on this form of expression. “They gave me such joy that I was so constantly excited to create and experiment more with flowers that grew in the garden that I and my late husband, Patrick Rose, tended for many years around our home in Oakland.”

Now recently retired from her nursing career, Sumangil spends her time on lumen printing and is also a photographer, a certified diver, a researcher, a cacti grower, an environment advocate and an indefatigable traveler.

Sumangil’s lumen print exhibit at Sining Makiling Gallery at the UP Los Baños campus in Laguna runs until Aug. 5.