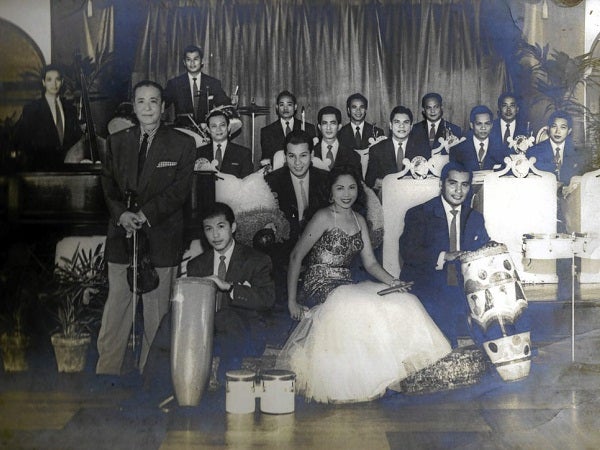 In the ’50S, after class, my classmates and I would walk  the length of Roxas Boulevard from UN Avenue up to the Redemptorist Church in Baclaran, a good 20-km distance.

It was a leisurely and playful walk. On our left were the neon lights of nightclubs, as the dusk settled over the rows of apartments with balconies facing the sea. The cars were fewer then, mostly American-made: Ford, Chevy, Studebaker and Chrysler. The breeze from Manila Bay smelled of salt water, and not of toxic diesel fumes.

A blazing red sky dotted with silver clouds served as canopy for the hundred pairs of lovers sitting on the seawall, from the back of the Luneta Grandstand all the way to Manila Yacht Club, the baywalk beside what is now the Folk Arts Theater, and in front of the Aristocrat restaurant, all the way to Libertad, Pasay.

We kept glancing at many cozy couples sitting on the rocks, sometimes visible in silhouette, other times in the full glare of the lamp post. They all seemed oblivious to the world around them, cooing love words in synch with the whispers of the sea breeze and the splash of the waves against the seawall.  I was 13, those scenes were my first images of people in love. Love meant body intimacy, privacy and small talk in whispers.

The bayside was the trysting place  for any man or woman working in government offices around Agrifina Circle, employees in Escolta and Avenida Rizal, college boys and girls from UST, UE and FEU who wanted to spend love afternoons with the objects of their affection, because there, behind the seawall, Cupid sat on the rocks, waiting for them.

Mobile love had a venue, too— the open top deck of the blue Motorco where the seats came in twos, spaced so close you could put your arms around the girl and feel her hair touching your face. Even mothers with noisy kids in tow were tolerant of lovers on the  Motorco, as it cruised leisurely from one end of Roxas Boulevard to the other.

Luneta has many big trees, manicured lawns, water fountains, and long, wide walks. Under the trees are lovers cooing and wooing just like the ones on the seawall. Sometimes the girl lies on her back, looking at the sky; the boy lies on her tummy, trying to steal kisses.

Many pairs take a stroll, holding hands, laughing over a joke or just smiling silly at each other. Others sit on the park bench patching up their little quarrels, exchanging forgiveness. Surely when they stand up to go, they are lovers again.

In the ’50s, marrying—in the heat of infatuation, or as a long-overdue promise—was affordable. Max’s Restaurant had an offer of P2.50 per head per plate (half fried chicken, butter and buns with salad on the side as a giveaway). A reception with a cozy-sized guest list was only P12,000.

A one-door, two-bedroom apartment on Dian St. near Buendia rented for P80 a month. A kilo of pork was P1.10 and galunggong was 60 centavos. The minimum wage was P180 per month, a jeepney ride was P10 cents. Newlyweds could start a family on P350 monthly income.

Southward near the boundary of Ermita and Pasay were the nightclub rows; the big names in those times were Bayside and Riviera, famous for the great live band music of Tirso Cruz and the prettiest hostesses.

Here, money mattered. The women were beautiful. The men were wad blowers. The men were either fathers or sons of the very rich or members of political dynasties.  Or sons of dirty money.  Or plain  sons of b–ches.

Roxas Boulevard nightclubs had no biases. A boy could take his date, “the girl I want to marry type,” to Bayside to experience a hint of that flirty nightclub going-on. Dancing with your colegiala date alongside other men dancing with hostesses, on the same floor, was perfectly acceptable.

The element of danger was always present. Ugly scenes took place when the spoiled brats of the rich and famous shot each other, guns blazing, at the slightest provocation. Please deposit your firearms at the entrance, said the signs at nightclubs and bars.

Both events hogged the society pages of all the Manila newspapers. The women in these showy affairs were called society girls. They flaunted their best haute couture and the biggest carats of their diamonds. This ostentatious display of wealth was probably the reason Pampanga and Negros became the breeding grounds for the communist New People’s Army (NPA) rebels.

Of course, love bloomed in these glittering affairs, too, usually between a boy from the rich haciendas in Tarlac and a girl from a big fishpond-owning family in Bulacan.  To the hoi polloi, these affairs of the rich and famous were the stuff of fairytales.

Romance by the bay won’t be complete without mentioning Aristocrat, the most popular 24-hour restaurant in the Philippines.

If you had a ball the whole evening, you’d be famished at four in the morning.  You’d then drop by Aristocrat for comfort foods: hot and steaming arroz caldo or goto, puto’t dinuguan and the yummy chicken barbecue dipped in peanut sauce eaten with   achuete-colored sate rice.

At Aristocrat, you’d most likely join the company of famished girls of the night who (pssst!) “sold their bodies” for quickie sex. It was easy to recognize them in their loud clothes and screaming makeup. And just like at the Bayside nightclub, it was perfectly acceptable at the Aristocrat to take a late morning snack with the “girl you want to marry,” alongside prostitutes sitting at the next table.

Manila Bay had its share of tragedies.  Dead bodies were sometimes fished out of the breakwater.  Did they commit suicide because of a broken heart?  Or were they murdered by criminals?

The most poignant story about love belonged to Jorge, my friend who wrote poetry. Jorge was rejected by the girl of his dreams.  To nurse his broken heart, he went to Luneta.  At the seawall, a balut vendor approached him, and in a state of absentmindedness, Jorge bought the whole basket, to the surprise of the vendor.

Then Jorge hurled the balut far into the sea, one after another, each balut representing a tear of loneliness. When he ran out of balut, his sadness was gone. That’s poetry!