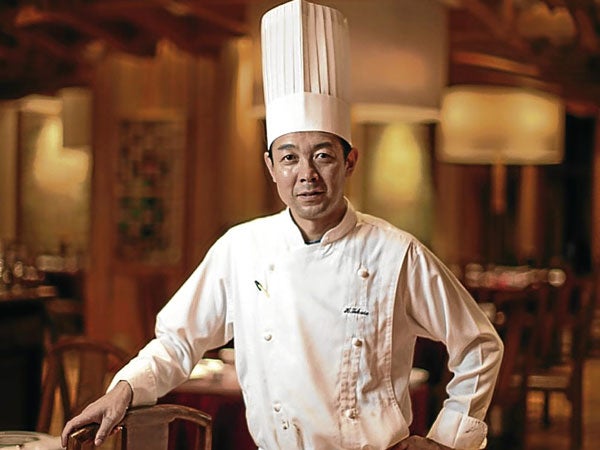 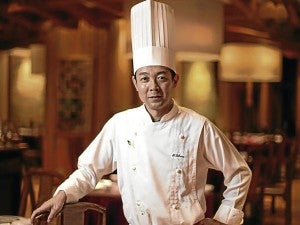 It’s a strange combination—a Japanese chef who cooks Chinese food, particularly Cantonese. But there he was at Tin Hau of the Mandarin Oriental Manila, giving us a first taste of his dishes.

Kenichi Takase is chef de cuisine of Sense at the Mandarin Oriental Tokyo and he is here for only six days (until June 26). Adding to the curiosity about this Japanese chef cooking Chinese is that Sense has been awarded a star for three consecutive years by The Michelin Guide, which rates restaurants and consequently the chefs who own or work there.

Chef Takase believes the Japanese cooking has its roots in Chinese. He has traveled to Hong Kong several times, studying from chefs there who have become friends. He intends to keep coming back, he said, because Cantonese chefs constantly create new and exciting dishes. Yet he is only interested in Cantonese cuisine, which to him is the best in that big country.

But he is Japanese, and so his dinner menu showed the Japanese ingredients he uses. There were mushrooms, seaweeds, Japanese soy sauce and wasabi. How he incorporated all that, including patis (fish sauce), whetted our curiosity as well even before the first dish was served.

Takase is also known to include Thai, Malay and Singaporean ingredients in his cooking. And you can guess that the Japanese way with presentation should figure in this Cantonese fine dining.

But unlike traditional Chinese banquets, the Sense way borrows from the European way of dining, which is course by course, along with suggestions of wines to accompany your dining.

A big platter of appetizer tastings appeared. The slice each of barbecued pork and roasted pork was straightforward. But the steamed chicken (looking very much like the Hainanese version) had sesame sauce. A thin slice of abalone rested on a bed of spinach with small mushrooms looking like fish innards— identified as Japanese nametake mushrooms.

Two servings of vegetables gave different approaches: One was cucumber with avocado and squid; the other, which looked like our pakbet, had the squash tasting like orange.

What looked like an expensive course was the soup, putting together shark’s fin and abalone. It had a steamed egg tofu and, when asked later if he did the tofu, Takase said yes, but think of it as like chawan mushi, the Japanese steamed egg custard dish. It had another mushroom, the bigger nameko.

The next dish was Chinese, indeed, scallops and prawns with broccoli. But on the sides were smeared a sauce of yuzu and pepper, the lemony fragrance of the citrus combined with the spiciness of pepper, yet just giving off a mild hotness.

Steamed fish is always a mainstay of Chinese banquets. Served in individual platters, this was where Chef Takase combined three sauces—black vinegar, soy sauce and patis—those mixing together so well, not one flavor dominated and the overall result was much subtler than expected. 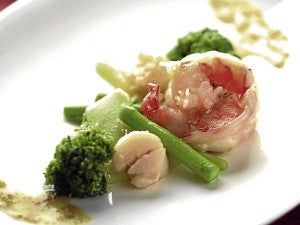 Yes, there was a meat dish and it had slices of tender beef cooked medium to a T with a wasabi soy sauce, but just a touch. The taro was mashed, for that decidedly Chinese touch.

Of course, in Chinese fashion, rice was at the ending, fried with specks of salmon, cod roe, plum and shreds of lettuce and nori.

An ingredient in the dessert of watermelon puree was basil seeds, my first time to encounter those tiny black seeds. It didn’t have that distinct basil taste. The chef said the seeds can make one really full when eaten. We suggested that for dieters, maybe it should be taken at the beginning of the meal.

This contemporary Cantonese cuisine is offered for lunch and dinner at Tin Hau until Sunday. On June 25, chef Takase will be conducting a cooking class. Call 7508888.
E-mail [email protected]