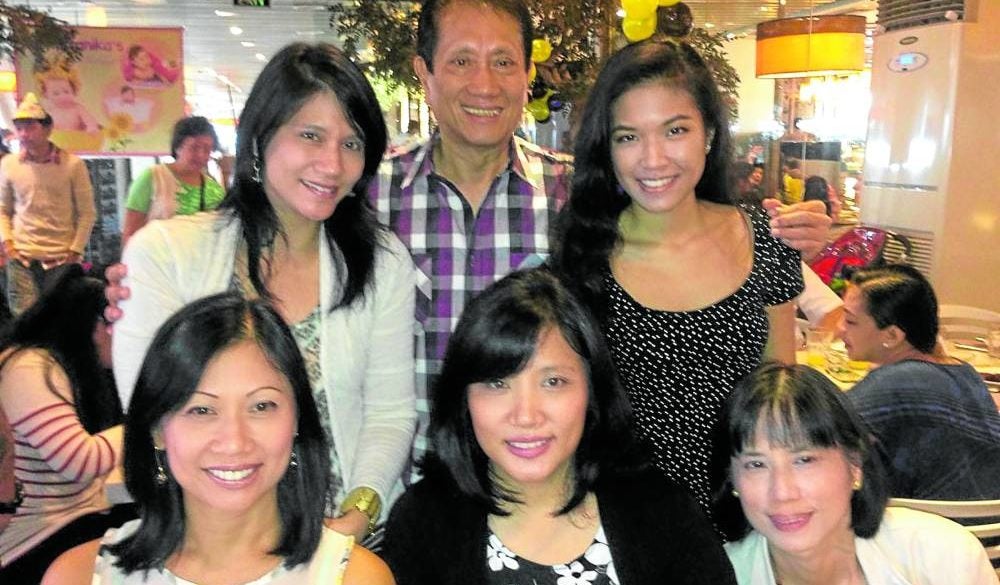 The author in a rare reunion with all his five daughters before the pandemic: (seated) Maysie Houlihan, Minnie Carlos, Minu Yuzon; (standing) Celine Perpiñan, the author and Bianca Henares

Whenever people ask me how many children I have, I say, “Five.” The next inevitable question is, “How many boys and how many girls?” My stock answer: “Three girls and two daughters.” After a short, puzzled pause, this reply always elicits a good laugh. I am among the fortunate few blessed with an all-girl family of at least five daughters.

Like any would-be father in my younger days, I had always wanted to have a mix of sons and daughters, and at least one son. But after two girls in a row, it got to a point that when my late wife was wheeled out of the delivery room after giving birth to our third child, I noticed tears flowing down her cheeks. I asked her why she was crying and she answered, almost apologetically, “It’s another girl.”

I hadn’t realized that she took my wish to have a son that seriously, so I told her, “Don’t be disappointed, it’s good to have tatlong Maria (three Marys) in a row.”

Being assured that I wasn’t that disappointed somehow consoled her, and later I made every effort to show my delight for our daughter, who turned out to be a special joy to us and her grandparents with her perky and bubbly disposition.

Paradoxically, and perhaps unconsciously “making up” for being part of an all-female family, that third daughter, Celine, today has an all-male family—four sons and a grandson! Call it “genetic compensation” or even better, “genetic revenge.”

Fast-forward a few years later, our fourth child came into the world. And you guessed right, it was another girl! As in the past, I made sure that I showed no disappointment and doted on the baby.

But days after coming home from the hospital, she started turning yellow. Rushing her to another hospital, we were told she had “infant hepatitis,” an illness sometimes acquired by newborn babies in the hospital where they were born.

It was touch-and-go, and when her condition deteriorated, our newborn was baptized immediately by the hospital chaplain. My wife’s younger sister, then a medical student at the hospital, stood as the impromptu ninang (godmother).

With everyone in the family praying very fervently, my fourth daughter, Minnie, recovered almost miraculously. Some relatives speculated that Minnie got sick because she somehow instinctively felt she was not welcome as a fourth straight daughter. Nothing could be further from the truth. Besides, growing up, she was her mother’s obvious favorite because we had almost lost her in infancy.

Today, again seemingly making up for the all-female second generation, she is a mother to three boys and one daughter. And as family blessings go, her only daughter, Hannah, is multi-talented and has just completed her sophomore year in college at the top of her class.

Five in a row

Fast-forward another 20-plus years. By this time, I was already pushing 50 and my new partner was already in her mid-30s, so we were happy to welcome any child as long as he/she came out healthy and normal. But as providence would have it, and being consistent with my earlier form, I was once more blessed with a daughter, making it five in a row!

As an “Abraham” (the term used for men who sire children in their more advanced years), I was specially happy to have a kid running around and brightening our home with her childish shrieks and laughter. By this time, Bianca’s older sisters either had their own families or were living separately.

Being close to retirement, I had more time to spend with my youngest daughter than I had with her older siblings. In fact, I made it a point to take her with me on all my business trips abroad in addition to our family vacations, aware that I possibly might no longer be around to see her fully grown up.

So, by the time she was a teenager, she was probably the most traveled young girl among her peers. Today Bianca continues to travel almost incessantly with her husband, Quark, who has just accepted a new job abroad. So, I can look forward to seeing her even less in the near future. It makes me happy that I spent a lot of time with her when she was growing up.

Father’s Day this year is extra special because it is the first time in three years that my five daughters (four with their respective spouses) and I will all get together since Bianca got married in Bali in 2019. For this year’s occasion, my eldest, Maysie, made it a point to come over with her husband, Bob, from the United States where they live, their first opportunity to travel here since the start of the pandemic.

So, despite some unexpected developments requiring immediate attention, we all look forward to getting together simultaneously before Bianca leaves with her husband for his new assignment abroad.

As I look forward to being with all my five daughters again late in life, I can’t help thinking about what I have learned most specially as a father for almost 60 years. I have learned that the love a father gives and sows in the hearts of his children in their growing years comes back to him many times over—in terms of the overflowing love, the unceasing attention and solicitude they give him in return in his golden years. And his most valuable legacy is, by his personal example, fostering their abiding love and caring for one another, with a readiness to help one another even without being asked at any time of need.

I have every reason to celebrate Father’s Day, because my five daughters—Maysie, Minu, Celine, Minnie and Bianca—have proven to be the real treasures in this aging father’s life. And in addition to their loving husbands, they have accumulated more treasures of their own for me to also enjoy—my 11 grandchildren and three great-grandchildren, with more expected to come.

Happy Father’s Day to all the men out there who have had the joy and satisfaction of being called Dad, Papa, Tatay, Itay, Ama—and whatever the affectionate and intimate terms are for “Father” in every other language on earth.