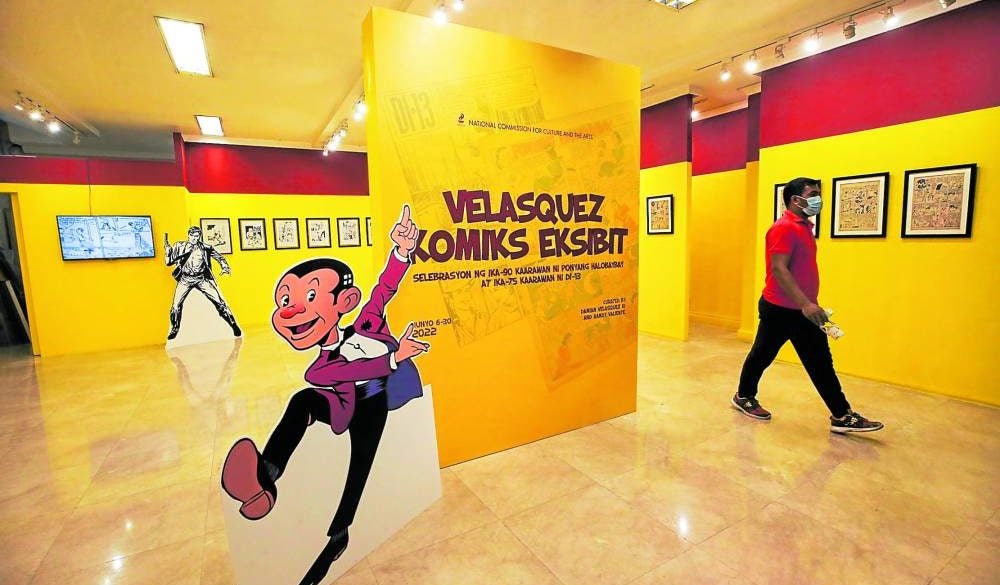 If Instagram existed in 1932, Ponyang Halobaybay would probably be dominating everyone’s feeds, very much like the Anne Curtises and Nadine Lustres of today.

Ian is the grandson of komiks pioneer and DI-13 creator Damy Velasquez and grandnephew of Tony Velasquez, maker of Kenkoy—and subsequently, Ponyang.

Regarded as the Father of Philippine Komiks, Mang Tony—as the older Velasquez was fondly called—created Francisco “Kenkoy” Harabas in the 1920s, first appearing on the pages of Liwayway Magazine in January 1929. Sporting a slicked-back hairstyle and often looking dapper in well-tailored suits, button-down shirts and baggy pants with suspenders, Kenkoy was a picture of how early 20th-century Filipinos embraced—though at times awkwardly struggled with—American culture.

Leading quite a colorful cast of characters in “Mga Kabalbalan ni Kenkoy,” Mang Tony’s Kenkoy became a household name, appearing even in advertisements and commercials. He inspired movies in the ’50s and ’70s.

Finally, Kenkoy became immortalized as his name came to be part of the Filipinos’ vocabulary. It came to describe someone funny. “Ang kenkoy mo talaga!” our grandparents would exclaim whenever we did or said something that cracked them up.

Following the success of Kenkoy, Mang Tony realized that there should also be a female-led komiks that would interest readers. He introduced the fetching and polished Ponyang Halobaybay on the pages of Liwayway Magazine in 1932. “Halobaybay” (or “halubaybay”) is a type of fish, typically dried, and sold in wet markets.

“One could describe Ponyang Halobaybay as a sophisticated character,” said Ian. “It’s remarkable that she existed during that time, considering that she’s a female character and a strong one at that.”

Much like Kenkoy, Ponyang was a reflection of how Filipinos were greatly influenced by the Americans during the time, adopting not only a Western style of dressing but attitude and way of thinking as well.

But while funny guy Kenkoy’s misadventures followed how he espoused the ways of the West, smart and statuesque Ponyang’s stories often showed how she would outsmart her set of eager—and sometimes bothersome—suitors.

“Her suitors would think that they’re the ones one-upping Ponyang but in the end, it’s the other way around,” said Ian with a laugh. “Of course, sometimes it’s Ponyang who becomes the butt of jokes. But most of the time, she’s the one who outwits the others.”

“They shared the same characters,” said Ian. “Sometimes, Ponyang’s supporting characters would find their way in Kenkoy’s komiks. Other times, too, Ponyang would cross over with Kenkoy.” If Marvel has its Marvel Cinematic Universe, there’s a Velasquez-verse, too.

From Liwayway, Ponyang appeared next in Paruparo, another popular magazine of the ’40s and early ’50s. She was last published in Aliwan Komiks.

“She didn’t become as popular as the others because there’s no Ponyang movie, unlike Darna, Lastikman, all Ravelo characters who had their own movies. It was only Kenkoy and DI-13 who had their own films,” explained Ian.

Although Ponyang came to be a lesser-known komiks character than Kenkoy, she served not only as a role model for female readers with her gutsy and take-charge personality, she was also an inspiration for creativity.

Mang Tony encouraged readers to design Ponyang’s outfits and send in their sketches. The chosen ones were then featured in the following week’s strips alongside the name of the contributor. Readers can even cut these out, paper doll-style, so Ponyang could have different OOTDs.

Regretfully, the Velasquez family was only able to keep a few originals of Ponyang’s komiks. Explained exhibit cocurator, award-winning writer and artist Randy Valiente, “It’s actually a common problem regarding originals. Most of the original artworks of our komiks are with foreign collectors in Europe, in the United States.”

He added that Philippine komiks’ invaluable artworks are not in the hands of Filipinos, who previously had very little interest in original komiks artworks.

“It’s a good thing that Ian is passionate about the works of his grandfathers,” Valiente said.

The ones in the exhibit are from Ian’s grandfather’s, Mang Damy’s, collection. Both editors and komiks creators, the brothers had a very close relationship, said Ian. When Mang Tony established local komiks company Graphic Arts Service Inc., or Gasi, in 1962, Mang Damy came aboard as his older brother’s assistant manager.

Celebrating alongside Ponyang is DI-13, Mang Damy’s popular detective serial published in Pilipino Komiks by Ace Publications. Mang Damy veered away from the supernatural and adventure stories that were favorite themes during his time and was inspired instead by the tough and intelligent police detective Dick Tracy. The result was DI-13, who turns 75 this year.

Running until June 30, the art and pop culture exhibit at NCCA Gallery features original Ponyang and DI-13 komiks pages, reproductions, pictures as well as vintage komiks memorabilia. Of course, included in the mix are some Kenkoy original artwork as well.

For his part, Ian feels extreme gratitude for the NCCA for giving them the royal treatment. “I’m so happy with this exhibit. It’s more than what I expected the NCCA would provide,” he said.