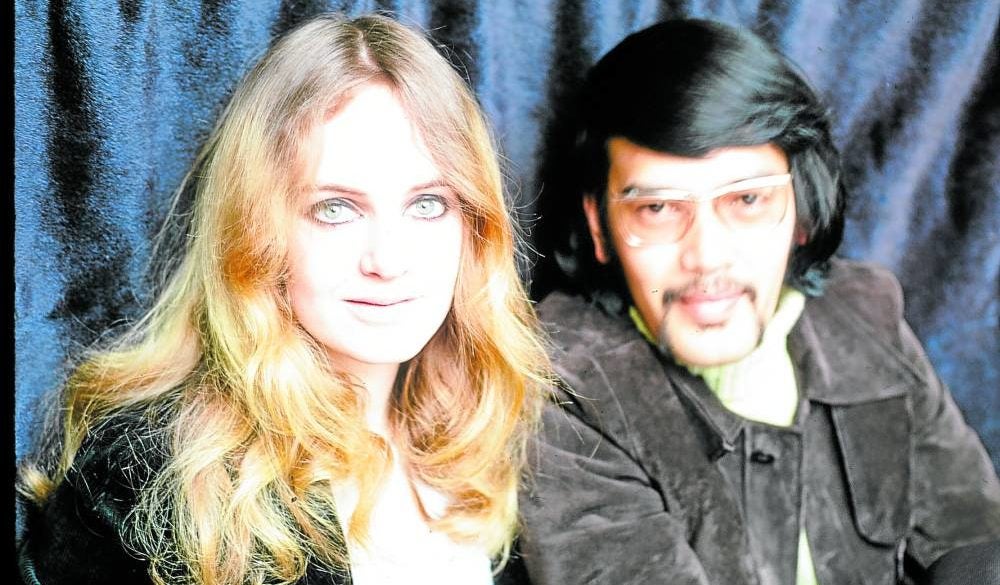 Sitting and holding a cane between his splayed legs, a stoic beggar with his shoulders stooped is the subject of National Artist Benedicto “BenCab” Cabrera’s painting from 1969. This is known to be the start of his most prolific period. The untitled artwork from the “Scavenger” series, will go on the block at Salcedo Auctions on June 25.

The painting is significant not just because of the rigid posture of the subject—a contrast to his later works that are characterized by fluid lines despite such a miserable subject matter. The provenance makes this artwork intriguing as it was once acquired by an Academy-award winning British actress and dame (whose name is withheld).

British writer and theater producer Caroline Kennedy, BenCab’s ex-wife, recalled that she and BenCab had traveled to Thailand, Nepal, India, Italy, Switzerland and France before getting married and settling down in London in 1969.

“For an artist to be confronted by original paintings and sculptures, rather than simply seeing them reproduced in the pages of art books and magazines, was a very unique and overwhelming experience for Ben. At the same time, he was, understandably, homesick. So, we started collecting early Philippine maps, books and prints. Once settled in London, he reflected his homesickness by pursuing variations of his ‘Sabel’ series. He started to expand his work by including the evocative Filipino subjects he found in these books and prints into his ‘Scavenger’ and ‘Larawan’ series,” she wrote in an email.

Through their neighbors who were actors, the couple met this prominent British actress and her husband, both of whom then owned a gallery. The actress was impressed with BenCab’s works that she invited him to put up his first-ever solo exhibit. She bought a lot from the artist including that untitled work.

Many of the actress’ friends came to the opening night, such as American movie producer Larry Kramer, British playwright Harold Pinter and British director John Schlesinger who likewise purchased the artist’s works. BenCab’s debut exhibit was a sellout. The actress said in jest that she set up the gallery to compensate for the taxes on her movie income.

BenCab’s early years in Tondo exposed him to the poor and the desolate, which later became a common theme in his paintings. Local art critics comment that his works in the ’70s and ’80s were his freshest, most compelling and experimental period.

BenCab’s immersion in the world’s best galleries, London’s buzzing culture scene, the creative movements and the people’s individuality fired up his imagination.

When they bought a printing press for graphics, he experimented in different techniques, such as intaglio, sugar lift and engraving. As a photographer, BenCab used his photos as subjects for his prints. The couple set up a stall in the Saturday market on Portobello Road, where he sat and created his first series of etchings of subjects from that scene.

“When Ben returned to the Philippines in 1985, he had accumulated a vast knowledge of European art and became proficient in many techniques and processes that he had not been exposed to or experienced during his developing period in Manila. Now he had the opportunity to use all that acquired knowledge in his future work. He returned to his old, familiar subjects, his scavenger ‘Sabel’ series and his historical ‘Larawan’ series. He distinguished them from his early works by adding canvas size and vibrant colors,” said Kennedy.

She had kept some of BenCab’s works, hoping that they would be passed on to their children. However, keeping the paintings was challenging for her roving lifestyle from the ’80s to 2000s, working with refugees with disabilities in Bosnia, Croatia and Azerbaijan.

In Costa Rica, she headed an English-language theater and acted and directed in several productions. Kennedy published Costa Rica’s first Green Guide, “Paginas Verdes de Costa Rica,” on sustainable lifestyle and the list of “green” companies and services in the country.

“Packing up the paintings to take with me every time became too much of a risk. And, working for a charity, my income was not sufficient. I needed extra money so I could help my children pay their rents or mortgages. I sold a few pieces at auction at Christie’s in Hong Kong,” she said.

BenCab and Kennedy’s daughter Jasmine, who was living in Manila, introduced her to gallery owner Evita Sarenas. The latter suggested that her remaining BenCab paintings be sold through Richie Lerma, chair and chief specialist at Salcedo Auctions. However, this untitled scavenger painting up for auction was unloaded from a private collection in London.

Another daughter, Mayumi, petitioned Kennedy to become an American citizen. She now lives in Los Angeles with the two daughters and three grandchildren.