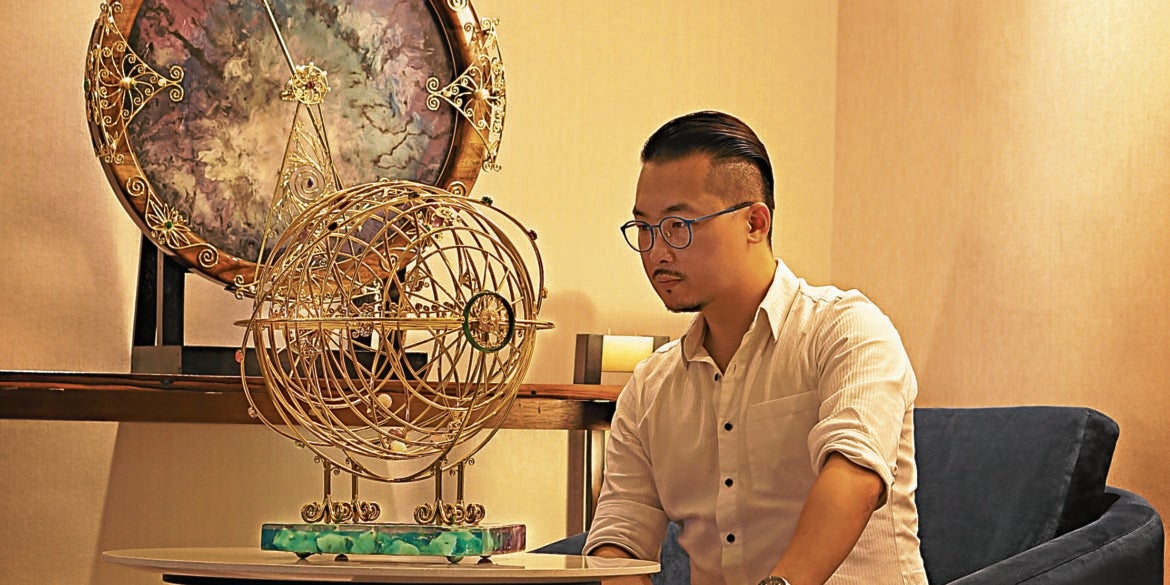 Glittering on the table is an exquisitely wrought sculpture, shaped like a telescope. Instead of an optical tube set on a mount, the art is a uniquely forged metal cylinder that seesaws on a sculpted mount. Large balls of obsidian, smoothened dark volcanic rocks known to banish negativity, are set on both ends.

The artist prefers to call it a “scepter” because it denotes royalty and authority. The piece is encrusted with carnelians for sparkle and joy, onyx for protection, agate for harmony and opal for hope.

“I took the form of the telescope as a symbol of stargazing and dreaming big,” he says.

Third-generation jeweler Ivan Co would rather use gemstones and precious metals for kinetic sculptures than for earrings and bangles. He left behind the fine jewelry business to produce his rare medium born out of his powerful imagination.

He calls himself a “paracosmic artist,” someone who creates a fantasy world and creates art as a breather from the pressures of life. When the viewer immerses himself in Co’s bejeweled kinetic art, he falls into a soothing state by watching the swing of the ornate pendulums.

Then again, the pieces enable the individual to reminisce on the past or envision the future as one gazes at the gentle spinning of the globes, adorned with metals wound into coils, spirals and botanical motifs. Co says his works have been a retreat from the past storms of his life.

Co’s grandfather owned a pearl farm in Mindanao and sold South Sea pearls. When Co was a student, he worked at the production area of his father’s jewelry company, Hoseki. Co interpreted the drawings of the jewelry to the plateros, explaining to them the technical aspects of making the client’s accessory.

In 2006, his design of a sterling silver bangle with 18-karat gold rivets, kamagong inlay and South Sea pearls won in an international competition organized by the South Sea Pearl Consortium. The androgynous design meant to encourage men to wear jewelry. He wanted to promote Filipino materials and craftsmanship to the world.

The prize was a scholarship at the Gemological Institute of America in Hong Kong. When Co went on his own, he wanted to create avant-garde jewelry designs such as breastplates and statement accessories. But the market was too conservative, preferring the conventional styles for accessorizing.

A few years ago, Co dreamed of unusual art inspired by the ancient worlds which led him to make bejeweled kinetic sculptures.

“Jewelry is meant to be worn. There is no term for my works. I don’t want to call it mixed-media art because the process is the same as making jewelry—from metallurgy, picking the gems, to polishing and setting them. The difference is that I apply physics,” Co says.

His latest series, “Fenestra,” is the Latin word for “window.” Through the hypnotic and repetitive movements of the pieces and the energies of the gemstones, the viewer is mesmerized. Like the window, his works aim to open up the viewers to a different world or a new perspective.

Co recalls that when he first created his kinetic art with the materials and techniques for jewelry, he felt a sense of calm and purpose. That “Aha!” moment served as a window for him to take his craft to a mystical level.

The design inspiration for the “Fenestra” series was inspired by “Critias by Plato,” one of the Greek philosopher’s dialogues. Critias was an oligarch and patriarch who told the story of the advanced civilization called Atlantis. Based on Plato’s imagery, Co developed his version of the aurichalcum, an extinct metal said to be found in Atlantis.

From research, Co forged copper alloy with zinc, silver and gold. The aurichalcum serves as the elaborate framework for his revolving globes and pendulum sculptures.

The works are titled in Latin to evoke the distant past.

“Lumina” is a globe of planets revolving on their axis, accompanied by meteors and stars, rendered in jade, moonstone, amethyst, carnelian, tiger’s eye, turquoise, agate, pearls and rhodochrosite, a stone that energizes the soul.

“Lumina” is lit underneath so that its sculpted frame forms patterns on the ceiling.

“It’s my version of the northern lights,” says Co, referring to its symbolism of souls in the World of Light.

Co has since left behind the jewelry business that satisfied the mundane desires and vanity. Now he has found his niche in creating works that uplift the spirit.

Co says, “I’ve been creating art that nobody else has seen.” —CONTRIBUTED