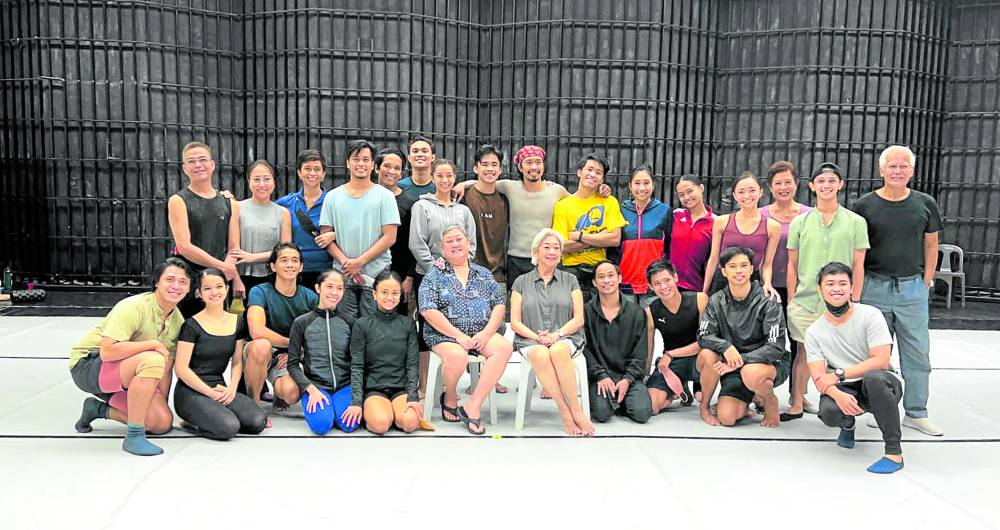 Alice Reyes forms own dance company: ‘We are supporting a talented generation’

Unfazed by unsettling times, National Artist Alice Reyes has formed a new company. Alice Reyes Dance Philippines (ARDP) was registered with the Securities and Exchange Commission last month, just ahead of announcements for its debut season at the Cultural Center of the Philippines (CCP).

ARDP is a CCP program, not a resident company, Reyes clarifies. It falls under the CCP Art Education program, running classes for teachers and dance students nationwide. Meanwhile, their training, performances and new works fall under the CCP Professional Artists Support Program (PASP), which likewise invites pandemic-displaced dancers from other groups. They receive grants which pay for their living expenses.

“It’s a give-and-take arrangement,” says Reyes. “CCP supports the program, such as the venue and rehearsal space for its shows. We provide artistic content at their beck and call. Should a production number be urgently needed for CCP Parangal for the new National Artists or Cinemalaya in July, we can do that. We are supporting a talented generation.”

In 1969, Reyes blazed the trail by introducing a contemporary genre with Alice Reyes Modern Dance Company which, through several iterations, has evolved into Ballet Philippines (BP). Reyes retired in the late ’80s and was invited by BP in 2017 to become artistic director to oversee its continuity until the company’s 50th anniversary season in 2019.

After ending her term in March 2020, the pandemic forced the economy to shut down, leaving people, including dancers, jobless or furloughed. A group of BP dancers, who were technically on floating status, sought Reyes’ help. The dancers then appealed to the CCP management for support.

As pandemic restrictions eased, CCPDW got more invitations to perform outside. However, the CCP cautioned Reyes that they could not be identified as the CCP Dance Workshop.

“We were asked to acquire our own legal entity. We couldn’t go out and carry the name of CCP unless it was processed through the board. It was acceptable to be known as CCPDW under the PASP only when we performed inside the Cultural Center,” explains Reyes.

ARDP is the result of a long kinship with Reyes’ dancers and choreographers and friends who have agreed to serve as the new board.

Leading the 17-member company, Ronelson Yadao, 32, ARDP’s artistic director, joined BP at age 16. His international experience includes being a member of the prestigious Cloud Gate Dance Theater in Taiwan and guesting at Company Erasga, an Asian-Canadian ensemble in Vancouver. Reyes saw his natural leadership and charisma with the dancers, such that she appointed him and Adam Sage as associate artistic directors in her last tenure with BP.

ARDP launches its season with “Alay ni Alice at Agnes,” a tribute to the two National Artists for Dance, Reyes and Agnes Locsin, from Sept. 27 to Oct. 2. Celebrating Filipino masterpieces, the program will present Locsin’s “Igorot,” a fusion of ethnic and neoclassical ballet based on the rituals of the Mountain Province; “Moriones,” a male mask dance based on a religious festival; and “Elias and Salome,” based on the characters of “Noli Me Tangere.”

Reyes will present “The Company,” a fun piece about dancers preparing for a performance, and “Carmina Burana,” set to the Carl Orff opera music.

“Premieres and Encores” will celebrate the 75th anniversary of friendship between France and the Philippines from Oct. 25 to Oct. 31. It will feature two popular pieces and a new work by French choreographer and longtime BP collaborator Rheda Benteifour.

This program will also show the compelling works of young choreographers. Lester Reguindin’s “Now” is based on activist Greta Thunberg’s speech at the United Nations. “Visayan Kundiman Suite” is a set of expressive dances by Erl Sorilla, John Ababon and AL Abraham. JM Cabling’s “I Wanna Say Something” is a piece about the chatter in someone’s mind.

The season caps with the Christmas show “Puso ng Pasko” from Nov. 29 to Dec. 4. Yadao expands the dance film “Ituloy ang Pasko,” about an old overseas Filipino worker who, during the pandemic, reminisces on his love story and Christmas in the Philippines, through the music of National Artist Ryan Cayabyab.

ARDP describes its management style as both democratic and mentoring emerging choreographers, teachers and creatives.

“It’s not just me,” maintains Reyes. The company culture allows the members to have a strong voice.

Yadao adds that ARDP is leveraging its nationwide visibility, established by the CCP’s online classes and workshops. “We want to go outside of the intimidating walls of CCP and extend our reach in the regions.” —CONTRIBUTED