Where to go when you only have a few hours in Seoul | Lifestyle.INQ ❮ ❯ 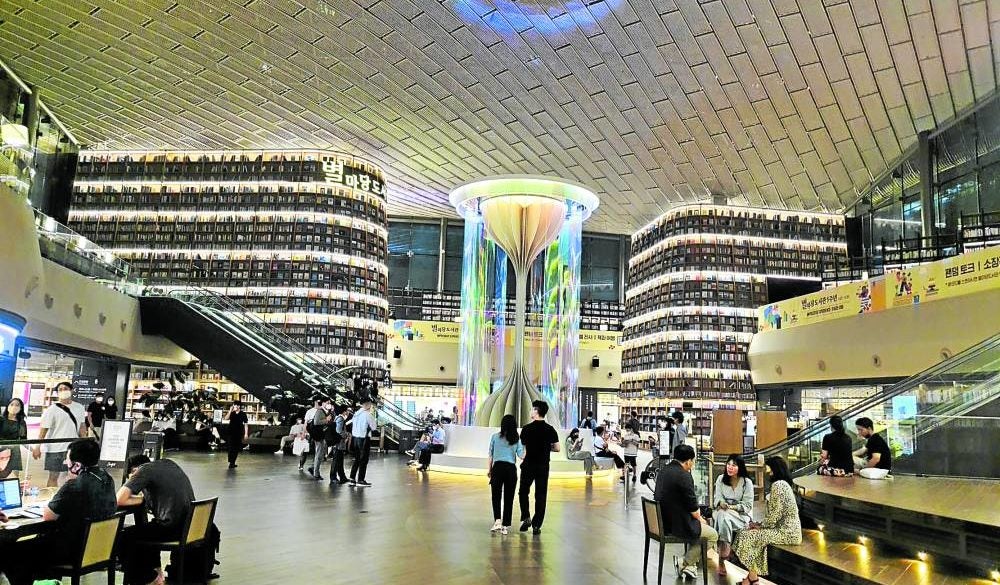 The Starfield Library is expansive and beautiful. —Photos by Ruth L. Navarra

The best time to go to Myeongdong is right now. A lot of people have been turned off by the closed shops they see on social media. But the area is actually still filled with the excited vibe of returning tourists, students and K-pop fans.

Myeongdong has a good mix of expensive and cheap accommodations. It is a desired area to stay in because of its proximity to tourist attractions. It’s two stations away from Dongdaemun Design Plaza (DDP) and Seoul Station, which is a jump-off point for those who want to go to the provinces. The Namsan Tower is just a 10-minute drive away and so is the Gyeongbokgung Palace and Bukchon Hanok.

The closed shops are real. Many are not open even during weekends. While it’s heartbreaking to see wilted plants in front of one of Nature Republic’s shops, they still have branches that are open. There are other beauty stores open, as well. You won’t run out of places to buy face masks and other K-beauty products in Myeongdong.

Convenience stores and marts that sell Korean goodies, treats and KF-94 masks for P1 are still aplenty, although stocks are no longer as impressive. But the good news is, the quality of street food that you can buy in Myeongdong has improved.

SMTown Coex Artium did not survive the pandemic. Rather, SM Entertainment opted to transfer to a building complex within the Acro Seoul Forest near Gangnam. However, they have an SMTown shop at the DDP where you can still buy official merch of different K-pop groups such as Super Junior, Red Velvet, EXO, SHINee and NCT.

DDP remains one of the places first-timers should visit because it is a favorite filming location for K-dramas, including “Vincenzo,” “Love Alarm,” “My First First Love” and “Fated to Love you.” The fashion show in “Record of Youth” was also filmed here, and for good reason. A lot of magazine spreads and fashion shows were shot or held in the complex.

The Exhibit Hall now features “The World of Tim Burton.” You can view the works of the artist and filmmaker in the exhibit, including the ones where he drew on tissue paper. Photos are not allowed inside the hall however, there are installations outside where you can take selfies. Ticket entrance costs P850. You will need to set aside at least an hour to enjoy the exhibit, which runs until Sept. 12.

Even without SMTown, the Coex complex is still a must-stop for K-drama and K-pop fans. You can find the giant hands of Psy in the “Gangnam Style” pose just outside. It makes for a good backdrop for the ‘Gram.

The Starfield Library inside has not been used as a K-drama location because it is a high-traffic area. However, it is a beautiful library and installation where you can create your own K-drama moment for your social media. We have to warn you, though, that some books are actually wallpaper. And you’d most likely find sleeping and resting visitors on the second floor.

The Coex Aquarium near the Starfield Library is also nearby. The Aquarium is small but it is one of the most common locations to shoot for K-dramas.

What’s a K-drama without a cafe? The Mapo District remains one of the favorite filming locations of series and shows because of the number of beautiful cafes found in the area. For tourists, the Mapo District is known as the Hongdae area. However, the student area of Hongdae is just a small part of Mapo.

The ongoing Netflix series “Cafe Minamdang” can be found in this district. It is located at Mapo-gu Dongmak-ro 15 gil 25. In the show, its exterior is used as the spot where Seo In-guk and sister Kang Mi-na live and run their business. In real life, it is a Bebeco franchise.

Owner Jeon Byeong-hoon told Lifestyle that they will not change the exterior of the cafe for as long as fans come to get their photos taken. Bebeco serves some of the best sandwiches and donuts in Seoul.