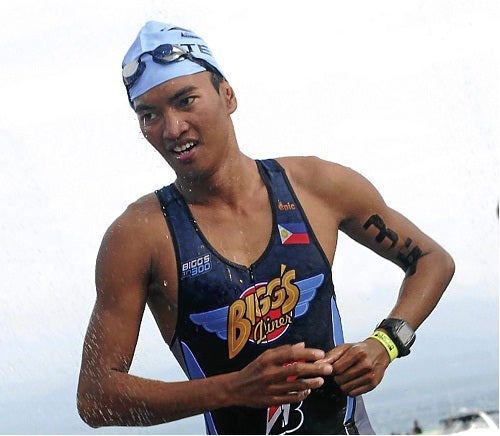 The unpredictable high of trail running

Waking up as early as 4 a.m. may be a hard task for most of us, but not for the more than 400 runners who showed up for the second leg of the Vaseline Men Xterra Off-Road Triathlon Series in Liloan, Cebu.

Kicking off the adrenaline-packed weekend was a trail run across the picturesque landscape of Liloan. Nature seemed to favor the  runners, as it was a perfect day—overcast sky and temperate weather.

As compared to running on flat surfaces, one great thing about trail running is its unpredictability. You have to watch your track for occasional potholes, stones and rocks, and conquer nature as you traverse hillsides with knee-high bushes and slippery rocks. Apart from endurance and strength, mental awareness is essential in winning.

This year’s number of trail runners is a “remarkable one, given that, as opposed to flat-surface running, trail running causes more hassle because you have to travel further just to get to the venue, and it is more challenging, given the course,” said Vaseline Men brand manager Jonathan Pua.

Despite the rigors of the course, Kenyan Abraham Misos finished the 21K category for men at 1:14:49. And clocking in at 1:52:24, Andrea Bess topped the 21K women’s category.

The next day, as the sun rose in the Camotes Sea, triathletes from all over the world prepared  to tackle the challenging course that makes Xterra famous worldwide as one of the most extreme racing competitions.

At gunstart, more than 150 professional and budding triathletes, together with celebrity athletes, raced for the chance to qualify in the Xterra World Championship to be held in Maui, Hawaii, in October. Forty slots awaited top finishers in 13 age groups for males and females.

Triathletes swam through two loops of the 1.5-km course of the chilly Camotes Sea. Possibly one of the highlights of this leg of the race was seeing professional triathletes Renata Bucher of Switzerland and Austrian Carina Wasle’s neck-to-neck clock-in to transition.

Celebrity triathletes Richard Gutierrez, Drew Arellano and Paolo Abrera clocked in two minutes past each other. Not far behind was Sen. Pia Cayetano.

The 30-km bike run proved to be the most grueling leg of the race. Triathletes were earlier advised that the most challenging technical part was the treacherous stretch of dirt, gravel, dried-up bushes and jagged rocks leading to the Liloan Lighthouse called the “Graveyard.”

TRR team member Rovilson Fernandez attested to this. “I haven’t biked in a long time, and this one was very challenging and technical that my chain fell off 46 times. It pays that you know when to change gears on this type of terrain.”

Well ahead of others, professional triathlete Ben Allen of Australia led the last leg of the race—the 10-km trail run.

“Running past the villages with the townsfolk cheering and children waving, it’s just amazing. It clears all the exhaustion away,” Slack said.

After an exhausting and grueling two hours and 30 minutes of swimming, biking and running, Allen led the pack and sealed his victory in the men’s category. He was closely followed by Olivier Marceau of France (2:32:22) and United Kingdom’s Cedric Lassonde (2:32:38).

“I really enjoyed racing here. I’ll come back next year and defend my title,” said Allen.

“It was a really hard course, we’re lucky that the weather’s good. I must admit, the biking part of the race was the hardest. It’s very technical,” Bucher said.

Although triathlon is a budding sport in the country, Filipino triathletes showed that they, too, can put up a fight.

The excitement and thrill continue with the final leg of the Vaseline Men Xterra Off-Road Triathlon Series on Nov. 18 in Clark, Pampanga.