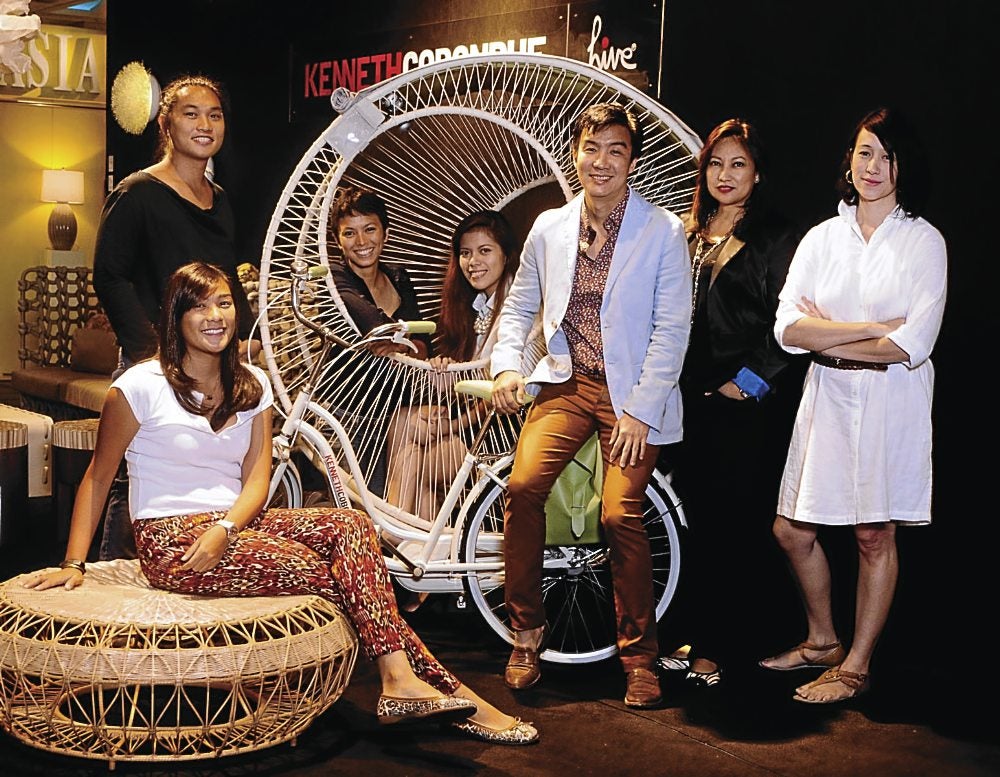 This year’s Manila Fame buzzed with a vibrance that has been missed over the past few years. On the first floor were row upon row of furniture booths featuring all styles, ranging from rococo to tense linear moderne.

Tucked amid all that was a little booth rumored to be owned by one Al Valenciano. It has an eye-popping array of handwoven Abel Iloko textiles, a hopeful assurance that somewhere out there, handcraftsmanship is alive and well.

At the entrance of the second floor was another statement of artisanal preservation—booths of weavers and beaders showcasing  crafts in danger of extinction, if not properly supported.

In the main hall was a merry mix of various products, from Christmas décor to fine jewelry, textiles and accessories for the home.

At the center was the sprawling display of Hive and Kenneth Cobonpue, the furniture designer of the moment, with pieces coveted by fine modern homes.

Among the highlights of this year’s exhibition was the introduction of Hive’s young Filipino designers, adding a new energy to the brilliant cluster of talents led by Cobonpue,  Luisa Robinson (Hive’s own design manager), Christy Manguerra, Kai Igot, Joseph Laxina, and foreign designers Danny Fang of the Netherlands, Korea’s Hae Young Yoon, and Brad Stebbing from Australia.

In line with Hive’s goal of producing lighting and interior accessories that are innovative and with a high sense of technical discipline and craftsmanship, each young designer exhibited an individual and distinct knowledge of his or her material, coming up with forms that fit right in with Hive’s vision.

Hive’s booth was a hub of activity from day one, with most, if not all, of the exhibiting designers  present in all days. Central were Cobonpue’s own new furniture lines, under his own brand.

“Rapunzel,” a totally upholstered set with a base of braiding like the fairytale princess’ tresses, consisted of a lemon-yellow sofa and armchairs in that deep maroon shade of mangosteen, its seats and backs abundantly stuffed.

Another sala set in dove gray seemed to have gotten its decorative inspiration from the crocheted chain stitch. Coffee and side table coordinates had bent rounded edges and giant running stitches in a darker shade for accent.

The come-on object of curiosity was Cobonpue’s version of a bicycle built for two, an old-style two-wheel bike in mint green with a coated bamboo sidecar whose proportions were more akin to a comfortably wide butterfly armchair. Hardly a pedestrian mode of transportation, the vehicle unabashedly smacked of pleasurable resort idleness.

Draped on one side of the booth was Robinson’s sensuous black leather vine, “Secret Garden,” made up of 20 modules of woven leather retazos twisted and shaped into roses, leaves and tendrils, one module carelessly strewn as a centerpiece over a dining table.

Robinson’s new design, “Sway,” was a miniature modification of her previous “Dragon Tail” lamp. Likewise made of tyvech, constructed in her signature origami style, the dainty lit forms were stuck on wires weighed down by smooth river stones. One could imagine the origami forms swaying in the wind, like lyrical giant firefly or Lilliputian dragon tails.

“Poppy” is a ceiling lamp shaped like a topiary ball made up of  paper poppy flowers in sepia, a delicate cluster of dried flowers, either pressed between the pages of a romantic novel—or ready for the drug factory. The poppy is not only a flower; it is a creation of Christy Manguerra.

Dutch designer Danny Fang had ceiling lamps of various sizes hanging at different heights. “Checkmate” is of white papier maché, reinforced with kraft paper interior, gilded in 22-karat gold leaf. Contrast of material, which seems to be a signature Hive treatment, is evident in this piece that marries roughness and glitz.

The new young designers’ pieces were varied, yet somehow had a unified sensibility, whether it was in the astuteness of  design, or in that certain undefined standard that has been slowly developed and rendered by Hive’s mentoring design team.

Jinggoy Buensuceso, a visual artist and sculptor by education, chose metal as his medium for “Boulders,” his set of oxidized metal planters. Rough and rustic but geometrically modern, the yellow-gold  oxidation makes for a dramatic contrast against the greens.

Mona Alcudia’s “Menagerie” is her take on planters. Made of stonecast, the egg-shaped wall accessories had curious antlers shooting out above the demi-egg shapes, forming representations of horned animals: reindeer, ram, moose and elk.

Necessarily used for lush, creeping vines like ivy, where the vines eventually grow and wrap themselves around the metal antler forms, they evolve into miniature topiaries. With the soft foliage against the stonecast “faces,” the totality is a playfully vegetated, sculpted Georgia O’Keefe wannabe.

Ultramodern and young is Olivia D’Aboville’s wall sconces of plastic stirrers. Massed together and lit from behind with LEDs, “Anemone” is inspired by D’Aboville’s affinity with the sea. In recent exhibits, she has constantly mined the sea for its forms, successfully translating them into sensuous, moving, tactile lighting fixtures in the material she favors, plastic.

“Float” is a floor lamp and a table lamp of ashwood veneer by Lilianna Manahan. Stark, simple and disciplined, the downlighting that is created by an opaque top of the same material creates a kind of halo around the fixture. The definite silhouette of the lamp’s body and the soft effect the light creates make for an interesting contrapuntal study on mass versus light.

The work of new and seasoned designers, as seen at the Hive display, can be viewed as an indication that there is an emerging standard and a hope, and that measures are being taken to raise the proverbial bar in an environment that is slowly being swallowed up by mediocrity.