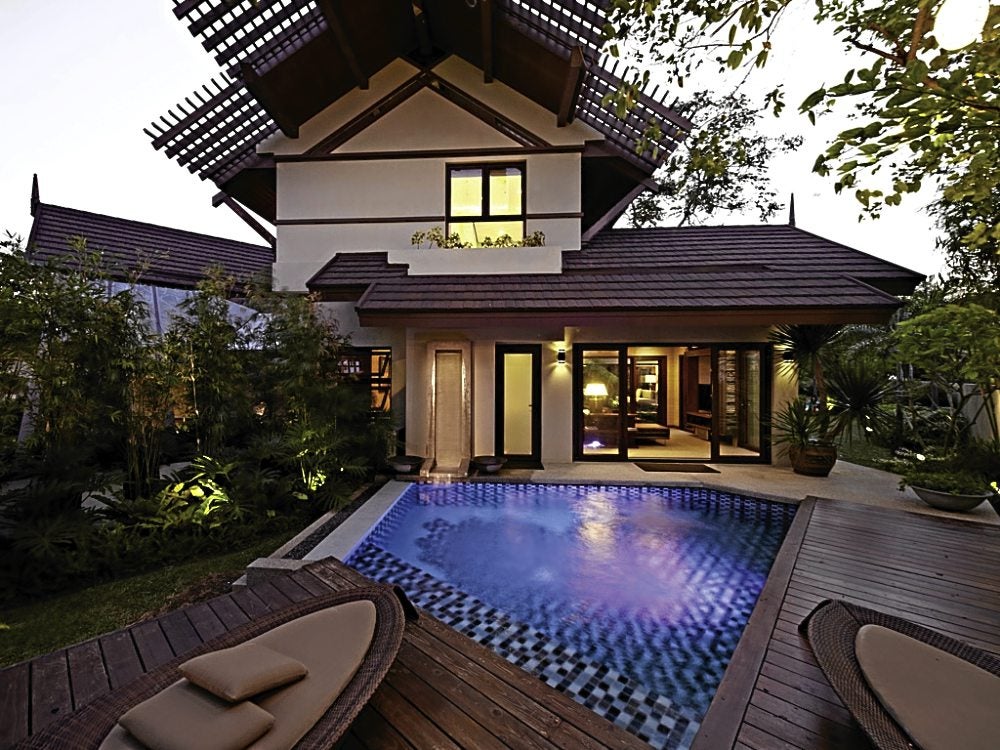 GELOMañosa’s house with tiered canopy evocative of the bahay-kubo. The pool is positioned in front of the house which gets maximum sunlight.

In the public eye, Francisco “Bobby” Mañosa, is known as the proponent of Filipino architecture who adapted the eco-friendly elements of the bahay-kubo (nipa hut) into commercial, residential and religious building projects.

He also set a trend in innovating and developing local materials such as coconut so they could be used in furniture pieces and surface treatments, which has consequently led to a robust export industry.

But to the Mañosa’s children, he will always be Peter Pan, in that everything in his life, including his work, is a game. When they were growing up, he amused them by playing hide-and-seek with them, by clowning or using building blocks for problem-solving activities.

“For dad, creativity was a way of life,” said Isabel “Bambi” Mañosa, the eldest of the architect’s three children. “Everything that we did with him was imaginatively fun, and we had to think out of the box.”

Their father often shifted the furniture and accessories in their house and asked them to guess the changes. His father designed children’s rooms thematically to stimulate their imagination. Bambi’s room had a slide connected to her bed, while the boy’s room had a jungle theme, replete with a real tree trunk.

At one point, Bambi, Francisco “Dino” Jr. and Angelo or “Gelo” worked for the family architectural firm before taking their individual career paths. Still, they ended up taking over the reins of Mañosa & Co. Inc. (MCI), which celebrates its 35th year this 2012. The business is under the holding company of Mañosa Inc., of which Dino is the CEO. Gelo is the CEO of the architectural firm, while Bambi heads Mañosa Interiors, a department of MCI.

“We’ve come back because there’s a transition,” said Gelo. “Dad is turning 81. When you look at a 35-year-old company, there’s a big advantage to taking it further as opposed to starting your company and taking it to 35 years.”

In an interview with the Inquirer, it was evident that Mañosa’s progressive thinking and strong familial ties have rubbed off on his children. They said they want to be purveyors of his vision of designing the Filipino home for the Filipino. However, they’ve put their personal stamp on the company, and have contributed to bringing it to the 21st century.

A graduate of interior design from Assumption, Bambi is gifted with an understated and casually elegant approach in composing elements.

The interior-design department has been established to complement the architectural project. In an era when furniture selection was limited, the company customized furniture, largely inspired by Filipino themes for the client.

“We believed in indigenous materials,” she said. “We can develop rattan, bamboo and weaves into modern applications. The banig can be made into a chair. With technology it can be waterproof and used for the outdoors.”

Unlike the darker interiors and pieces that overwhelmed the room in the past, the new projects exude an indoor-outdoor feel and are furnished with streamlined furniture.

“In my dad’s time, furniture design was for the Coconut Palace or for affluent clients who liked the feeling of royalty. The chairs were bigger and more intricate,” she said.

Today the company’s designs are more functional and streamlined, made to complement, not dominate, a space.

Mañosa Interiors will maintain its signature neutral palette with jolts of colors from nature. “If there was a big splash of color, it would be an accent piece or for a child’s room,” Bambi said.

“When I had some bright ideas, dad would say, ‘Don’t be so jeepney about it.’ He wanted the palette to be basic so that the beauty of the elements would come out. We’re also veering toward furniture that speaks for itself rather than fabrics and colors that attract too much attention.”

Outside of the family business, Bambi’s interest revolves around art and children. She studied art history in Paris and got a graduate degree in art education at the University of the Philippines.

Since Mañosa has inspired his children to give back to society by teaching, Gelo has been teaching at the University of Santo Tomas College of Architecture, Gelo and Manosa’s alma mater, while Bambi has set up her Creative Kids Studio, which teaches arts and organizing events for children. She also designs interiors and furniture for them.

“When my dad designed homes, he would talk to the mother about the children’s room. I like talking to kids and stirring up their imagination,” she said.

Like her father, Bambi engages her daughters in designing their own bedrooms and bathrooms, including the selection of materials. A kitchen under the brainchild of her daughter, Natasha Mañosa-Tanjutco, is in the works.

Gelo has created a name for himself as a proponent of green design. A founding member of the Philippine Green Building Council, he is pushing the Philippine Berde rating system, which assesses buildings for their adherence to sustainable design.

He admitted that he had once left his father’s firm to establish his identity in the industry. “Being under his shadow was a big challenge,” Gelo said. “I built up my own practice and philosophy with the same foundations.”

As the new CEO of MCI, he works with a team and partners in presenting an idea to a client. “It’s not a one-off design from the shelf. It has gone through so many revisions, so that when the client says, ‘Why not do this?’ we’d say we’ve tried it. In our presentation, everything has been cooked.”

Often asked the difference between his style and his father’s, he explained, “My dad’s philosophy was designing Philippine architecture that’s driven by culture and tradition. We’ve put that in the company’s core values.”

On his style, he incorporated the science behind climate-conscious architecture, based on his post-graduate degree in Design Computing and a certificate in environmental  architecture from the University of Sydney.

“I do the sustainable side of architecture—energy and water conservation, indoor air quality, design innovations, renewable energy, site planning, studying the sun path and how heat affects structures,” said Gelo.

“My dad looked at the bahay-kubo, which is a very green structure,” the young architect added. “Using the same bahay-kubo fundamentals, the architecture transcends into a green house. Today there are new ways of thinking and tools for building information modeling. Computers can model sun paths or how much heat will affect a structure even before it is built,” he said.

He showed an image of the sun path at its peak at a certain time of the day in a corner of the house. “You can put a sunshade, use thermal concrete or build a pond. The problem is addressed before it happens on the drawing board. My dad addressed the problem during construction because the technology was not available then. It was more expensive. Now we can measure how a building is affected by the environment beforehand. There’s more technology now like solar panels and solar heaters which are more available now.”

One of MCI’s newest designs was building a house made of recycled container vans. “The client had a lot of them and he wanted to cut cost,” said Gelo.

Although MCI’s projects maintain the trademark salakot-inspired pitched roof topped with a finial and the spaces derived from the bahay-kubo, Gelo puts his own signature. “I’m a believer in pushing design forward. But nowadays the trend looks to the ’50s or postwar architecture with low-pitched roofs. When I design my buildings we do a vernacular design, but it will also depend on the client. I prefer that modern architecture should have time and place. We use new materials which defines contemporary architecture.”

While Gelo’s playground was the construction site, Dino was geared to be the businessman in the family, thanks to his mother Denise. Dino worked in real estate and took up masters in entrepreneurship at the Asian Institute of Management.

He said his father was uncompromising of the company’s artistic and professional integrity that it had missed opportunities. Dino recalled that during the Asian crisis when MCI was keeping its head above water, clients insisted on a Mediterranean look. The elder Mañosa refused the projects, insisting that he would stick to his vision of Filipino architecture. He also nixed a major developer who wanted to use his name on their design. On the other hand, his father rightfully turned down an offer from a conglomerate, foreseeing dishonesty in the dealings.

The elder Mañosa always advised to choose clients properly and not just don’t grab any project. “He told us to know when to cut ties and say it’s not working,” said Dino.

With Dino’s administrative skills, the company has been growing in “leaps and bounds” in the past five years with more professional management and income from residential and corporate projects.

He established Mañosa Properties Inc., which designs and builds homes for the end-user, following the company’s design principles. The company’s emphasis is on livability not profitability.

Its first venture, Lantana Lane, a 14-unit town house development in New Manila, derived its design from the bahay-kubo and the bahay-na-bato. While most developers would maximize the land by building and selling, more than 60 percent of the property is devoted to open space. The homes make use of local and recycled materials and the landscape is cultivated with indigenous plants. “Nobody cared then. Now there’s a demand for quality housing, he said.

As in any Mañosa project, the developers considered the Filipino penchant for gatherings and celebration. There’s a roofdeck that’s designed for chilling or for barbecues. The open plan provide flexibility for entertaining and even additional bedrooms for guests.

The homes were initially priced at P19-P22 million. The buyers were able to resell the townhouses at P30 million.

On the rise is Ylang Lane along Ylang-Ylang Lane in New Manila with seven townhouses of 320 sq m, costing an average of P25 million. “We’re putting in more green features, better ventilation, more efficient windows, rainwater collection, a roof garden on the top floor to cover the heat.”

A still-unnamed project is on the rise, a 3,000-sq m property along Campanilla Street, also in New Manila.. It will have bigger units of 400- to 500-sq m single detached homes which will cost P40 million. “We’re calling it the ancestral homes of the future,” he said.

On the company’s success, Dino keeps a tight ship. “We’ve evolved in the past five years. What I brought in was to professionalize everything especially when you’re around artists. Since this is a family business, there will be personal issues which we discuss outside. Problems in family business are caused by breakdown in communication. We siblings meet weekly, like breakfast once a week. Dad is also updated so we get his blessings.”