Where and what to eat in Siargao | Inquirer Lifestyle ❮ ❯ 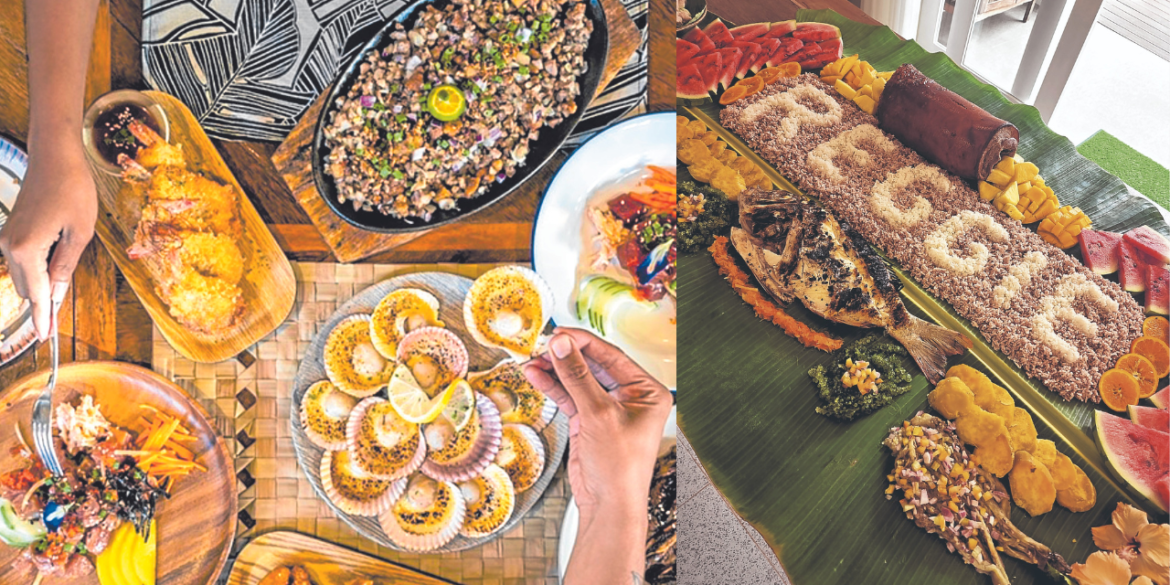 LEFT: Best “sisig” and scallops at Haole’s | RIGHT: My very own boodle fight

Where and what to eat in Siargao

A teardrop-shaped island situated in the province of Surigao del Norte, Siargao is magical.

According to former Surigao del Norte Gov. and now Gen. Luna Mayor Sol Matugas, Siargao has much to offer the nature lover. “We have everything, not just the sea. Siargao is paradise.”

Indeed, the island is charmed and blessed by a culture unique in itself. This it owes to its community of surfers, both local and international.

Siargao has become a melting pot that dances to its own beat. To be on the island is to embrace its own way of life.

While curating the itinerary for my culinary tours for “Kitchens of the World Philippines,” I came across some of the best restaurants and delectable treats that can be had only in Siargao.Siargao ‘lechon’ and ‘ensaladang talong’

Manileños who have settled in the island said that they have not come across a bad lechon in Siargao, and I agree.

Throughout my stay, I tasted many and all were delicious, especially the one served during the birthday celebration of Samuel Sy at the quaint MuniMuni Villas, owned by Carlo Tanseco.

The lechon, prepared by Dioscoro Villar, was stuffed with a mix of red and green bell peppers, chili, lots of garlic, onions and black pepper. Needless to say, the skin was crisp and the meat was fall-off-the-bone. It was so tasty and aromatic. It had no need for sauce.

I learned from Mayor Sol that there is a lechon culture in Siargao—that is, families raise their own native pigs to slaughter and roast themselves.

“Buying pigs and making them into lechon isn’t done here,” she said. “The reason our pigs are delicious is because we raise them ourselves, and they are not fed with commercial feeds,” she added.

The spread that evening, though simple, remains unforgettable for its impeccable flavor.

Inheriting her culinary prowess from her father Dioscoro, Aimee Villar was tasked to prepare Samuel’s birthday spread, and flexed her skills with a menu that consisted of the best ensaladang talong, made like a kinilaw with coconut milk. The smokiness of the charred eggplant with tomatoes and onions, steeped in acid then slathered in coconut milk, is unforgettable.

It is rare to find a buffet wherein all the dishes are equally satisfying.

Aimee’s cooking style is greatly influenced by her six-year stint in Thailand. When in Siargao, savor her food at the Nook Bar.Aperol spritz and sangria

Who would have thought that I’d find the most exquisite Aperol spritz in Siargao? It’s mixed to perfection. It was my comfort drink of choice on the island, to quench my thirst from the excruciating heat.

Its creator is Jordi Roca, the manager of MuniMuni Villas. He also makes an authentic Spanish sangria—and rightfully so. Jordi is a surfer who hails from Barcelona, who now calls the island home.

Everyone has their own rendition of sisig. A new addition to my list of favorites is the one cooked by Gino Ortiz.

The process of making it is tedious—it’s boiled, grilled and fried!However, the hard work Gino puts into the making of this dish sure pays off—the taste and play of textures of his sisig is fantastic; the depth of flavor, phenomenal. I would order two initially, all to myself. It is that good!

Surfer Gino is the owner of Haole Surf Hostel. He is also the chef of the hostel’s restaurant.

I agree when Gino said that being a restaurant owner in Siargao can be very tough, as the island plays host to many good eateries.

That said, Gino has made a name for himself by stamping his dishes with his own identity. His scallops covered in a creamy cheese sauce are so addicting!Boodle fight ‘lechon’ and ‘lechon’ belly

I was presented with my very own personalized boodle fight by tour guide and boodle fight artist Donneffer Jagos (tel. 0905-7246729).

It was beautifully decked with island offerings. Donne intimated that the food he showcases depends on the catch of the day and what is available in the market. He boasted of how nothing on his spread has ever been frozen—kinilaw na isda, lato, inihaw na talong, grilled fish and a tasty lechon belly specially cooked by Macoy Tinio, whose lechon belly is turned constantly by hand over charcoal for hours on end, until the skin is crisp and the meat soft.Macoy marinates the pork belly in his own secret blend of herbs and spices. He also roasts whole pigs.

When in Siargao, I recommend that you try Kurvada, a level-up carinderia. We ate there more than once, as I was thoroughly impressed by their offerings, all delicious and so affordable. They even serve half orders!

My personal picks are their couscous, potatoes with giniling, gado-gado, giant meatballs and my absolute favorite—vegetable lumpia that sells for P10.

Like my Aperol spritz, who would have thought that I’d find such well executed hummus with freshly baked pita bread in Siargao?

At Bliss is where I found it, and I was pleasantly surprised. Exquisite in every way, it had the right ratio of garlic and cumin. Had with the hot pita, it was simply divine!

Their schnitzel with aglio olio was delish, too.

I remain enamored with Las Palmas Resort’s Ube Cheesecake. Not only is the ube so pronounced, but it is also the creamiest and richest rendition of it that I’ve had. So smooth and heavenly. No wonder the slices are small; each bite can only he compared to having a spoonful of Nama chocolate. Sinful!

For me, Siargao is where nature is expressed at its finest. It is where its inhabitants live as they wish. It is also a food lover’s paradise, where one-of-a-kind memories are made.