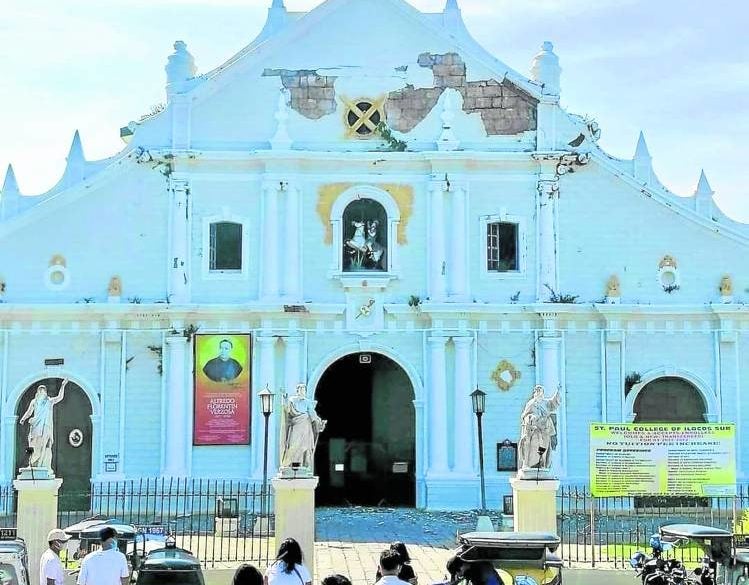 On Aug. 17, 1983, a magnitude 6.5 earthquake in Luzon badly damaged a number of heritage sites, mostly churches in the northern region, particularly in Ilocos Norte.

It’s history repeating itself after almost four decades, as many churches dating back to the Spanish colonial period and other old structures were damaged by a magnitude 7 earthquake on the morning of July 27, with an epicenter west of Tayum, Abra.

These included those that are part of the World Heritage List, those declared National Cultural Treasures (NCTs) by the National Museum, and those considered important cultural properties (ICP), structures that are at least 50 years old.

Among those affected by the 1983 earthquake and affected anew by the recent tremor are the Sarrat Church with dislodged pieces of bricks on its Epistle side, the Laoag belfry also with dislodged bricks, and the Sarrat old municipio.

In the province of Ilocos Norte, other heritage structures that were affected by the recent quake include the San Juan Bautista Church convent in Badoc with minor damage; ruins of a Spanish-era structure in Alogoog, also in Badoc, which partially collapsed; the Bacarra Church convent which was partially damaged; and a portion of the window of the San Agustin Church convent ruins in Paoay, with dislodged bricks.

In Abra, the church of Santa Catalina de Alejandria in Tayum sustained major damage with cracks on its facade and walls, a collapsed third story of its belfry, and collapsed central and side retablos.

Built in the 19th century by the Secular clergy, the church’s unique features are finials at the back resembling the Ilocano earthenware jar called burnay and plastered brick retablos, a feature particularly known in the churches of northern Luzon. The church was declared an NCT in 2001.

Also in Tayum, the Gabriela Cariño Silang Gallery of Fine Arts incurred damage, not structurally, but because of the destruction of many artifacts, which were dislodged from exhibition shelves. The gallery announced that it is closing permanently due to irreparable damage.

In the capital Bangued, the San Lorenzo Shrine located in the town’s cemetery, which most likely functioned as a mortuary chapel, was damaged badly with a collapsed left-side belfry and a cracked right-side belfry.

In Bucay, the first provincial capital, the central portion of the portal to the Casa Real Fort was damaged due to the tremor. The structure was the only substantial piece of infrastructure that survived to this day inside the fortified part of Bucay, built no later than 1848, and which the locals call Casa Real.

In La Paz, the church of the Iglesia Filipina Independiente, which dates back to the Spanish period, was also badly damaged. Dedicated to the Nuestra Señora de la Paz, the church incurred huge cracks to its belfry and facade.

First on the list is the San Pablo Cathedral, commonly known as the Vigan Cathedral, the current seat of the Archdiocese of Nueva Segovia.

Built from 1790 to around 1800, the cathedral is part of the Historic City of Vigan, inscribed in the United Nations Educational, Scientific and Cultural Organization (Unesco) World Heritage List in 1999 for being the “most intact example in Asia of a planned Spanish colonial town, established in the 16th century” and for being an important international trading port prior to the arrival of the Spaniards.

The damage in and out of the cathedral includes the facade, where a portion of its palitada chipped off, cracks and the chipping off of palitada on the interior walls, and the big cracks on its flying buttresses, an architectural feature that is rare in the Philippines.

The cathedral’s freestanding belfry was also damaged, with parts falling down to the street, as well as the Arzobispado de Nueva Segovia building beside the cathedral itself.

Apart from the cathedral, a number of mid-18th- to late 19th-century heritage houses were also damaged, all part of the 233 historic buildings inside the Unesco-inscribed World Heritage Site.

Also damaged is the Syquia Mansion, the house associated with President Elpidio Quirino who married Alicia Syquia, a descendant of the original owner of the house built in 1830.

This house-turned museum incurred cracks on its walls just like the other aforementioned houses, and a number of artifacts displayed inside were also damaged.

In neighboring Bantay, the late 19th-century church dedicated to San Agustin had cracks on its walls and collapsed portions of its exterior walls.

Its belfry, located on a hill not far from the church and which doubled as a watchtower against enemies, was also badly damaged.

This structure was declared an NCT, together with the belfry of Laoag in 2015.

In Sta. Maria, the World Heritage Church of the Nuestra Señora de la Asuncion complex was damaged by the quake with visible crack on its facade, damaged topmost portal to its old cemetery, and a damaged portion of a window of its mortuary chapel.

The church complex had recently undergone restoration works by the National Historical Commission of the Philippines (NHCP) and National Museum, and was turned over to local church authorities in December last year.

Minor damage was also reported at the Cariño House (now Candon City Museum), which was declared an ICP in 2015 and restored by the NHCP from 2018 to 2020, and the Bessa and Rodriguez ancestral houses, all in Candon.

The church of Balaoan in La Union was also damaged by the earthquake.

In other parts of the Cordillera, the Mt. Data Hotel in Bauko, Mountain Province, suffered minor damage. The hotel built in the 1970s was the site of the Mt. Data Peace Accord on Sept. 13, 1986, between the Philippine government and the Cordillera People’s Liberation Army of rebel priest Conrado Balweg.

In Besao, also in Mountain Province, the St. Benedict of Nursia Episcopal Church in Kin-iway was also affected by the tremor. One of its stone arches supporting the roof cracked, forcing local church authorities to close the church, pending further investigation by experts.

Built around 1939 to 1940 and consecrated on Oct. 28, 1941, the church was designed by a certain Mr. Bergamini with the Japanese Mr. Sato as chief carpenter.

In Cagayan Valley, at least two heritage churches were affected by the quake.

These are the Santo Domingo de Guzman Church which had minor cracks in Lal-lo, the town where the Archdiocese of Nueva Segovia was first founded as a diocese in 1595, and the ruins of the San Vicente Ferrer Church in Tocolana, also in Lal-lo, where a side wall collapsed.

In one of his important church history articles in the Philippiniana Sacra journal, historian Regalado Trota Jose notes that a big part of the Lal-lo church dates back to the 17th century, while the church in Tocolana might have also been built in the same century. Both are Dominican legacies in northern Luzon.

There was also a report of damage at the San Pablo Church in San Pablo (Cabagan Viejo), Isabela, but the Diocese of Ilagan said no damage was reported within its jurisdiction.

In a statement the day the earthquake occurred, NHCP chair Rene Escalante assured the public of the restoration of the national cultural patrimony affected by the tremor.

“The NHCP, in collaboration with the local government units and cultural property owners, expresses its commitment to help rehabilitate the damaged historic sites and structures, as many of them have been part of the lives of the people for centuries,” he said.

Escalante, who also chairs the National Commission for Culture and the Arts, added that many of these damaged buildings are protected by the heritage law.

“We enjoin our local partners to safeguard the artifacts, retrieve important parts of the structure necessary for the restoration, and provide NHCP with necessary documentation of the destroyed structures and the retrieved parts,” he said.

The National Museum also assured the public of its help in the restoration of the said structures.

“As for our declared built heritage structures and sites, we commit ourselves to all the collaborative efforts for their rehabilitation and restoration,” it said. “We commend our partners in the local government and private sector who took the initiative to document the damage incurred by them and secure the movable objects contained therein.”

A number of the church complexes damaged by the earthquake were purposely built with consideration of the seismicity of the country.

These churches were built with huge buttresses and a separate bell tower, a style of Baroque architecture called Earthquake Baroque, which is typical of Ilocos Region.

The separation of the church structure with the belfry is to avoid further damage in either edifice in the event that any one of these two collapses.

Elsewhere in the country, detached belfries are located in Jaro, Iloilo, and in Loay, Loboc, and Baclayon in Bohol. —CONTRIBUTED