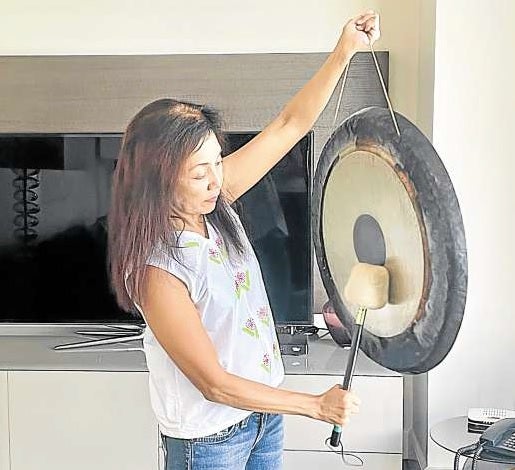 Rosan Cruz uses the gong to clear up negative vibes in a space.

As life returns to normalcy, mindfulness and healing programs have gone hybrid—half digital and half on-site.

Healer Rosan Cruz finds the virtual gong sound bath is very popular, though she has been conducting in-person sessions for individuals and out-of-town retreats. Still, one can attain the relaxing and stress-busting benefits of gong sound healing with a headphone and a Bluetooth speaker.

Cruz trained under gong master and kundalini yoga expert Don Conreaux. In a YouTube video, he explains that the gong has the power of a 100-piece orchestra. “When you play it in volume, it reduces the noise around you until you can’t hear anything except the sound of the universe … It’s like the mother sound of om, the healing sound. It makes us resonate.”

Conreaux adds that the gong bath keeps the mind youthful and activates the heart, mind and parasympathetic nervous system, which he calls the “24-hour repair system.”

Says the gong master, “When you hear the gong, the degenerative process is suspended … The gong doesn’t heal you, but it puts you in a place where the innate intelligence can heal the body just like sleeping at night.”

Before the pandemic, Cruz held traditional sound baths in a packed studio. Participants laid down in a circle while Cruz struck the gongs. They immersed themselves in the calming vibrations of the gongs.

These vibrations led them into a deep state of relaxation.

As restrictions eased, the group sound baths have been performed along the seaside and other open spaces.

Advocates of the sound bath claim that it reduces fatigue and anxiety, improves sleep and removes blockages in energies.

In livestreamed sound baths, Cruz underscores using headphones that allow the frequencies to travel faster and impact the listener. They also filter out the hissing sounds from computer speakers.

Cruz notes that the gong bath and theta healing therapy, another of her modalities, share similarities.

During theta healing, the practitioner uses meditation techniques to put the client’s brain waves into the theta frequency, a deeply relaxed but alert stage. This enables the individual to think clearly and be open to changing self-limiting beliefs and blockages.

“Unlike in theta healing, there is no talk in a gong bath. The sound vibrations will put you into a meditative state where you can access the subconscious and clear negative impressions. As you dig deeper into the root cause of your limiting beliefs, you eventually release. We will replace your program,” Cruz explains.

Cancer patients come for a sound bath before their chemotherapy. It reduces their anxiety and lethargy after the session. Caregivers and family members, who join the sound bath, become more empathetic without being drained.

Cruz continues the virtual Scent and Sound Baths, wherein healing oils and affirmations are sent to participants. For 10 days, they apply the scents while internalizing the affirmations that harness their powers.

Lately, she has been getting more requests for clearing sound baths at home.

“People have been cooped up in their houses throughout the pandemic. There have been deaths, separations, sadness—a lot of heaviness in the atmosphere. When there are fights, the vibrations stay at home. If you must argue, do it outside,” she says. Cruz brings the gongs to the site to neutralize the negative vibes.

The gong will play a prominent role yet again at the Rebirthing Weekend Retreat at Subli Eco Center in Calaca, Batangas, on Aug. 19-21. Cruz uses kundalini, a kind of yoga that involves breathing and chanting with coordinated movements to achieve a spiritual awakening.

Rebirthing meditation and kundalini exercises aim to release the negative impressions or emotions in the subconscious that lead to personal transformation.

Sound healing plays a vital role in helping the participants enter into the right mind state.