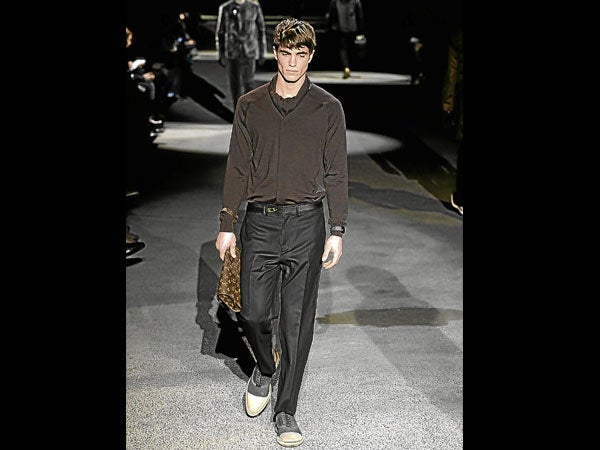 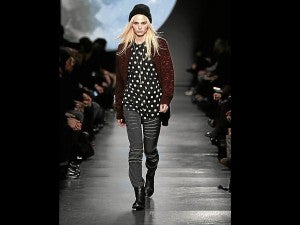 Neoprene was in abundance. One had a visual of James Bond rising from the water near the shore, or climbing the ladder to his yacht. Tuxedo jackets were matched with the suits and reinterpreted in various ways. One could see strikingly interesting sporty zipped versions with trompe l’oeil lapels, and another, deconstructed, the back of the jacket revealing a set of “ribs,” as Gaultier does with his corset for women.

Then there was the trendier but no less stylish James Bond clad in a skirt over pants and a silk harness-cum-tuxedo vest. Several looks were inspired by protective or functional gear, such as a jacket cropped almost to the chest, an arm band and a reinterpreted holster pouch, which in the show was strapped on the model’s leg.

In the sea of black were printed pants and scarves, and trademark Gaultier striped T-shirts (red and blue instead of blue and white).

Constellations were the backdrop during the Spring/Summer show; for the Fall/Winter, it was a large moon, and the clothing reflected its colors, the most apparent leitmotif in the show.

The first out was a midthigh silver jacket; a similar style in slate followed suit. A khaki jacket with a slight sheen to it looked exceptional paired with a heathered gray cowl-neck sweater and dark khaki boots. The theme continued throughout the whole show in incarnations of gray. A faux fur coat carried the same theme, and then again in a “puffy” coat that looked part crater, part leopard.

The fabric of black and silver pants was seen on the lapels of one jacket. Another lapel was lined with silver, and a vest in gray was layered with just a peek of shine.

Blue cotton pants with a slight sheen had diamond-shaped cutouts on the knees. The same blue was seen in a matching jacket.

Orange and bright yellow were like a shot of deep sunglow amid the silver. A few red and orange pieces completed the tight theme. Bags had the same aesthetic. 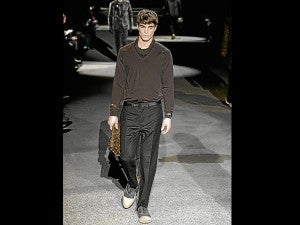 According to the press release about the show, “Men’s Studio director Paul Helbers, under the artistic direction of Marc Jacobs, has explored the ultra-simplified elegance of Amish style… which is why this collection is almost all black to emphasize shape and technique. Jackets are sculpted around the body almost like shields.”

Jackets came in various interesting designs: Velvet, monogrammed, bright orange silk and fur-lined leather. A particularly interesting lightly padded jacket was made of waterproof fabric, its chest a trompe l’eoil of a vest.

Band collar shirts and jackets, in their simplicity, emphasized the Amish intent of the collection, as did the hook and eye closures that replaced buttons.