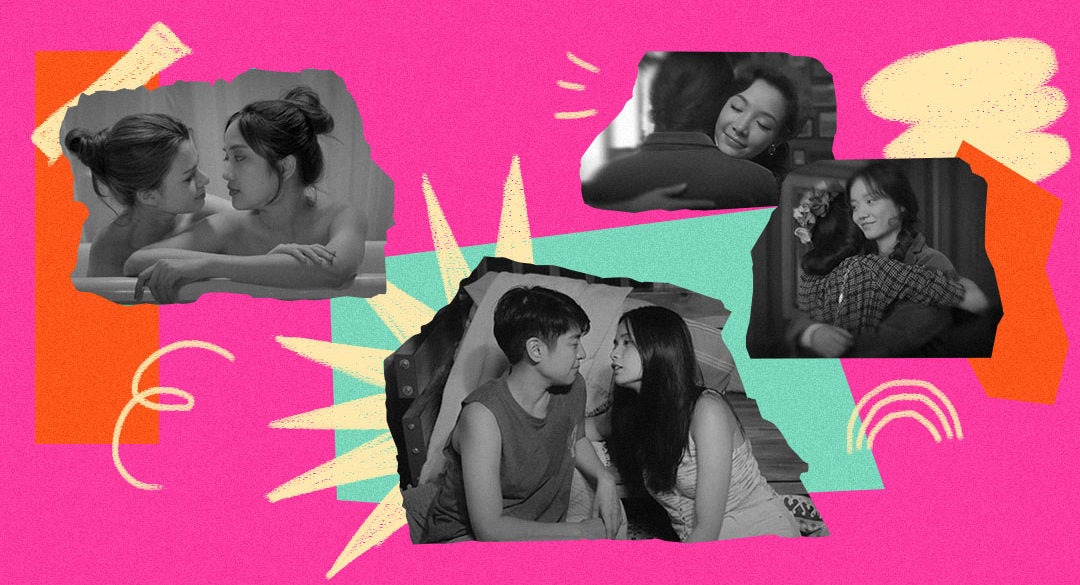 There have been too many sapphic shows that have been canceled too early (like “First Kill”) or don’t even make it out of development hell. So when we do get representation on shows, hyping them up really does make a difference. Newsflash, producers, we want more. See how we ate up “The Rich Man’s Daughter” and “Pearl Next Door.”

In anticipation of the upcoming GL series “Sleep With Me” (which we’ll be talking about more in-depth real soon), here are some local and other Asian GLs that may have missed your radar but are worth checking out.

Director Sigrid Bernardo (“Ang Huling Cha-Cha ni Anita,” “Kita Kita”) made her comeback earlier this year with “Lulu.” The eight-part GL rom-com follows the story of bubbly Sophie (Rhen Escaño) who goes to a beachfront Airbnb to heal from a breakup. There she meets chef and guitarist Abi (Rita Martinez) who I’m pretty sure is a lot of people’s dream girl. Will Sophie pursue this romance? She better! (Fun fact: Possible Oscar contender Dolly De Leon is also part of the cast.)

We’ve talked about “BetCin” before and we’re about to do it again. Kylie Padilla and Andrea Torres star as social media power couple Beth and Cindy who end up entering a social media sweethearts contest that forces them to confront the strain in their relationship. Can they ham it up for their audience to win the prize or will they break up? Joining the cast is our fave Chai Fonacier as Simon, who a lot of the show’s fans are crushing on.

Here’s one for the queer women who’ve gotten their hearts broken by too many men. “Fluid” stars funny woman Roxanne Barcelo as Mitch, a girl who’s fed up with cheating ex-boyfriends. She ends up trying lesbian dating app Les Go to no sucess. But then, she meets and starts falling for George, played by model and beauty queen Ann Colis, at a party. Mitch’s ex comes crawling back and, personally, it’s fairly obvious who she should pick. Sorry, Joross Gamboa.

Thailand’s first full GL series “Gap” is almost here. Mon (Becky Armstrong) is a fresh grad who decides to work as an intern for the company where her longtime crush, chairwoman Sam (Freen Sarocha Chankimha). However, Mon immediately finds out that Sam is a mean boss unlike what the media portrays her to be. Maybe Mon’s better off looking for another girl to love.

If you like romances set in the past, “Couple of Mirrors” is for you. Set in early Republican China, it follows the story of socialite and author You Yi (Zhang Nan) whose perfect life is turned upside-down when she discovers that her husband has been cheating. She ends up finding comfort in a photographer named Yan Wei (Annie Sun). But Yan Wei has a deadly secret that might get in the way of their happiness.

If you’re a fan of the fantasy BL “Heaven Official’s Blessing,” “Legend of Yunze” may be the GL counterpart of the show that you’ve been looking for. Cultivator Jiang Zhao Yun’s (Wang Lao Ji) sword leads her to a village where a mysterious woman named A-Ze (Peng Jing Xian) has appeared. Sensing something strange in the village, the pair investigate and come to realize that humans can sometimes be crueler than demons. You might also want to check out another historical fantasy GL called “Led Astray by Love” for an element of crossworld travel.