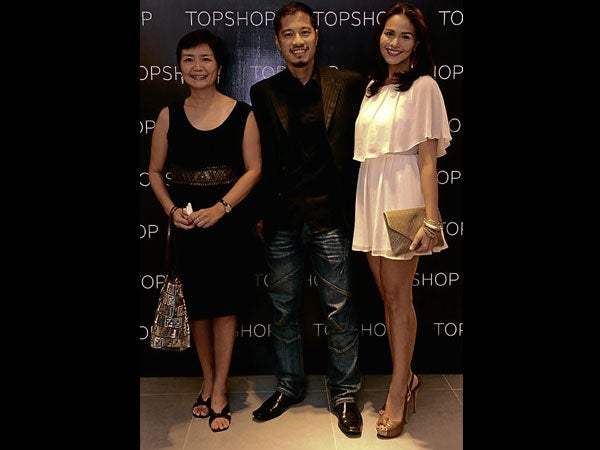 And if you’re a shoe freak, you’ll go gaga over Topshop and Topman’s latest collection.

(Moi noticed that only a handful of the invitees belonged to the privileged arena, while others were models and celebrities who just wanted to get their photos in the papers. Oh, well.)

The best part for shopaholics was when Topshop and Topman held amusing games, with winners getting gift certificates and cool items from Canon Digital Center, Shu Uemura and Hillsborough Car Spa, palanggas.

The finale, dahlings, had Topshop and Topman announcing 20-percent off the regular items, while the first 50 buyers on queue got 50-percent off their vouchers. The first 100 shoppers in the line got a limited-edition shopping bag from either Topshop or Topman for spending P1,500. Big-spenders—those who spent at least P3,000—got fabulous purses and trendy trilbies.

But the bottom line is you can express your hip high-street fashion at Topshop and Topman’s flagship store at the second level of Robinsons Galleria, which is the exclusive franchisee in the Philippines.

A new travel magazine, Lifestyle Asia’s Visual Chronicles, was unveiled at Greenbelt 5 Fashion Walk. Guests had the chance to go to exciting places through an exhibit of photographs by the magazine’s Global travelers, die-hard travel hobbyists who captured images and glimpses not normally seen in the usual travel guides.

Young and smart Isabel Martel Francisco caught the Paris she loves and the spirit of the French capital in her photos, while cousins Natalia Zobel and Ava Pessina’s family adventure was a visual feast of South Africa, palanggas.

Après viewing the digital images on display, Lifestyle Asia editor in chief Anna Sobrepeña offered a toast to “all of you who had generously obliged to share your photographs, in our first published April travel issue.” The launch elicited loud applause from the hotshots present, including Mega Publishing Group president and CEO Sari Yap and Lorraine Belmonte, who’s based in Miami, Florida, dahlings.

I was thrilled. I didn’t have to pay an outrageously priced business-class ticket to visit some of the world’s best sites. The exhibit was a trip to those places in itself.

After the awesome Fashion Week, I zoomed in to the chic Fever Luxe Lounge at Sofitel Philippine Plaza for the awesome “after-party” hosted by renowned brand L’Oréal Paris, in partnership with another French brand, Moet Hennesey, naturellement!

Designers, models and personalities that swear by L’Oreal had a blast with free-flowing Belvedere, cocktails of lychee martini and single malt Scotch whiskey, which got the invitees on high spirits.

Later, the guests were on a roll rocking the tent to hip-hop dance tunes spun by DJ Mars Miranda.

“We are very proud and honored to have been a part of this year’s Philippine Fashion Week Holiday Collection,” said trés charmant monsieur Luc Oliver-Marquet, dashing managing director of L’Oréal Paris Philippines. “We are here not only to set the trends of tomorrow, but to make runway-ready looks accessible to every Filipina.”

Après he left the mic, there were individuals who were brought in by some invitees. One of them boozed it up and later told his friend, “Hey, this really is a cool party dud, who is giving it?”

Oops! And would you believe he even didn’t want to go home and he had to be dragged out by his gang?