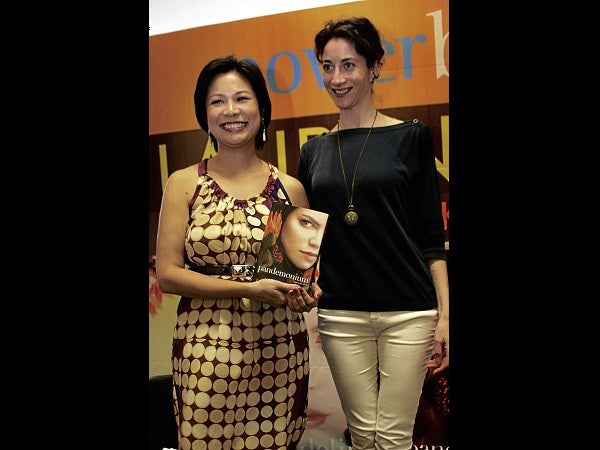 Last Sunday, Lauren Oliver, author of the popular Delirium trilogy, popped by Powerbooks Greenbelt for a book signing, and even had time for an intimate lunch with five of her fans. Super was able to corner Lauren before the Powerbooks fandemonium ensued and found out interesting things about her—she grew up with a dad who writes about real serial killers, she loves to hang out with her fans, she’s grateful to bloggers, got engaged after three weeks of dating her fiance and is addicted to tattoos, each having an interesting story.  We press her some more about who Lena is really going to end up with and what’s in store for her loveless world.

How did this tour come about?

I don’t know actually, but I know that I had been getting tweets from people in the Philippines who were really enthusiastic fans and I guess Harper, my publisher figured out there was a real readership here that would be happy to see me. So they tucked me in a plane and here I am.

We heard that you got your inspiration for the trilogy while at the gym.

Yes, I was on the treadmill—I find that most of my breakthrough ideas happen when I’m either in the shower or at the gym, I decided to write about the theme of love and also from these swine flu/bird flu panics thinking about how the media can drive people into a panic over these perceived epidemics, and then I started to look at love and its symptoms, the distraction, the inability to focus, sleep destruction, weight fluctuation—it really has a lot in common with psychiatric disorders, so that’s where the idea came from.

How similar or different are you from Lena?

You have to put yourself into every character to some extent, so certainly some of Lena’s fears and anxieties—fears of not being special or not being loved or if people were allowed to choose that she wouldn’t be chosen, I think I went through those same anxieties growing up, I think everybody does. In other ways I wasn’t as obedient as Lena was in the first part of the story. However, I think I have kinda some of Lena in me, I have some of Hana in me, I think you have to put some elements of yourself in every character in order to make them live, but then again you also have to change things, ’cause you’re not just writing an autobiography all the time.

Despite your busy schedule, you still manage to engage your fans on Twitter and Facebook, how do you manage that?

Well it’s hard, it’s a really hard balancing act, I really try to be there for my fans and be able to interact with them. I really try to respond to their messages to me, sometimes I wish I could actually be more present in social media and stuff ’cause it’s very important nowadays but you have to preserve the time to write, I think that’s the most important thing—you have to actually get the books done.

Have you ever had fans tell you to get off Twitter and go back to writing?

No, I haven’t yet but that would be so funny though. I have had fans threaten to steal my computer and read the next book.

You love to interact with bloggers and hung out with them during a tour in Georgia, how did that come about?

From the start of my career, even before the Delirium trilogy came out, with “Before I Fall,” my first book, bloggers had a really big influence on the success of that book so it was a really good word of mouth, so I’ve always felt a debt of gratitude to bloggers. In Georgia one of the girls that we hung out with, I’ve been e-mailing with her since she was sixteen years old, even before my first book came out and she found out about it and thought it would be something up her alley. I was one of the people she first told when she got into college, I wrote her letter of recommendation, so we’ve really had a good relationship throughout her high school years and this was the first time I was able to meet her in person, so it was really, really special.

Was there ever a time in your life that you wanted to be “cured” of the love disease?

Definitely. A lot of where the book came from was that I’ve had my heart broken before—for anybody who’s ever had their heart broken and devastated, I can remember times where I felt like I just wanted to get it out—it was so painful, I would rather never have the highs again just to go without those lows and when you see people who get broken up with, it’s really a physical disorder, it takes over their whole life. People get through it but at that time it doesn’t seem like you will. I also lost my best friend and my ex-boyfriend died in 2009 and that was a really, really, really devastating time for me, still really, so definitely there were times when I wished I could be cured of it.

Having said that, you recently announced your engagement on Twitter, will this current state of happiness affect how Requiem will turn out?

The third book is dedicated to him, my fiance. The thing for me is that I’ve always been very heart-driven, I’m a really passionate person, I believe in following your instincts, being ruled by that gut, so I think partly what has made me in the past want to be cured is ’cause I’m so likely to give my everything when the opportunity presents itself, and similarly with my fiance, when I met him we got engaged after three weeks, so it exemplifies the way I feel about emotion so I don’t know that it has changed me so much or that it has changed the way I’m writing, it’s just been a kind of reaffirmation of the way that I’ve always lived my life and some of the issues I’ve wanted to unpack and discover when I was writing Delirium—the Delirium trilogy, what’s good about it is not just that I got to write a romance, it’s that I got to write about love; what that means and what it means to friends, family, which is great.

Your books have been optioned for films, who would you want to play your characters?

My standard answer to this is that I’ll take anybody except Justin Bieber.

Not even as Julian?

Who are your writing influences?

A lot, I feel that to some extent I’m influenced by everything I read, even books I read that I don’t like. My dad is a huge influence on me, he’s a writer as well, he writes non-fiction books about true crime, he primarily writes about serial killers, yeah, it’s pretty awesome, it’s very different, but he really has influenced a lot of the way I think about writing and a lot of my reading habits, too. My mom as well, my parents are both literature professors, so we really grew up in such a reading culture, our house is filled with books, and that’s been hugely influential.

Have there been fans rooting for Julian and Lena?

I have, there’s a Team Julian. I think in young adult books, it’s always the first love that’s hard to beat but you know the truth is, in real life people almost always never end up with their first loves, and it’s not usually the right thing either.

Is that a spoiler?

Do you Google yourself?

Sometimes, but only very rarely I try to stay away from it, I’m just wincing because I did today, but it was because I got a tweet from a guy I used to date 10 years ago, and he was, “When did you become famous?” and I haven’t heard from him in years. I was trying to figure out how he found out about me, so I was Googling to see what pictures of me would show up if he Googled me, but I try to stay away from it.

We know you’re not supposed to, but could you share something about Requiem? Are we going to be happy with the ending?

I don’t think the ending will make anybody throw the book against the room, so that’s good, ’cause a lot of people have done that for Delirium and Pandemonium. I think the ending will be satisfactory to many people, I can’t share very much, I can say that it takes place in two different points of view, different from Lena’s which is interesting and was fun for me to write.

Delirium and Pandemonium are available at National Book Store and Powerbooks.