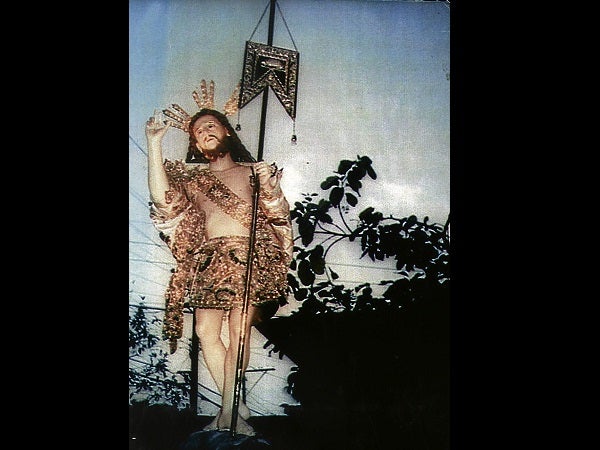 Meng Canlas, executive director of ABC Promotions, Inc. which produces the “Seven Last Words” on Channel 13 has asked Archbishop of Manila Luis Antonio Tagle to reflect on the 7th Word (“Into your hands Lord, I commend my Spirit”) this Good Friday, April 6, 12 noon-3 p.m.

It was a special request in memory of her late father, Bro. Ben Canlas, who began the program 25 years ago. The Seventh Word says: Good Friday, April 6 from 12 noon-3 p.m. on Channel 13.

Canlas, who directs the show, recalled that the first years of the production were difficult. Ambassador Antonio Cabangon-Chua helped the program year in and year out through his companies (Fortune Life Insurance, Fortune Care, Eternal Plans, Inc., Eternal Garden Memorial Park and DWIZ).

The following priests will reflect on the rest of the last words of Christ: Fr. Bong Guerrero (“Father, forgive them for they know not what they do”); Fr. Anton Pascual (“Today, you shall be with Me in Paradise”); Cubao Bishop Honesto Ongtioco (“Woman, behold your son, Son, behold your Mother”); Fr. Arlo Yap, SVD (“My God, my God, why has thou forsaken Me?”); Fr. Erick Santos (“I thirst”); and Msgr. Sabino Vengco (“It is finished!”).

The people of Navotas always look forward to the Salubong of El Señor Resucitido (or Kristong Pagkabuhay) on Easter Sunday. The people, including young people, call Him “Ang Señor.” The procession bringing Ang Señor will come from the Sto. Niño Chapel passing by Daang Hari and Naval Streets toward the courtyard of San Jose de Navotas Church. It starts at 12 midnight on the eve of Easter, April 7, after Fr. Constantino Conti blesses the fire and water at 8 p.m.

El Señor, owned by the Pascual clan, and the Sorrowful Mother, owned by Virginia Roldan, will meet in front of the church in the ritual called Salubong.

More and more people, according to Tony Pascual, come every year to thank the Señor for favors answered or to ask for help for a certain problem. The Pascual clan of seven generations have been bringing the

Image for the Salubong, a tradition begun by their forebears.

The cousins Antonio Pascual and the brothers Carmelino “Jun” Alvendia and Amador “Sonny” Alvendia always went to the Salubong as teenagers. The image had been turned over to the brothers’ mother Esperanza Pascual Pahati Alvendia.

Tracing the family history from the time of Pedro Pasqual (note medieval spelling) is very interesting. It tells about a clan kept together by their devotion to the “Kristong Pagkabuhay.”

For many years the image of the “Kristong Pagkabuhay” was kept in a special room at the big house of Miguel Pascual and only brought out every Holy Week. Miguel was the grandson of Bernardo Pascual and Marcelina Sengson. When Miguel died in 1908, he left his properties and the image to his brother Don Faustino Pascual. When the latter died in 1916, image of Señor Resucitado was left to the care of his brother Jose Pascual who eventually left it to his sister Francisca Pascual Pahati (1870-1850), mother of Esperanza Pahati Alvendia. When lola Kika died in 1958, the image was given to her daughter Esperanza (1907-2001).

The image is under the care of her son Amador “Sonny” Alvendia, chair of Jade Vine Restaurant & Executive Inn and manager of the popular band Spirit of ’67. Helping him prepare the image for the Salubong are Zaldy Naval and his mother Aurora Naval.

Tony Pascual, the family historian and a retired banker, has a “miracle” to share. One Holy Week 20 years ago when the Señor was being kept at the house of Tony’s aunt Cora Pascual Sevilla, Tony asked someone to take his photo with the image. A week later when he finally had the pack of photos developed, he saw the Señor looking down at him.

This was strange because the image was sculpted to look up. Tony concluded that this was the way the Señor was guiding him to donate a Resurrected Christ to then Fr. Felix Pasquin, parish priest of of St. Jude Church in Bacolod at that time. Tony is part Ilonggo since his mother Lilia Kilayko married his father Jose Pascual Jr. who was assigned to Bacolod by the Philippine National Bank. Tony relates that his cousins include Miss Philippines Evangeline Pascual, model Annie Marcelo aka Annie Loise Pascual Cansanay, Sarah Jane Paez and Jose Paez. Central Bank governor Miguel Cuaderno and Pascual Laboratories founder Isosceles Pascual are relatives.

Be a blessing to others

Fr. Larry Tan, SDB, urged the Society of St. Expeditus during a recollection to ” be a blessing to others.” Deriving from a passage in James 2:26, he said “Prayer without good works is dead.” The passage explicitly says “faith without good works is dead.” It doesn’t matter how many Masses you attend, but if you don’t extend help to your impoverished brethren, what good is that? To make our Lent meaningful, let us follow this advice.

The feast of Blessed Pedro Calungsod on April 2 will be marked with a Mass at 7 p.m. in St. James Parish in Ayala Alabang. Archbishop Chito Tagle will give a Recollection at 8 p.m.

In Odiongan, Romblon the biniray or fluvial procession for St. Vincent Ferrer will be held on Easter Sunday, since the feast on April 5 falls on Holy Thursday. The Iglesia Independiente faithful, who also venerate the saint, will join the Catholics in the procession.

In the Most Holy Redeemer Church in Masambong, Quezon City, there will be a veneration of holy relics from 6 a.m.-7 p.m.