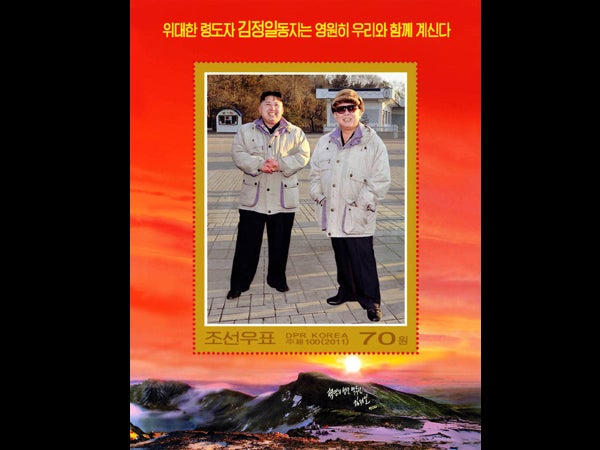 CELEBRATING THE FOUNDER’S BIRTH. North Korea will celebrate the centenary of its founding president, the late Kim Il-Sung, on April 15. He is the grandfather of the country’s present leader, Kim Jong Un. In this undated photo released by the Korean Central News Agency and distributed in Tokyo by the Korea News Service on Dec. 30, 2011, a commemorative postage stamp features the late North Korean leader Kim Jong Il and Kim Jong Un. The words on the top read "The great leader comrade Kim Jong Il will always be with us." AP Photo/Korean Central News Agency via Korea News Service

SEOUL—North Korea attempted on Sunday to lure foreign tourists to the hermit country to help celebrate a major anniversary, pledging to make “every possible sincere efforts” to show visitors a good time.

Preparations are under way at the scenic Mount Kumgang to arrange transport and lodging for foreigners who have apparently showed “keen interest” in visiting the communist nuclear-armed nation.

There are no official figures on how many foreign tourists visit North Korea each year, but their cash—the North charges exorbitant prices for everything from beer to accommodation—is a major boon to the moribund economy.

The resort at Mount Kumgang, where a South Korean tourist was shot dead by a soldier in July 2008 after allegedly straying from the area, was developed by the South Korean giant Hyundai Asan and opened in 1998.

It once earned the impoverished North tens of millions of dollars a year from South Koreans eager to see the other half of the Korean peninsula, but the tours have been banned since the fatal shooting of the South Korean housewife.

The development, which has since been deserted, “is fully open to all tourists in the blooming best tour season of April”, a spokesman for the tourism authority in the Mount Kumgang area told state media KCNA.

The spokesman pledged “all kinds of special privileges” to tour firms willing to go there, stressing the North was in celebratory mood for the centenary of the birth of its founding president, Kim Il-Sung, on April 15.

“We welcome all the tourists coming to Mount Kumgang and will make every possible sincere efforts to let them spend pleasant days in the best scenic spot,” said the spokesman.

The resort in the coastal Mount Kumgang was developed with South Korean money as a symbol of reconciliation between the two Koreas, who are still technically at war after the 1950-53 conflict ended only in an armistice.

But the 2008 shooting there and a general deterioration in ties has seen the North and South fail to agree to find a compromise on tour groups from South Korea returning.

Frustrated with the long stalemate and desperate for foreign cash, Pyongyang last year stripped Hyundai Asan of its exclusive right to run tours to the idyllic area that boasts breathtaking views, lush vegetation and waterfalls.

Foreign tourists face immense restrictions on visits to North Korea, which can ordinarily only be made as part of a closely watched tour group. Most areas of the country are off-limits and visitors are forbidden to talk to the locals.

Pyongyang on Sunday renewed criticism of what it called South Korea’s “grave provocation” over Mount Kumgang. Seoul has been lobbying for a blanket ban on all foreign tourists going there.

The North is set to lavishly commemorate the anniversary with various festivals and events including the launch of a satellite that has drawn widespread condemnation from the international community.

Pyongyang insists it is a peaceful space project but Washington and Seoul see it as a disguised missile test banned under UN resolutions.

The North, which desperately needs foreign aid to feed its 24 million people, slammed Saturday the US suspension of food aid over the disputed launch, calling the move an “overreaction”.

The communist regime under the late ruler Kim Jong-Il set 2012 as the year to become a “strong and prosperous nation”.