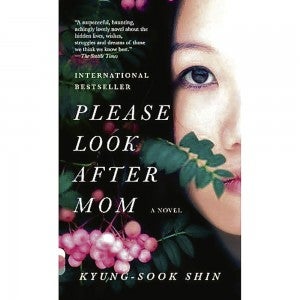 So much can come from a single, simple moment. One second, 69-year-old Park So-nyo is standing on a Seoul train station platform next to her husband, and the next second, she is gone.

Her disappearance ignites a wave of people searching for her. But as her family feverishly searches for her, they discover how much they didn’t know about So-nyo.

Though Shin has written seven best-selling novels in Korean, “Mom” is her first to be made available in English.

At the beginning, the long-suffering So-nyo seems to be someone left behind by the times, someone devoted to the old ways and simply carrying on as she is supposed to.

Hardworking but also stubborn, So-nyo is a woman of very few words. But it turns out she’s a woman with many secrets. The further you get into “Please,” the more secrets crop up, some of them downright stunning. She’s not the only one with revelations. Her disappearance reveals the buried dysfunction of So-nyo’s close family members.

“Please” is unusual in that it is written mostly in second person, with the novel’s perspective shifting from chapter to chapter, from the eldest daughter, the novelist Chi-hon, the eldest son Hyong-chol, the father and so on. The narrative is thoughtful and tortured, as everyone has their own regrets about how they dealt with So-nyo.

The remembrances follow: “I remember the day you asked me what my name was. You’re paved in my heart like an old road. Like the pebbles in a pebble field, dirt in dirt, dust in dust, cobwebs in cobwebs. I was young then. I don’t think I ever thought I was in my youth when I was living it, but when I think about when I first met you, I can see my youthful face.”

Hidden in the book’s corners are the many misunderstandings born of a life lived keeping it all in, such as the distrust between one generation and the next: “Our children won’t understand us. It would be easier for them to understand that hundreds of thousands of people died in the war than to understand you and me.”

It also becomes a brief study of the inherited dynamics of a traditional Korean family, particularly the treacherous bond between mother and firstborn son.

There is a stiff, formal quality to the prose that at the beginning feels like an impediment, but then you come to understand that it is characteristic of the old-fashioned speech.

Shin attaches to her characters’ inner monologues. “Please” has a lot of people wringing their memories like helpless hands until Shin turns the book on its head with a surprising twist—and readers will then be able to put together what really happened to So-nyo as well as what happens afterward.

Perhaps one of the unrelentingly sad books you’ll ever read, Kyung-Sook Shin’s “Please Look after Mom” is a study in somberness and a portrait of lost motherhood that repays your devotion with an unexpectedly deep release of repressed emotion at the end, feelings so strong you can almost hold the grief and regret in your hands after reading.