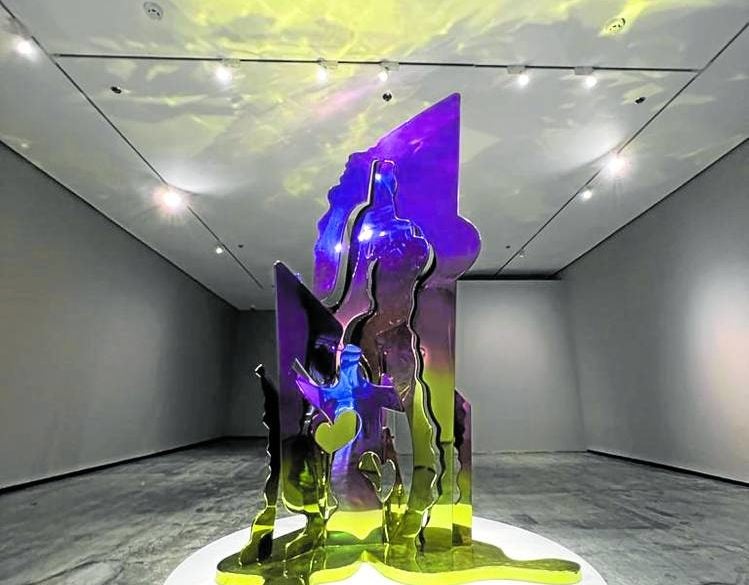 “Collective Bodies” by Juan Carlo Calma consists of eight curvilinear pieces painted from yellow to purple, suggestive of the galaxy.

Artists Juan Carlo Calma and his Brazilian sister-in-law Ciane Xavier think of themselves as provocateurs whose works compel the viewers to look closely and find some hidden meaning. While Calma’s sculptures and interactive works are characteristically playful yet profound, Xavier’s works can be unsettling yet impressive with the powerful integration of technology.

Their works were recently displayed at “Art Detour,” a group show of young and daring contemporary artists, at the Leon Gallery International.

Calma is a multihyphenated creative, although his day job is that of a design consultant in his namesake company. Every year, he pushes the envelope in creativity by coming out with abstract sculptures using various materials.

This time, stainless steel, often used as a building material for structure and reinforcement, became a medium for his latest work, “Collective Bodies.” Eight organically shaped steel pieces were interlinked to form a massive structure that was designed to anchor a public space. Amorphous forms spreading from two curved bases were an allusion to some kind of genesis.

Calma explored the reflective qualities of steel to cast images and shadows, depending on the direction of the light, and how their reflections shape the space. Not meant as a static object, the sculpture came to life based on the viewer’s experience while walking around it.

Steel was painted in gradations from gold to violet, suggestive of the colors of heavenly bodies. According to the artist’s notes, “Collective Bodies” is Calma’s imagery for how Earth travels around its axis and the transitions of day and night.

Calma said that as the world is emerging from COVID restrictions, he hopes to create happier works and immersive art spaces.

“My plan is to make bigger pieces for public spaces and institutions. Art can be celebrated around the cities to engage people and uplift their spirits. I want my sculpture to engage with the space. Wherever it is placed, it will cast different shadows and colors like a rainbow. It will give the kind of optimism after two years in limbo,” he said.

Self-taught sculptor Xavier integrates technology, whether virtual, interactive or augmented reality, to produce works that express her views of body image and search for spiritual identity. Her signature is defined by paintings and resin sculptures of naked women with distorted figures, masks and bunny ears.

The centerpiece of her new collection was “Open Mouth: New Vision,” a masked face of a woman with pink ears. Her gaped expression invited the viewer to look inside her mouth and watch obscure moving images. The mask symbolized loss of identity, while the bunny ears were a metaphor for falling down the rabbit hole—entering a surreal state. Xavier produced a computer-generated image rendered in video and shown on a tiny LED screen. “It’s like a vision of inner consciousness,” she said.

A resin sculpture of a nude woman with a droopy torso and big feet stood on a base, equipped with sensors. Titled “Sigh,” the work responded to sound as the base lit up and changed colors.

A provocative oil painting, “What Choices to Make,” portrayed a naked woman, whose body parts were exaggerated, contemplating on red and blue squares while her eyes were masked in green.