The ‘real’ runners turn up for this Cebu run | Inquirer Lifestyle ❮ ❯ 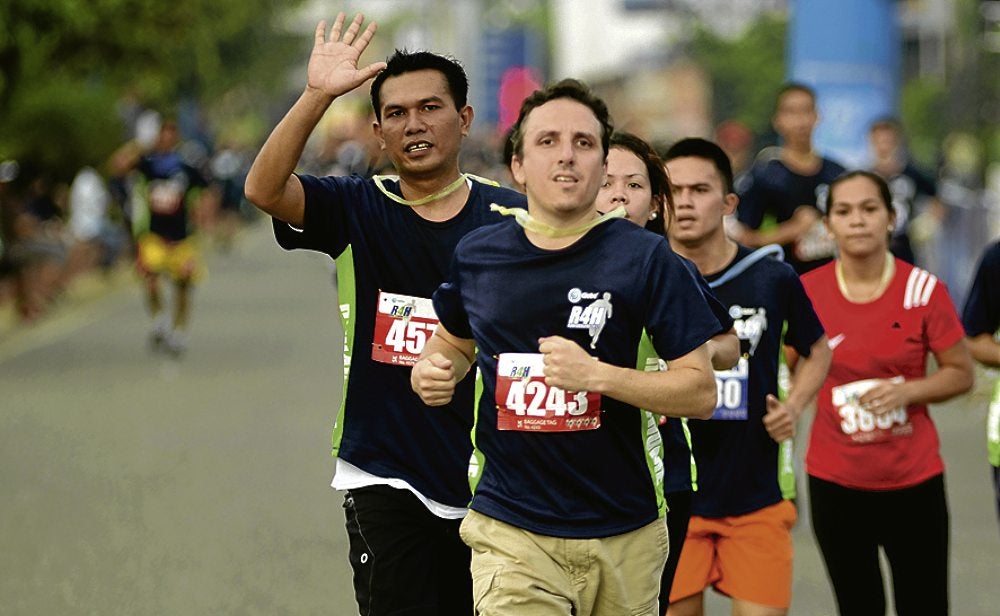 The ‘real’ runners turn up for this Cebu run

Thousands trooped to the Cebu International Convention Center to race and show support for the fourth Globe Run For Home (R4H).

The first Globe R4H outside Metro Manila, the Cebu turnout exceeded expectations as core runners from the city and beyond signed up and raced to the finish line.

More than 5,000 runners might seem like a low number compared to Manila’s huge turnouts that go up to five digits, but when Cebu said core runners, they really mean the people who live and breathe for running.

The route took them from the CICC to Cebu South Coastal Road toward the Cebu City-Talisay City boundary, to Plaza Independencia, Sergio Osmeña Boulevard and Ouano Avenue.

“The run was very good, with great weather. Route was very safe and flat. Although we competed a week earlier for another half-marathon in Cebu, Donna still managed a Philippine PR of 1:55 and placed 10th in the overall female. I had a modest time of 1:45 and placed 22nd overall male category,” said Larrazabal. This is their first Globe R4H race.

Amale said it is “a privilege to live in Cebu,” turning down several chances to move to Manila. A lover of the great outdoors, she said she and her husband run in the trails of Cebu where the air is cleaner and fresher.

“Sport is a good platform to support many causes,” Noy said. For Globe R4H, he and his wife, by simply joining, supported four beneficiaries: Habitat for Humanity Phils., Gawad Kalinga, Cebu Biodiversity Foundation (CBF) and the Philippine Tarsier Foundation (PTF).

Habit for Humanity Phils. and Gawad Kalinga are raising funds for their housing developments for Typhoon “Sendong” victims in Iligan and Cagayan de Oro City. PTF  is spearheading a massive campaign to save the Philippine tarsier and its natural habitat; CBF is transforming communities in key biodiversity areas into effective stewards of the environment.

Dropping from 309 lbs to 184, “Biggest Loser Pinoy Edition” second-placer Choachuy finished the 21K in 2:41, several minutes over his PR of 2:23. The 41-year-old architect, a self-confessed former stress eater, now exercises to beat stress. He is currently organizing a fitness camp this summer with coach Jim Saret in Cebu, and training for his first Ironman 70.3 next year.

The youngest runner, 4-year-old Raphael Andrew Siase, joined the 3K race, finishing in 43:06. Not the best time for this young boy, who once finished fourth in the same category, because he ended up chatting with a friend he bumped into along the way.

“This run is for our subscribers. Eighty percent of the people who join every Globe R4H are our subscribers; 20 percent are their families,” said Yoly Crisanto, Globe Corporate Communications division head. Her son, Ramon, raced in the 3K category.

For next year’s Globe R4H, Crisanto said they are considering organizing the race in Subic.

Globe R4H boasts of pioneering running innovations in the country. Crisanto said it is the first race to introduce and use the running chip, the first to hit the trails and the first to incorporate the Facebook component that automatically updates a runner’s status in real time after crossing the finish line.

“Now that was fun,” said Globe senior advisor for Consumer Business Peter Bithos, who joined the 5K leg. Bithos, who swims three times a week to stay fit, ran his first 5K race: “The vibe and the atmosphere were energizing.”