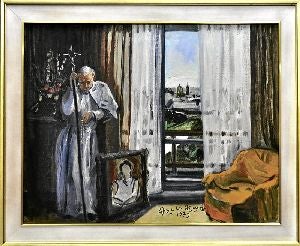 John Paul the Great, according to Federico Aguilar Alcuaz

IN “PARALLEL Texts,” the 2005 art book in which journal entries of Federico Aguilar y Alcuaz are excerpted, the late National Artist-elect writes about Paloma, a “bluish-black dove” that wandered into his Manila Pavilion suite-studio in 1983. Alighting at the window, the bird seemed to be inspecting the atelier and its stack after stack of paintings. 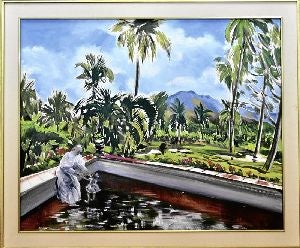 “It reminded me of the Pope’s visit and how a white dove came to my window,” the artist writes in his journals, referring to the tumultuous visit of Pope John Paul II in Manila two years before. “I thought of the Holy Spirit and prayed (in 1981)… and I did a painting—ushering a series about the Pope.”

The series consists of eight oil-on-canvas paintings. Three of them now belong to the Eddie and Norma Chua Collection, and the rest are missing, according to the family of the artist, who died last Feb. 2.

(Missing is an uneasy term. To be sure, the missing paintings are now in private collections. How they got there is the subject of intense speculation since, for all intents and purposes, the late artist, who was notorious for refusing to part with his paintings, could not have willingly sold them outright. It is widely believed he could have unwittingly given them up (or “sold” them), after a 2003 accident in which he suffered chronic subdural hematoma that severely weakened not only his constitution but also his mental reflexes and judgment.) 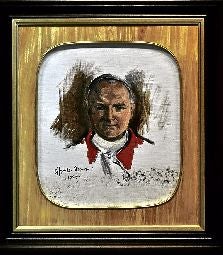 Aguilar’s series especially comes to mind as the world is still euphoric over the beatification yesterday of the late Pope by his successor Pope Benedict XVI.

This author remembers seeing a beautiful painting by Aguilar in 1995, around the time of the second papal visit of John Paul II on the occasion of World Youth Day. It showed the Pope on a moored boat and a multitude of turtles converging at his feet, as if paying him homage, and him in the act of blessing them. The painting is not part of the Chua collection.

Businessman Eddie Chua, who started collecting Aguilar works in 1994 and became a close friend of the artist, let the Inquirer in to his collection of the papal series, all of them untitled (the artist typically left most of his paintings without titles).
The largest painting shows the Pope in a pose very familiar to Catholics and the rest of the world: both hands clutching at the Giacometti-like crucifix that doubles as his bishop’s staff, his head bent in an attitude of intense contemplation or perhaps prayer. 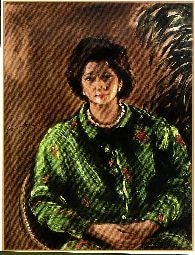 Dressed in white papal regalia, the slightly hunched figure is powerfully set off by the near-absence of background, as if he were about to come out of the canvas. But there’s a fleeting background—a bare horizon of green and a sliver of sky—that all in all evokes the universality of the papal figure.

A very striking painting is of the Pope right in Aguilar’s suite at the Pavilion (originally Manila Hilton). John Paul II is shown standing, his right hand holding the crucifix-cum-bishop’s staff, his left elbow resting on what appears to be a large canvas by the artist; at his foot is another painting. In his left hand, the Pope fingers the rosary.

At the Pope’s left is the window showing the familiar aerial view of Rizal Park outside. At extreme left is a yellow sofa, golden in its glint, conjuring the celebratory color of Easter.

The conceit here is not alone the Pope finding respite from his busy schedule and pressing concerns in the artist’s studio; it is also in the way he seems to find support from the frame on which he leans. 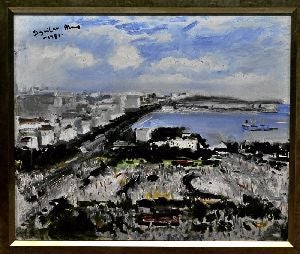 Art propping up the Pope, giving him solace and providing him renewed strength? It’s a hyperbole not exactly unlikely, since John Paul II was, as Karol Wojtyla, a performing artist, dramatist and poet, an artist and a champion of the arts.

In 1995 in fact, he beatified the early-Renaissance Dominican Fra Angelico. (Of course, the friar artist has been called since his death by the Italians as “Beato Angelico.” Someone who would call him a mere friar or brother before the Italians would risk a lynching.) Beato (or Blessed) Angelico is now patron saint of artists.

In early 1981, when the Philippines was anticipating John Paul’s first visit, Aguilar, according to Chua, got a “yellow invitation” to the beatification ceremonies of Lorenzo Ruiz and Companion Martyrs. It would be the first beatification outside of Rome, and Aguilar was understandably excited.

Perhaps to memorialize the invitation and the occasion, he put the invitation card near the window of his suite, planning to paint it with the window view of Rizal Park, where the beatification would take place. 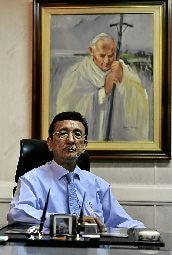 He apparently had planned to do it in the morning and went to sleep. When he got up the next morning, he found a white dove (the same dove he refers to in his 1983 journal entries) on the window sill. It had wandered into his suite surveying its horde of works painted across the years by the occupant known for his prodigiousness.

A devout Catholic, Aguilar took the white dove for the Holy Spirit and proceeded to paint the papal series, Chua said.

Aguilar also did paintings to memorialize the beatification. One of them may be seen by the public at the Rotisserie of the Manila Pavilion.

At nearly four meters long, it is one of the biggest paintings by the artist. It’s a striking nocturnal depiction of the beatification, with the silhouette of the cross and beatification tableau (designed by Francisco Mañosa) limned by reverential light amid the sea of people and candles.

In Chua’s collection, in fact, is another landscape depiction of the beatification, but set in the late afternoon, with a view of Roxas Boulevard and Manila Bay, apparently painted from the top of the Manila Hotel, the alternative vantage point (other than the Hilton’s) taken by the artist. It’s a blithe and lighthearted landscape; it uplifts the spirit.

The beatification landscape is not part of the papal series. The third and last painting of the series that belongs to Chua’s is perhaps the most enigmatic.

Combining both life painting and landscape, it shows the Pope sitting on a ledge or extended concrete bench, hunched over a little girl; they’re holding hands and he’s apparently playing with her and she’s going along with him, perhaps asking him for a swing. Behind them is a bucolic scene of coconut palms, mountain and sky. It’s an Edenic scene that seems to have been transposed to the tropics.

Chua said the landscape was Laguna’s. He explained the artist had told him the painting was, like his paintings of the Pope in his suite, a beautiful fiction: It imagines the Pope in the pastoral surroundings of Laguna and its famous baths (the painting shows the Pope’s feet upon a glassy, seemingly wet floor), with mystical Mount Makiling hovering in the background.

The ledge or bench seems to situate the Pope in a park or, perhaps, one of the hot-spring resorts for which Laguna is famous. One remembers here the late critic Rod. Paras-Perez’s comment that, for all of Aguilar’s training in pure landscape rendition under Torribio Herrera at University of the Philippines, Aguilar was “the epic troubadour of the urban landscape.”

“Even when Alcuaz is confronted by a completely rural scene, like a view of Tagaytay, he would aptly present a wide-angle view,” Perez said, “thus imparting the sense of grandeur evoked by the place, the beauty of life defining every form; but also concrete balcony railings assertive of man’s presence.”

But the papal series was not the first paintings Aguilar had done of John Paul II. He had apparently been doing quick portraits of the Pope as early as 1979, Chua said.

In the collection are four of such portraits. Chua said Aguilar had told him they were swift renditions of the Pope in various attitudes which he did while watching regular television broadcast of the Pope’s activities in Rome.

Chua said Aguilar would often leave his TV on for hours and hours. Since the highly cosmopolitan Aguilar had studios in Spain, Paris and the US, it was apparently his way of catching up with news and developments around the world.

Chua said he found the small papal portraits under the sofa in Aguilar’s suite. It took some convincing and cajoling before Aguilar agreed to sell them.

Chua said his collection largely owed to his late wife, Norma. She had, in fact, spotted the papal series at Marbella, where Aguilar also kept his stacks of paintings.

Chua, who’s Buddhist, said Norma was a devout Catholic with a good eye for art. When she stumbled upon the papal series, her religious devotion and aesthetic taste were pricked. She set out to convince Aguilar to sell her the series.

Apparently Aguilar, who was fond of Norma, warmed to the idea. But the dynamics between the artist and the Chuas was that, although he would agree to selling this or that work, it would take some time for it to be delivered and the transaction finished. Chua explained the artist was nearly always reluctant to part with his works on the market.

So the parts of the series were only acquired over long stretches of time. The Chuas were able to acquire three of the big canvases.

Norma died in 2002 and Aguilar had his accident the following year. It was then that five of the paintings in the series went missing.

Apparently, because of the accident, Aguilar, who was living alone, suffered from memory lapses and other neurological problems that made him prey to opportunists who would reportedly knock at his suite and leave with his works.

When Christian Aguilar, the artist’s son, came to Manila from Germany in 2005 to take care of his father, he found many paintings gone. He has since established and conserved the artist’s inventory. He’s now manager and custodian of the artist’s estate.

Chua is happy he and his wife were able to strike a friendship with Aguilar despite his eccentricity. He’s happy, too, that part of the papal series is now in his collection.

He said he and his wife had attended a Sunday Mass by the Pope in 2000, in which he experienced first-hand the aura of sanctity that reportedly always surrounded the pontiff.

“It was obvious that Pope John Paul II was a very holy man,” Chua said.” He deserves to be beatified.”

But nothing beats the alleged papal experience of Aguilar, whom Chua called “very naughty.”

“‘The Pope visited me,’ he would claim,” the businessman said. “He would say the Pope was right there in his hotel suite.”

And judging by his papal series, Federico Aguilar y Alcuaz was telling the truth.