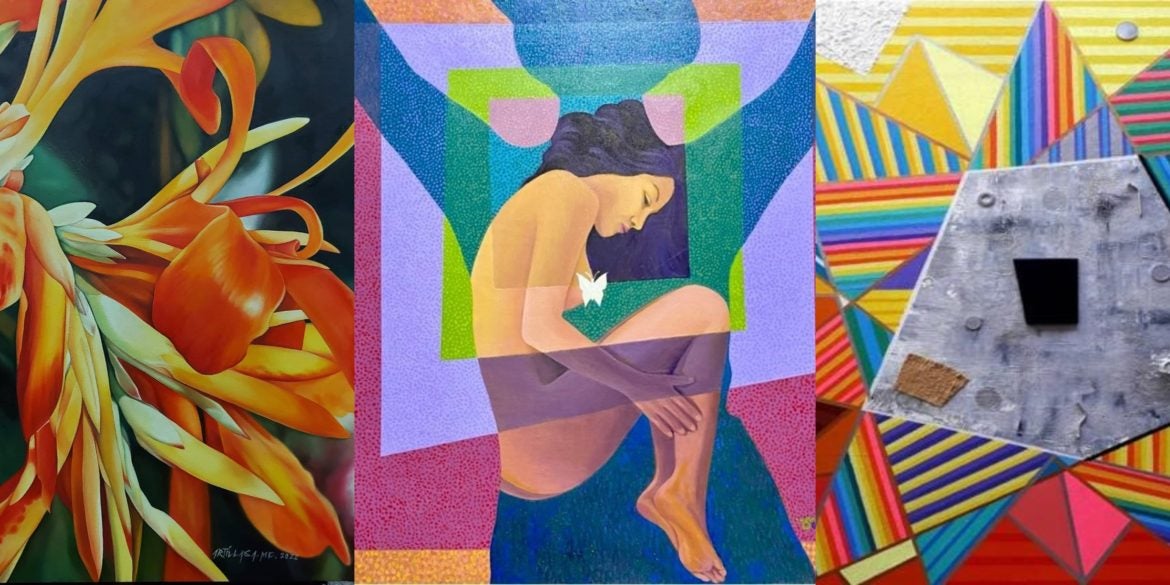 What is it about Angono with its wellspring of artistry? Something about the area which inspires people from all ages and backgrounds to pick up the brush or the chisel and interpret or, more accurately, capture the astounding breadth of beauty around them.

Many years ago, Carlos “Botong” Francisco, the “muralist with a golden brush,” dreamed of putting up an art organization to solidify Angono’s reputation as the “Art Capital of the Philippines.” Botong never got around to doing so. In 1975, to commemorate Botong’s sixth death anniversary, artists from Angono banded together to pay tribute to the master. That was the start of the Angono Ateliers Association (AAA) Philippines and, from then on, the artist-members have mounted shows to share their visions and meditations on canvas.

Fourteen artists from the Angono Ateliers Association Philippines are featured in a show on view until Sept. 15 at Robinsons Land ARTablado in Robinsons Place Antipolo.

Nemesio “Nemiranda” Miranda Jr.  who is known as the forerunner of the art form dubbed as Imaginative Figurism will make his debut exhibit in ArtAblado. Most of his artworks depict Angono’s mystic legends and local folklores: “Ang Nuno,” “The Mermaid of Angono,” “Maria Makiling,” and “Bernardo Carpio,” among others.

Arnold “Atoy” Apostadero, the current president of AAA,  will showcase his artistry by depicting daily folklife, culture and traditions, as well as nature in magnificent colors.

Rodolfo “Dolpee” Alcantara Jr.  known for his style of Stylized Pointillism remains inspired by his  relationship with  colors and the emotions they represent.

Aries Hernandez specializes in murals and sculptures that can be seen in colleges and restaurants in Parañaque, Laguna, QC and his hometown of Angono.

Rading Caringal’s artistry shows in his usage of fine, soft, and cool color tones, focusing on subjects pertaining to the Filipino family.

Rosalie Vitor Gonzales, a multi-media artist, prefers the use of  graphite and acrylic, specializing in portraits and nature.

Sarah Pallarca gets her inspiration from the French Impressionists. She is currently exploring abstracts by way of impressionist techniques.

Adonis Carado worked in Dubai until 2018, making use of his skills in styro carving, glass resin and rubber molds.

Bernardo “Bernie” Balagtas won in a number of national art competitions and had a solo exhibition in 2016 titled “Displacement.”

For Cecille Artillaga, clarity, vibrancy and attention to details are essentials in art-making. She is an artist and educator.

Jeremias “Jeff” Ramos Gamulo is a bonsai enthusiast and an artist. He is the club adviser of the Angono Bonsai Club from 2020 up to the present.

According to Juno Galang, “My art is a balance between the beauty of human existence and the style of abstraction, cubism and distorted impression.” His choice of colors lean predominantly toward warm and vibrant hues of purple, green, yellow, red and blue.

Augusto Santiago considers himself as a figurative artist and his work as Modern Impressionism.

ARTablado, a portmanteau of “art” and “entablado” is Robinsons Land’s very own stage in showcasing Filipino ingenuity and creativity.  Through the support of RLC, this platform  continues to thrive by allowing  both emerging artists as well as respected masters  to freely express themselves through art and paves the way to greater recognition of their talent and hard work.