The return of the triathlete | Inquirer Lifestyle ❮ ❯ 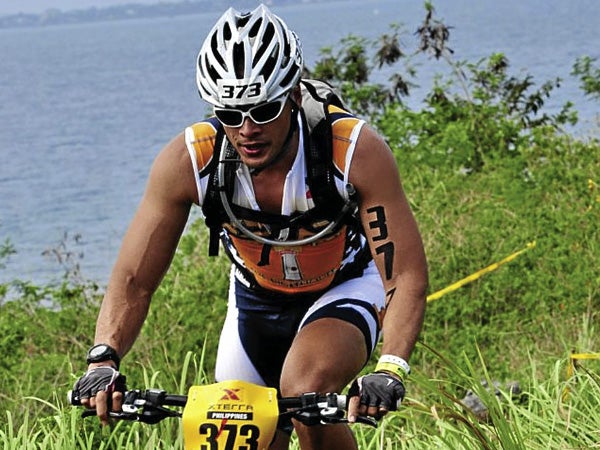 The return of the triathlete

TV anchor Paolo Abrera attacked the hillside legs of the Vaseline Men Xterra Offroad Triathlon Series in the scenic coastal municipality of Liloan, Cebu. The 41-year-old triathlete finished sixth in his age group with a record of 4:07.

While some triathletes set their sights on the Olympic standard—under three hours— Abrera was content to just get enthusiastic about the sport again. He was engaged in it for nearly two decades, but the same activities can get a little stagnant over time.

“There were years when I lost interest and didn’t participate. A few years later, I got motivated, I went through cycles. Two years ago, some friends wanted to get started. It sparked my interest in training and participating in the events again. You have to find something fresh to keep you interested,” he said.

Many triathletes go on because they are eager to test the limits of their endurance and hope to master running, cycling and swimming in their lifetime. Abrera enjoys simply working hard at three sports which provide diversity and balance to his life.

The recent Vaseline Men Xterra Offroad Triathlon Series in a resort town was—figuratively and literally—a breath of fresh air for him. “An offroad triathlon is a new thing here. Normally, triathlons are on the road. The bike and running courses were on mountain trails so it was more challenging for people accustomed to road triathlons,” he said. He added that the offroad series raised the bar for triathlons in the country.

Abrera found the mountain bike trial difficult because of the uneven terrain. “You need to expend more energy to control the bike,” he said.

Getting rid of baby fat

Abrera first became interested in endurance sports at the age of 14. Wanting to get rid of his baby fat, he took up cycling. “Aside from addressing my weight problem, it gave me a sense of adventure. I discovered many places even if I couldn’t drive yet,” he said. He joined small groups that took biking trips to Antipolo and Tagaytay. 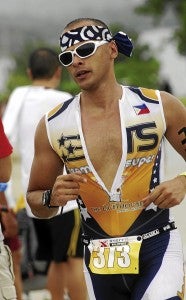 In the early ’90s, he featured triathletes in the now defunct sports show “Game Plan.” Intrigued by their intense drive to excel in three sports, Abrera made his foray.

“It was daunting when I started. I didn’t have much of a swim. I had to clean up my strokes and get comfortable in water,” he recalled.

“Triathlon was in its infancy in the Philippines then. People were discovering the best ways to train, the best nutrition plan. You worked out as much and as often as you could. Everybody was caught up with carbo loading. My idea was eating platefuls of pasta before a race. It never worked,” he said.

Today, the training is more scientific, as non-pros and elite athletes are engaging in sports periodization, or changing the training program at regular periods to keep the body working harder, while still giving it enough rest. “Recovery is an important part of the training process,” Abrera added.

While competing, he pops a couple of energy gels and eschews the power bars, which he finds difficult to digest. “If you eat well leading up to the race, you don’t need much energy pick-ups,” he said.

The injuries—low back pain, patellar tendonitis (jumper’s knee), inflamed tissues under the foot, sprains, bumps and bruises—were his mementos of the events.

His body musculature can trip him up in other sports. Since cycling is his forte, he developed large quadriceps muscles, which a runner doesn’t need because it adds extra muscle weight in the legs. A cyclist’s torso is light and compact, while a swimmer needs large back muscles and shoulders. Hence, Abrera spends more time training for both.

He trains for 12-14 weeks before a triathlon. Waking up at 5:30 a.m., he does strength training—a combination of traditional weight resistance, TRX suspension workout and plyometrics, a program which involves explosive moments and muscle elasticity.

Trying to be efficient with his time, he runs for five kilometers thrice a week and 10 km on weekends (“It’s not long compared with others,” he said.) Sometimes he joins his teammates or triathlete friends on cycling rides out of town. Abrera also bikes from his house in Parañaque to ABS-CBN in Quezon City.

“Triathlon is about dedicating the time to meet the minimum requirements. You’ve got to be religious with your mileage and intervals.” His best record is an Olympic distance of 2:40 in a triathlon held in Subic.

“That was a few years ago when I had youth on my side. I was motivated and I focused my time on training,” he said.

However, maturity has its benefits. “Your recovery time and anaerobic threshold are higher when you’re younger. But as you mature, you can be more disciplined in racing and training. You have increased mental stamina, a better grip and more experience to draw from,” he said.

He pointed out that while the younger one has explosive power, a mature athlete builds more slow-twitch muscle fibers which are good for endurance activities like long-distance running or cycling.

Abrera adds that he’s got a better sense of pacing. “I know my body’s limit. I don’t bonk—-push too hard that you run out of speed in the middle of the race and end up fatigued. I know how to spread out my strength and endurance. There’s no need to prove anything to myself, so I just enjoy the challenge of the race.”