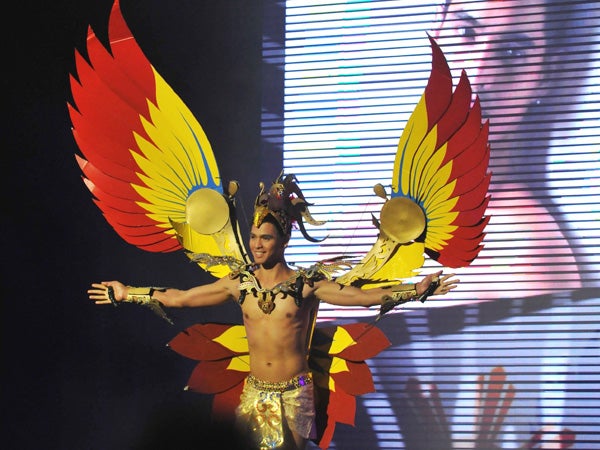 Carlito Rosadino, Jr. of the Philippines performs at the Grand Finale of Mr Gay World 2012 in Johannesburg on April 8. This year a towering German who lives in New Zealand, Andreas Derleth, took the title late. He beat out 21 other men, including the first black African contestants, whose participation brought its own difficulties. AFP

JOHANNESBURG—One came from the Philippines with mechanical wings, another from Mexico in a rhinestoned Mayan headdress, and one from Finland simply wrapped in a sauna towel.

But for the first time, the contestants in Mr Gay World came to Africa, a continent where most countries still maintain sodomy laws, sometimes punishable by death.

Only its fourth edition, South Africans have won twice — both times by white men.

This year a towering German who lives in New Zealand, Andreas Derleth, took the title late Sunday. He beat out 21 other men, including the first black African contestants, whose participation brought its own difficulties.

Taurai Zhanje, the contestant from Zimbabwe where President Robert Mugabe regularly brands gays as “worse than pigs and dogs”, pulled out after government agents intimidated his family.

“There was relentless pressure on the delegate from Zimbabwe to withdraw,” said Coenie Kukkuk, the contest’s Africa director.

“His family was followed by agents of the regime in Zimbabwe. His mother is employed by the government, she surely would have lost her job. And with 80 percent unemployment, she was looking after a lot of people,” he said.

The Ethiopian delegate, Robel Hailu, is a student in South Africa but was disinherited after a radio statio in Addis Ababa announced his title.

The contrast between the rest of the continent and South Africa couldn’t be greater. Gay rights are enshrined in the constitution, and gays can legally marry and adopt.

This year’s contestant, Lance Weyer, is an elected local councillor for the opposition Democratic Alliance in the coastal city of East London.

He praised South Africa for supporting gay rights in forums like the UN Human Rights Council, even in the face of opposition from many other African countries.

“We need to be working with those governments to educate them,” he said from the stage. “You can’t just decide that you’re going to support certain rights and not others.”

Many black gay South Africans still suffer discrimination and attacks. Lesbians in particular are the target of “corrective rapes” — in which their attackers claim the rape will “cure” their homosexuality.

In some African countries, like Botswana and Malawi, younger gays are grouping together aided by the spread of cell phones and the Internet. They’re beginning to form new organizations or work with other rights groups to push for change.

And it’s not just Africans who face challenges.

In Bulgaria, former Olympian Chavdar Arsov lost his job as the luge coach for the national team after he participated in the contest.

China has banned the competition and officially reprimanded the country’s only-ever contestant, Xiao Dai, who defied a ban by Beijing to participate in the 2010 contest in Oslo.

Most of the contestants came from Europe and the Americas, with none from the Muslim world and few from Africa and Asia.

And while the competition features extravagant costumes and skimpy swimwear, Kukkuk said such contests can be a force for change.

“It’s the search for a global (gay) ambassador who can represent human rights,” he said.

“Beautiful men yes, but beautiful with a purpose.”

In Ethiopia, Kukkuk said, “there was never a talk or discussion or debate about (gay) issues before. Now there is.”

In Namibia, Wendelinus Hamutenya drew global attention when he was beaten and hospitalized two weeks after winning his title.

He’s not sure the attack was a hate crime, and he says that since winning his title, he’s started a support group for gay Namibians on Facebook that has attracted more than 900 members.

Namibia’s government has also approached him to work on the nation’s first survey of men who have sex with men.

“It was a breakthrough,” he said.