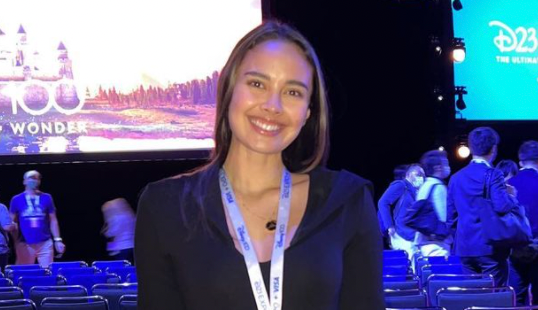 Former Miss World Megan Young greatly enjoyed her recent Disney expo experience which afforded her the chance to have a peek into forthcoming Disney movies.

Young expressed her excitement as can be seen in her Instagram page yesterday, Sept. 11, sharing photos of herself while inside a cinema.

“Too many titles to mention for D2 of D23, everyone was HYPED for Wakanda Forever – I mean… those scenes that were shown to us. Buti nalang malapit na [yung] showing date at hindi na natin kailangan mag antay ng matagal – November 9 na. (It’s good that the playdate is near and we don’t need to wait further – it’s on  November 9 already),” she noted. “They also saved the best presentation for last.”

Young also marveled at the scenes from James Cameron’s “Avatar: The Way ff Water” in 3D, saying she felt as if she were swimming due to the beautiful visual effects.

“I’m still on a high from this quick trip to LA. I’m kilig  (giddy) from all the exclusive clips we got to watch and kilig (giddy) because there were so many surprise celebrity guests too! Till the next D23,” she said.

With her favorite Disney movie being “Little Mermaid,” Young is also very excited for “Strange World.” And while attendees were not allowed to take photos and videos of certain presentations, she is still grateful to keep the memories and comforted by the fact that most of the films teased will be released by 2023. JB

WATCH: Megan Young pampers self after failing to get BTS concert ticket