An oasis in Lucban hidden amid the forests | Lifestyle.INQ ❮ ❯ 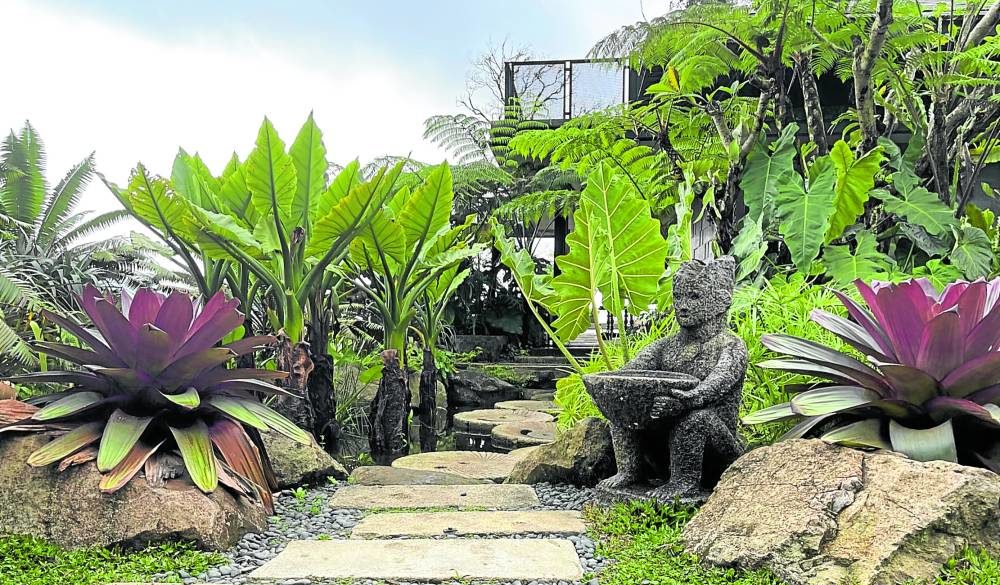 A stone “bulul” (rice granary god) greets the visitors amid the bromeliads.

An oasis in Lucban hidden amid the forests

Amid the forests and coconut plantations in Lucban, Quezon, lies the oasis of landscape artist and horticulturist Roberto “Bobby” Gopiao. Of the 30-hectare site, five hectares have been developed into his private nurseries and weekend getaway.

Pathways made of piedra china, antique railroad tracks and concrete follow the sloping terrain and lead the visitors through a sequence of gardens and covered greenhouses. The straightforward grouping of the tropical foliage is a response to the microclimate and the abundance of water in the property, he explains. Their vistas are oriented to the Philippine Sea and Mount Banahaw.

The facilities are basic—the temporary office made from a ship container and a thatched gazebo for visitors. A work-in-progress, a modern Japanese-inspired house, designed by architect Jason Buensalido, is a kilometer away from the greenhouses, but it’s still inside the property, adds Gopiao.

“We added more than 500 tree ferns because I wanted to emphasize them and make the place cooler. They lend a sense of place,” he says. This refreshing arrangement captures more carbon dioxide and facilitates water preservation and oxygen production, thus simulating a tropical forest effect.

“I don’t want the ferns wasted. They should have their own sanctuary. In the future, I will put up a fernery and an orchidarium,” he says.

The overflow of water from five waterfalls and three springs provides more ponds amid the plantings.

While most people escape to Tagaytay and Batangas, Lucban has been under the radar, observes Gopiao. The cool weather and long rainy months are conducive to the growth of giant ferns, tree ferns, flowering calatheas, ginger plants, aroids, philodendrons, anthuriums and bromeliads. Endemic orchids have been introduced such as butterfly orchids.

Gopiao describes his style as a spontaneous assemblage of plants in their habitat—a contrast to the well-defined and symmetrical style of formal gardens. He is attracted to leaves with strong forms such as the wide leaf blades of the Chinese evergreen (aglaonemas), the club shapes of the anthuriums, the pendant greens of the pallidiflorum, and the round, waxiness of the pig skin philodendron.

Wood cycads, pitogo plants, tree ferns and yellow corn plants serve as canopies that shelter understory plants such as bromeliads, philodendrons while mini costuses and creeping selaginellas serve as ground cover. Selaginellas gathered from the wild and replanted on site as a reference to Lucban, he says.

Gopiao’s career in landscaping began in the 1970s when his uncle, Rebecco Panlilio, was building the Puerto Azul Golf and Country Club. Hospitalized due to an accident, Panlilio asked his sister, Gopiao’s horticulturist mother, Corazon, to supervise the landscaping.

A plant enthusiast in his youth, Gopiao would escort his mother to projects. One of the architects from the design firm, Mañosa & Company, gave him tips on landscape design such as composition and layout.

With more than three decades in landscape design and horticulture, Gopiao has been working residential and commercial projects such as Manila Memorial Park in Dasmariñas, Cavite and the developments of Crown Asia. Sen. Imee Marcos, former President Joseph Estrada and former first lady Amelita Ramos have been his clients. He designed the private garden of Thailand Prime Minister Thaksin Shinawatra during his term in the early aughts.

“When I do private gardens, I look at viewpoints. I look at the floor plans and see how to best situate the garden from the window of the dining room or the master bedroom that overlooks the garden.”

Likewise, he is a resource person for bonsais, having been trained in Japan and Taiwan. In 2001, he won the grand prize in the World Bonsai Convention in Japan, for his century-old bantigue.

On the secret of his success, Gopiao says, “I don’t repeat designs. I’m not like some landscape consultants who have a recognizable formula.” —CONTRIBUTED