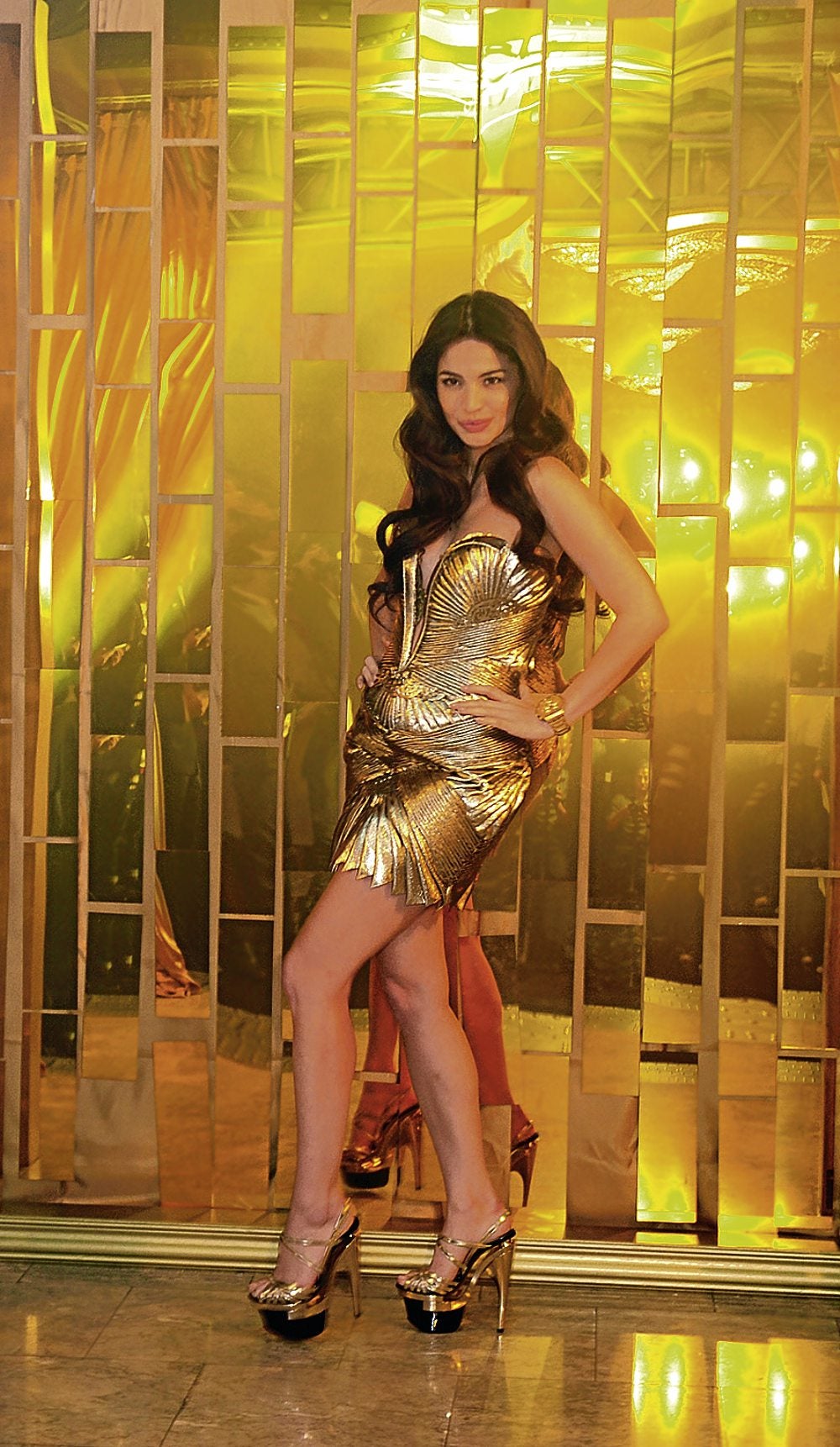 Incredible Virgie Ramos of Swatch Philippines hosted an awesome bash at the chi-chi Salon de Ning, Peninsula Manila. The eye-catching rooms around the Salon were transformed into a Swatch-inspired look, showcasing the gorgeous collections of Swatch and allied brands. After all, dahlings, the Swatch Group includes Breguet, Blancpain and Omega, no less.

Everyone gave a collective gasp as Anne Curtis stepped out of the gold room. Wearing a perfectly crafted gold dress, Anne gamely posed as she showed off Swatch’s newest—

the Chrono Golden Block watch. It’s my super favorite, must-have watch from the collection, with its huge stainless steel watch, a golden case, bracelet and dial. Anne was absolutely divine as she blew kisses and strutted her stuff to everyone’s screams and applause.

The Fafi room had Alodia Gosiengfiao wearing the Swatch Fafi O’Clock watch. “It has a modern finish of sleek black plastic with the colors and deft curves of the French graffiti artist’s signature style of mark-making,” explained Virgie Ramos. The room had a black wall where Ayala’s pillar of strength, Jaime Zobel de Ayala, and his gorgeous granddaughters Natasha, Henny, Sylvia, Cristina and Beatriz, busily created colorful doodles.

Moi then asked Don Jaime his favorite room. Faster than you could bat an eyelash, he said: “The black-and-white Swatch x Petrantoni room. It was inspired by words and images from 800 dictionaries; it had this incredible word puzzle challenge, keeping all of us busy,” he explained.

Luis Manzano proudly announced that a watch from this collection includes his name— “Lucky Draw.”

The Dragon Room was inspired by the watch I was wearing that night—the Swatch Year of the Lucky Blue Dragon. It had somebody doing Chinese calligraphy and someone reading fortunes.  Anne Curtis couldn’t resist having her fortune read. She was told: “You will go to more beautiful places. This is about emotional maturity. About progress, there’s no way to go but up!”

Phenomenal jazz singer Zia Quizon, Christian Bautista (who came with his Romanian-Chinese girlfriend Carla Dunareanu), and Jay-R all wore the Swatch x Petrantoni. It’s a stark palette of black and white that has the Italian graphic artist Lorenzo Petrantoni’s illustrative patterns and motifs printed on the sleek silicone and plastic surface.

Chris Tiu surprised us with his catwalk, wearing the Swatch New Gent White Lacquered watch; he wore fierce dragon tattoos and an edgy hairstyle. He was surrounded by models with lighted paper skirts and hats with the new colors of the Swatch Lady Double Tour watches. The strap in this collection can be wrapped twice around the wrist to create a truly striking style statement.

Afterwards, the best-dressed person of the evening was announced, and it went to ultra-glamorous Ching Cruz who was in a slinky black strapless pencil-cut  gown by Natori, naturellement. Also declared well-dressed were Henny Zobel and Linda Ley.

One thing is for sure, there is never a dull moment in a Swatch happening, with Swatch goodies for everyone. Now, that is the Virgie Ramos way of entertaining, the awesome Swatch way, palanggas!

Young entrepreneur Nicole Lobregat Ortega celebrated her 40th birthday with her close pals and relatives at the Manila Polo Club recently. It was a trés significant affair, with  champagne, Proseccos and Pinotage overflowing, complemented by the excellent menu whipped up by Vanna Calalang: yummy black squid ink pasta, mouth-watering white fish, and the to-die-for brick oven-baked chicken. Assorted flavorful pizzas kept rolling to our tables, straight from the oven, dahlings.

Apart from desserts galore, Baba Ibazeta’s gorgeous apple walnut cake and chocolate cupcakes were there for everyone to dig in. The in-demand  Rock-I-Oke band played. Jamming with them were handsome Johnny Velasquez and the celebrator’s “Angels,” as she called them, including Alice Eduardo, CEO of the Sta. Elena Construction & Development Corp., and Alan German. Also joining in the fun were Paul Smith’s Juan Miguel Ongsiako, and Ayen and Franco Laurel.

Nicole’s handsome husband, my palangga Mannix Ortega, gave a heartwarming speech and surprised her with a vacation package as a birthday gift, to the scream of delight from his wife, and wild applause from the invitees.  Après shaking the floor, we all went home with one big question: “Hey, when’s the next party, dahlings?”