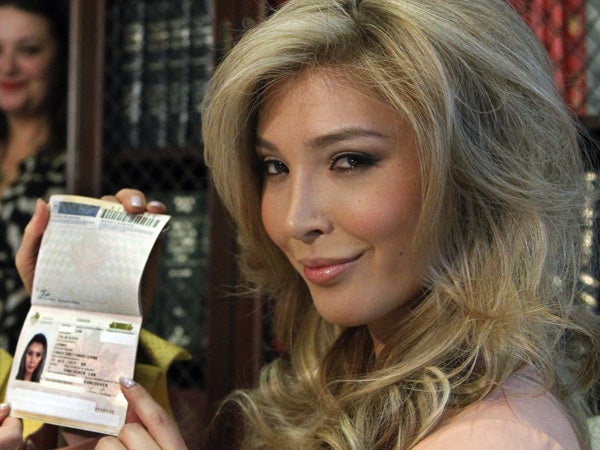 NEW YORK—Donald Trump’s Miss Universe contest on Tuesday threw open its doors to transgender models, allowing men who have had a sex change the chance to be crowned the world’s most beautiful woman.

The transgender contestants will be able to strut their stuff in the international beauty championships starting in 2013, while pioneering sex-change model Jenna Talackova will be allowed to take part this year, said gay and transgender rights organization GLAAD.

“The Miss Universe Organization today follows institutions that have taken a stand against discrimination of transgender women including the Olympics,” said Herndon Graddick, a spokesman for the Gay and Lesbian Alliance Against Defamation.

Paula Shugart, president of the Miss Universe Organization, said on GLAAD’s website: “We have a long history of supporting equality for all women, and this was something we took very seriously.”

The reversal of longstanding policy followed a campaign by Talackova, a statuesque, blonde transgender model from Canada, who says she underwent surgery to become a woman because she was born in “the wrong body.”

The Miss Universe organization, owned by flamboyant and controversial real estate magnate Trump, cited a rule that contestants, who appear before judges in a variety of gowns and skimpy clothing, must be “naturally born” women.

Backed by GLAAD and celebrity feminist lawyer Gloria Allred, Talackova took on the system, arguing, as Allred said, that “she did not ask Mr Trump to prove that he is a naturally born man. Or to see the photos of his birth to view his anatomy to prove that he was male.”

Talackova, 23, underwent her sex change operation when she was 19 and is identified on her Canadian passport as a woman.

Miss Universe gave in last week, saying it would “allow Jenna Talackova to compete in the 2012 Miss Universe Canada pageant provided she meets the legal gender recognition requirements of Canada, and the standards established by other international competitions.”

Tuesday’s announcement saw that ruling expanded to include all transgender beauty hopefuls.

Miss Universe is “close to finalizing” the wording of the new policy but it “includes transgender women in time for the start of this fall’s 2013 pageant season; a time when most of the competitions around the world begin to take place.”

The entry of transgender contestants does not actually mean that any woman can vie for the crown. Not only must hopefuls be between 18 and 26 years old, one major taboo remains: motherhood.

“No, contestants may not be married or pregnant,” the missuniverse.com/missusa website says.

“They must not have ever been married, not had a marriage annulled nor given birth to, or parented, a child. The titleholders are also required to remain single throughout their reign.”

The 2011 Miss Universe winner was 25-year-old Leila Lopes, Miss Angola, who told judges she was so beautiful she “wouldn’t change a thing,” but her best trait was her “inner beauty.”