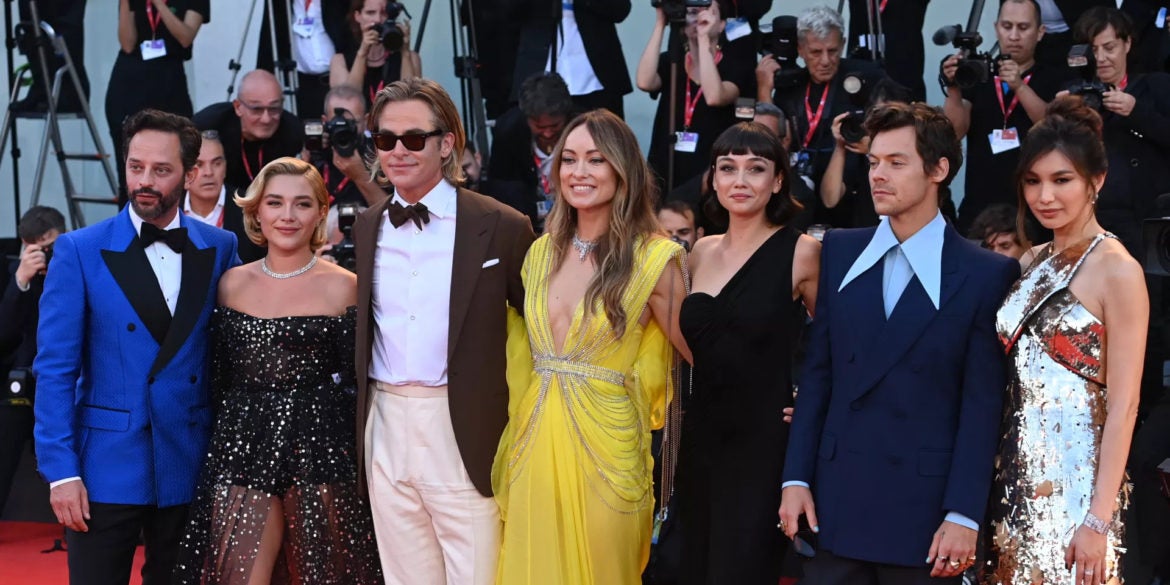 Amidst rumors surrounding the behind-the-scenes relationship between cast members, and expectations on Harry Styles’ acting performance, Olivia Wilde’s latest addition to her directorial portfolio starts off as a box-office success. The psychological thriller “Don’t Worry Darling” starring Florence Pugh, Harry Styles, Chris Pine, and Gemma Chan, managed to rake in $19.2 million in its North America release to cap-off its opening weekend. While speculations on strained work relationships and an undesirable work environment surfaced and gathered attention and momentum, these appeared to be beneficial as it generated more interest in the film, also considering the fact that Styles is the “most famous man in the world” as Pugh would say.

The first sign of trouble was shown when it was reported that Shia LaBeouf was removed from the cast in 2020 just as production was starting, for the role of Jack Chamber, which was later given to Harry Styles. Olivia Wilde later revealed that he was in fact fired due to his particular acting style which negatively affected the set’s working environment. LaBeouf later on responded, citing that he quit due to the lack of rehearsal time with his co-stars. He also publicized screenshots of text messages between him and the actor/director to support the case. Included in the messages is the assertion stating that announcing that he was fired is attractive clickbait that takes advantage of his damaged reputation for the benefit of the film’s publicity.

As if that wasn’t enough, rumors began circulating that Wilde and Pugh had a falling out and are not on good terms. While Wilde has repeatedly attempted to defuse the internet-talk, Pugh has largely remained quiet on the matter. She has also limited her social-media posts supporting the marketing promotions of the film, as well as her own attendance to promotional events. Furthermore, she was also late to its premiere screening at the Venice Film Festival, citing conflicts in scheduling with the production for Dune Part 2.

The internet is divided over what appears to be a clip of Harry Styles spitting on Chris Pine at the #DontWorryDarling premiere. pic.twitter.com/3eQsSPxMor

Serving as the cherry-on-top and fanning the flames to even greater heights, debates started on whether or not Harry Styles spat at co-star Chris Pine at the Venice Film Festival. The discussion began when a video showing Pine clapping while seated, stopped and looked down at his lap the moment Styles approached him. While many are convinced that he did in fact spit at him, the two have both denied the allegations, even with the once One-Direction member cracking a small joke to make light of the situation at one of his concerts. He said “It’s wonderful, wonderful, wonderful to be back in New York. I just popped very quickly to Venice to spit on Chris Pine.”

All’s well ends well as some would have it as the film has so far seen early success. However, only time will tell if this is only due to the controversy surrounding it and its star-studded cast, not the level of acting or story telling involved in the creation of the movie. But somehow addressing these concerns is an earlier comment by lead Florence Pugh, as she voiced out her disappointment on the emphasis on sex scenes in the early promotions for it. She said, “This movie is bigger and better than that. And the people who made it are bigger and better than that.” Perhaps “Don’t Worry Darling” is bigger and better than all the rumors that have so far propelled it to the top of the box-office.