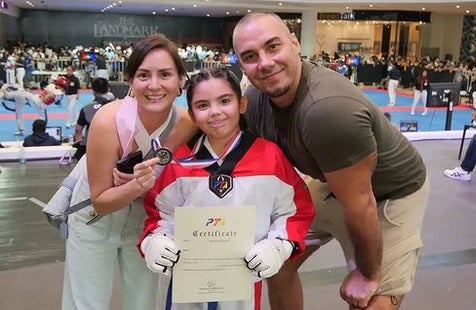 Kramer expressed his elation over her daughter’s silver win in his Instagram post yesterday, October 1, sharing photos during and after the competition.

“So, so proud of our baby doll, Scarlett!,” Kramer initially said.

“This is your first face to face taekwondo sparring tournament, and you got your much deserved silver medal,” he added.

Kramer revealed that Scarlett initially expressed her lack of self confidence and there were times she asked if the sport was for her.

“But each and every time you cried in frustration, you also came back and challenged yourself even more,” he said.

“Keep your eagerness to improve, and learn from your mistakes,” he advised his daughter. “But just like everything in life, nothing really comes easy and you have to put work into it.”

“And when you love it, it’s worth all the tears, challenges, and all the work you put in. All because you didn’t give up. We all celebrate with you Scarlett!” he said.

Kramer admitted that it was tough to see her daughter fall down and get hit but he feels that there is a lot to be learned and he never falters to cheer his daughter up and remind her not to give up.

Kamer also revealed that his daughter always asked him and his wife Chesca Garcia-Kramer about self-confidence and his reply was, “Scarlett, nobody can teach you that but yourself.”

“And today you showed how brave you were in challenging a more experienced and taller fighter in your finals match. Win or learn! We’re all so proud of you!” he said.