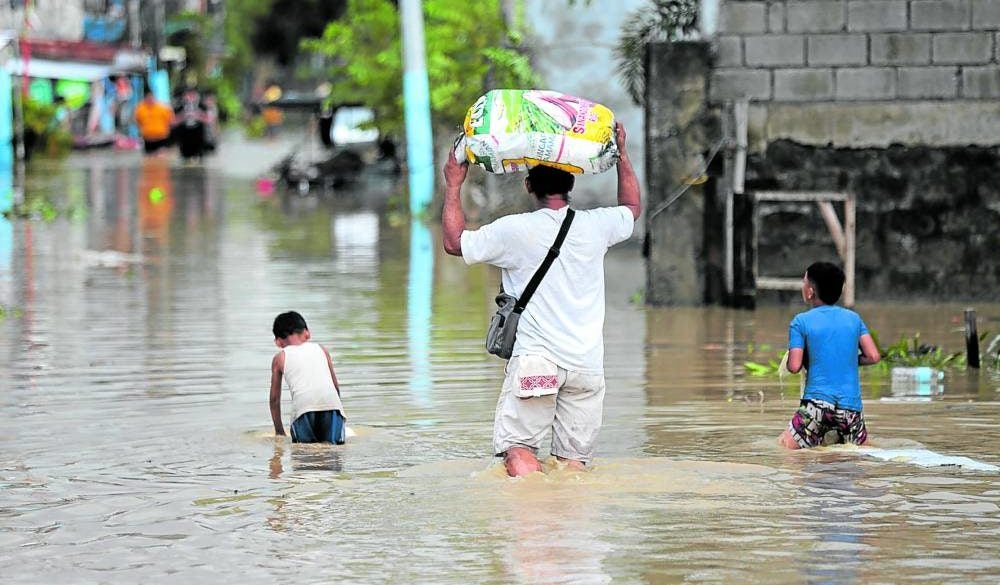 Residents wade in flood waters in San Miguel, Bulacan, a day after the onslaught of Supertyphoon “Karding” (international name: Noru). Wading in floodwaters exposes one to diseases. —GRIG C. MONTEGRANDE

Beware of ‘left toe spirosis’ and other ‘Wild’ diseases

I n his message in our Viber group a day after Supertyphoon “Karding” (international name: Noru) had left the country, Dr. Erric Cinco, current president of the Philippine Heart Association, warned that we should only wade in the flood with our right foot.

Thinking it might be a recent discovery, a few of us immediately asked him why, and he replied that we should make sure that our left foot is safely above flood water, so as to prevent “left toe spirosis.”

Of course, it was intended to be a joke on how one gets infected with leptospirosis, the notorious flood-borne infection that may lead to serious complications like acute kidney failure (uremia), liver inflammation (hepatitis), swelling of the heart (myocarditis) or its covering (pericarditis), the brain structures (encephalopathy) and eventually death.

Leptospirosis is one of several infections associated with torrential rains and flooding. Our Department of Health (DOH) previously called them the “Wild” bunch.

With the torrential rains, as we have had the past month, we may be at risk of getting this “Wild” set of infections unless we take precautionary measures.

And depending on its severity, it might be potentially deadly. Children, the elderly, pregnant women and those with weak immune systems are more at risk to develop serious complications. So we better beware.

By “Wild,” we don’t really mean any untamed or ferocious behavior making us acquire a disease, although the monsoon season can show a natural tendency for such ferocity with various natural calamities. “Wild” actually stands for four diseases that usually come with the rainy season. Wild, as coined by the DOH, is an acronym for water-borne diseases, influenza, leptospirosis and dengue.

They can make our lives much worse than in prepandemic times, as they currently team up with COVID-19. Frequently, it’s difficult to distinguish just by signs and symptoms if it’s COVID-19 or not.

Practically all of them will present with flu-like symptoms. Laboratory confirmation is needed to determine which type of infection one has.

The main culprits for getting Wild are wading in the floods, drinking contaminated water and increase in the number of Aedes aegypti, the dengue virus mosquito-vector.

Dr. Edward Tordesillas, former president of the Philippine General Hospital Foundation and an expert in Community Medicine, wrote in a comprehensive article on Wild published a few years ago how the public can prevent getting afflicted with any of the Wild diseases.

Simple precautions like boiling drinking water, washing hands frequently and using boots when wading in flood water are effective preventive measures. Immediately washing thoroughly with soap and water as soon as possible after wading in the flood, staying away from crowded places, getting rid of potential breeding places for mosquitos and maintaining a strong immune system by having adequate rest and nutrition—all of these can go a long way in preventing Wild diseases, which can lead to serious complications, even death, in some patients.

Influenza, or the common flu, is caused by a viral infection that attacks the lungs, airway and skeletal system. It’s pretty much the same as COVID-19. If a patient suspected with COVID-19 has negative antigen tests or nasopharyngeal swabs, the diagnosis is downgraded to influenza or simply flu.

In general, flu is a self-limiting disease, and the individual with flu usually improves with just supportive care after a few days. Occasionally, though, especially in those with weak immune systems, the flu virus can also attack the heart, causing swelling (viral myocarditis), and the brain (meningo-encephalitis).

The virus is usually transmitted via direct contact with a person who sneezes or cough. According to Dr. Tordesillas, it can also be transmitted through surfaces, material and clothing contaminated with the discharges of an infected person.

Flu is best prevented by avoiding crowded places, covering one’s mouth and nose when sneezing or coughing, and practicing proper hygiene by frequent hand washing. For those with weak immune systems, having an annual flu vaccine is also recommended.

Although wearing of face masks is now deemed optional outdoors, it may save one from getting Wild or COVID-19 when in close distance with other people, such as when commuting in public.

In addition to what we already said about leptospirosis, it is a bacterial infection caused by leptospires or spirochetes. Dr. Tordesillas explains that it is usually transmitted through exposure to rat urine and feces, which may happen if we wade in contaminated floodwaters. The spirochetes can directly enter through broken skin and open wounds. One may also get leptospirosis by ingesting contaminated food or water. Some may get it through the eyes, nose, sinuses and mouth when in contact with contaminated water or soil.

One usually experiences the symptoms seven to 14 days after exposure to floodwaters. The signs and symptoms are pretty much similar to the common flu, and include fever, muscle pain especially the calf muscle, and headache. One distinct sign is the appearance of reddish eyes.

“Some severe cases, if not detected early enough, may lead to brain, liver and kidney problems,” warns Dr. Tordesillas. So, persons developing a flu-like illness two weeks after wading in floodwater should give that information to his/her doctor. Kidney complications sometimes require dialysis. Liver complications may manifest with yellowish body discoloration (jaundice) and dark-colored urine.

Dengue, also caused by a virus, is with us all year round, but the incidence increases during the rainy season because of the increase in the breeding areas for the female Aedes aegypti, the vector-mosquito.

In a small percentage of patients, dengue may be fatal, causing bleeding and shock (dengue hemorrhagic fever). Not all cases of dengue should be admitted, though. Dengue without warning signs may be managed on an outpatient basis with close monitoring by the physician, up to a week after the fever has subsided. It can be misleading, and complications may happen when the fever has subsided already.

Dr. Tordesillas advises confinement for dengue cases with warning signs, such as abdominal pain or tenderness, vomiting, mucosal or nasal bleeding, restlessness, decrease in platelet count and increase in hematocrit levels. “Hospitalization is necessary at this point for observation, monitoring and proper medical management,” he explains.

Severe dengue, presenting with severe bleeding, severe plasma leakage leading to shock and respiratory distress, impaired consciousness, and signs of liver damage, leading to high levels of the liver enzymes (SGPT and SGOT), should be managed in an intensive care unit.

Prevention is mostly environmental—by getting rid of mosquito breeding places, advises Dr. Tordesillas. The DOH has released the following pointers on how to get rid of breeding places: Cover water drums and water pails to prevent breeding; clean all water containers once a week; puncture or cut old tires used as roof support to avoid accumulation of water; and clear gutters of leaves and debris to prevent rainwater accumulation as breeding places of mosquitoes.

So, let’s heed the precautions, and prevent getting Wild this rainy season. We still have our bag of worries full with COVID-19. Let’s not make it more complicated than it already is.