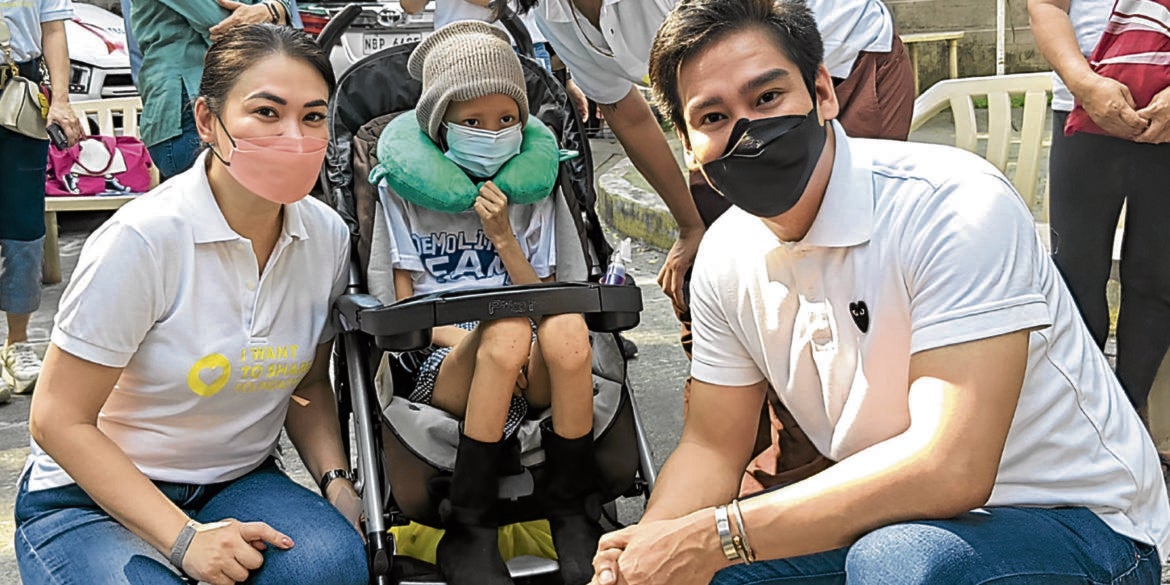 Romero (left) with Eunice, a patient with a brain tumor, and Romero’s sister Samantha Bermudez and cousin Nas Bermudez

What will I share? My business? What I do? Who do I wear? That was my past life,” said humanitarian, multitasking executive and restaurateur Sheila Romero. Acquiring a distaste for worldly talk, she preferred to discuss matters of the spirit. “I would agree to talk about my advocacy for children with cancer, surviving cancer and faith.”

Before the pandemic, Romero was interviewed about her hospitality business, the Nara Thai restaurant franchise, family life and her position as vice chairperson of AirAsia Philippines (which she relinquished last year).

Over lunch, Romero, characteristically stylish in a burgundy cowl neck blouse, a neutral-colored skirt and fine jewelry, was effusive about her renewed life and her realizations from her Bible studies.

Early 2020 was unkind. In February, she was diagnosed with stage 3 breast cancer two days before being cited as one of the recipients of the People of the Year Award from PeopleAsia magazine.

Her succeeding treatments were rigorous. She submitted to lumpectomy performed by specialist Dr. Norman San Agustin, Asian Breast Center president and CEO; four cycles of chemotherapy in Singapore and another three cycles under oncologist Dr. Gary Lorenzo; and radiation at Makati Medical Center. Distressed by hair loss, she bought a cold cap from Singapore, infused with an extremely cold gel, and wore it during chemotherapy. The cooling system constricted the blood vessels in the scalp to reduce the amount of chemo medicine that flowed into the hair follicles.

As if life-threatening conditions weren’t enough, her ventures became pandemic casualties. The intense lockdowns forced her to fold up Nara Thai at Ayala by the Bay even before its formal launch and the construction of the Greenbelt 5 branch.

Instead of being disheartened, Romero saw the downtime with a supportive family as a period for contemplation which subsequently led to an awakening. Virtual Bible studies and one-on-one sessions with Jasmine Sy of Christ’s Commission Fellowship gave her courage, especially when fear of death emerged.

“There’s no point in thinking about something that’s not even there. What causes cancer? They say it’s stress, emotions. I’ve had problems in business. My son, Miguel, passed away at age 22 in 2017. The acceptance was that he had another purpose and one of them was to guide our family. You pick yourself up and stand up again. When there’s depression, I believe that you’re the only cure. No matter how often you see a doctor or if other people tell you to do this or do that, if you don’t like to do it, you are never going to get out of the rut,” she said.

Work likewise kept her spirits up. Her husband, party-list congressman Michael Romero, had always believed in her natural leadership and entrusted her with the family businesses. She is the chair of Global City Mandaue Corp. which oversees the 100-hectare waterfront development in Mandaue City, Cebu. The township concept was inspired by the view of Esplanade, the world class performing center by the bay, from her quarantine hotel in Singapore. Romero is also chair of the holding company GlobalPort 900 Inc. and Global Port Terminals Inc. The Romeros ventured into several energy businesses, which include solar energy and power distribution. She is the chairperson of Belgrove Power Corp. Meanwhile, she is excited about the opening of the second branch of Nara Thai at Molito Mall, and she still manages to look after her youngest, the 6-year-old Stefan,

“I delegate responsibilities and I take everything one day at a time,” said Romero.

Making plans and trying to control events had been her mindset in the past. Tests in life taught her to surrender when things didn’t happen as intended. The balance of work, family and spiritual life has made her more resilient and less reactive to situations. “I’m at the peak of my career. This comes with a sense of purpose,” she added.

Between presentations, meetings, paper work and family bonding, Romero has been mobilizing I Want to Share Foundation, originally born in 2013, after the pandemic.

“I wanted to help a group where I could see growth,” she said. Initially it organized calamity relief operations and medical missions and provided scholarships. In 2015, the Philippine General Hospital was in need of other sources of funding. Romero took on the Pediatric Hematology-Oncology ward as her major beneficiary.

Romero recalled that after a life-threatening delivery in 2016, she understood the plights of mothers, particularly those of indigent patients. “I know the fear and the anxiety of being jobless and where to get the money and medicines,” she said. The foundation has been making quarterly donations that paid for medicines, consultations and tests outside of PGH, as well as paying the administrator of the funds and for the WiFi.

“An average of 300 kids with cancer go to PGH. To see some 120 patients graduate from chemotherapy is a feat,” said Romero. In the past, the foundation organized a fashion show, directed by Robby Carmona, where the patients strutted down the runaway in donated formals. In 2019, it held a fund-raising auction and an exhibit of artworks by young cancer patients at Salcedo Auctions.

Last September, actor Dominique Roque, a friend of her children, and columnist Tessa Prieto cheered up the patients at the ward.

Recalling her own hair loss during the treatments, Romero formed the I Want to Share My Hair Campaign. People donated long locks of hair, sans chemical treatment, that were made into wigs for cancer patients.

At this writing, she is putting up the Childhood Cancer Help Desk with PGH. The objectives are to give hospital referrals and to lend a sympathetic ear to anxious parents. Telcos have committed to provide free powerlines for a call center. Plans are afoot to revive the fashion show to boost the morale of the children and a graduation ceremony in February 2023 for patients who have completed their cycles.

“People think cancer is a death sentence, but it’s important to give hope,” explained Romero. “If somebody asks you to help a cancer patient, be optimistic that the family would find ways and means to extend life. I’m a survivor for these kids. If you can help, why not donate or share your time with them?”