At Modan, Jorge Mendez comes into his own | Lifestyle.INQ ❮ ❯ 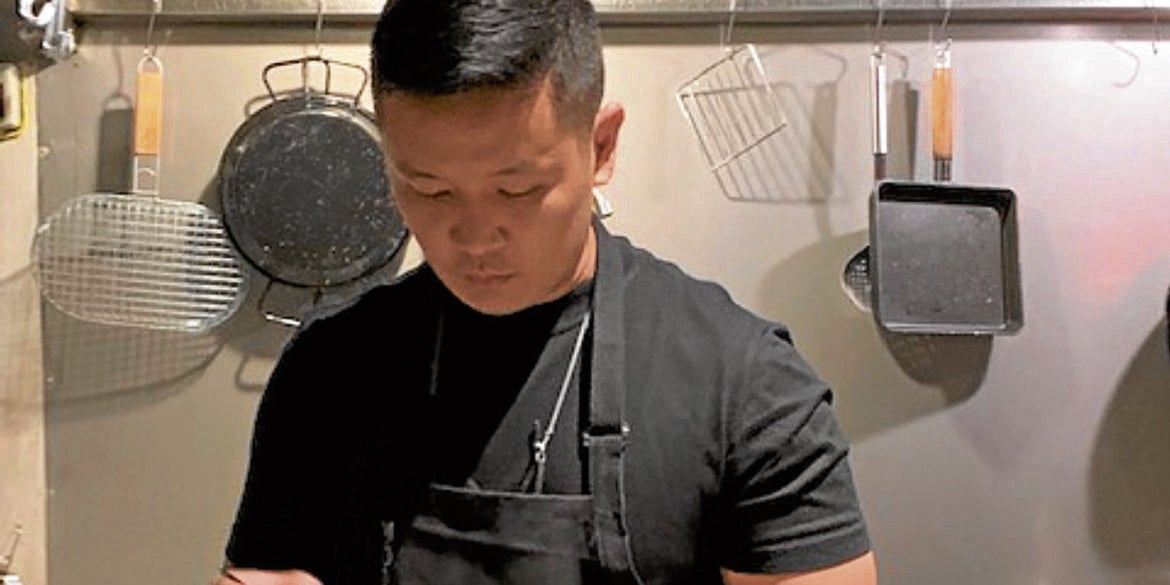 At Modan, Jorge Mendez comes into his own

I’ve known Jorge Mendez for a long time now. Eight years, to be exact. I was hired to style the dishes for a casual Katipunan restaurant where he was head chef. While the photographer took his shots, we found ourselves engaging in food conversations. Humble and hardworking, the young dad showed so much promise that I decided to introduce him to my circle of chef friends, in the hope that his talent would be developed even further and that opportunities more fit for someone of his caliber would open up. Fortunately, things worked according to plan.

At 30, Jorge is now ripe and ready to show his capacity, and as a good friend and business partner (we run Byrd Tubs), I can’t be any prouder.

Tucked along the long stretch of 20th Avenue in Quezon City, at the foot of a residential building, is Modan, his 12-seater private dining space. It’s a project that has been a long time coming, and yet, realized at a perfect time as Mendez got to travel around the world, work beside the likes of Chele Gonzalez and Margarita Forés, and soak up experience he can use.

“I believe I’m not the only chef who has always dreamed of having a space where he can be himself, be creative and showcase the skills he has acquired through the years. I sense that I’m ready and I feel like it’s the next and only step to take.”

The restaurant is much like his personality—unassuming and not intimidating. Don’t expect crisp, white linens and a stiff vibe that often takes the fun out of dining. At Modan, you can simply relax and revel in friendly service and food that is marked by a finesse molded by his arsenal of techniques. His repertoire has a certain refinement that doesn’t alienate, with nuances that elicit curiosity that’s eventually rewarded with delight.

Take the first dish of his 10-course Japanese tasting menu, for example. The server places a small tea cup filled with taro foam drizzled with chive oil. Next to it sits a small skewer of tendon tempura. It might be a bit too in-your-face as an opening course, but once the bonito flake-seasoned onion broth is poured on the bowl, it turns into something more familiar. Have the first soothing sip, match it with the chew from the fried nugget of collagen, and you get a satisfying sense of how the inspired chef can excite your senses from the get-go.

For his maiden menu, Jorge tips his hat to the individuals who had a hand in shaping his being. “I’ve always been a fan of these people, and I feel like this is the best way I can honor them,” he says. “They have been a big part of how I grew as a chef and person and I hope they can appreciate this gesture.”

His supportive and encouraging family, of course, is in the mix—his innovative take on a takoyaki for his wife Cheenee, a Nihon castella and cheesecake hybrid for his daughter Caprice, and a melon shoga granita crowned with mentaiko for his son Caper.

Not to be left out is his mom Mercy, who is responsible for introducing him to Japanese cuisine. He hasn’t forgotten his very first taste of tempura and miso soup, which she served at home. His mom worked in Japan for three long years and during that time, these dishes, along with her care and company, were what Jorge missed the most.

Raul Fores of Mamou and the soon-to-reopen Nokal (watch out for it in a nondescript place in Makati) had this to say about Jorge’s food: “Modan in Japanese means modern, which in this case is how the word is being used. However, in Bangladesh, Modan refers to the god of love and infatuation, which more accurately describes how I feel about the restaurant. Chef Jorge comes in hot into the arena of Philippine tasting menus with a banger.”

Food influencer Leslie Cheng (@shootfirsteatlater on Instagram) also had an equally glowing review. “I’ve always said that Jorge is someone to watch. He impressed me with his food from Ohayo and Byrd Tubs. But, wow, his creativity in Modan is through the roof. It was Japanese food like I’ve never tasted before. Each bite was a surprise and delight.”

It’s about time the rest of Manila sees what I saw in him years back.