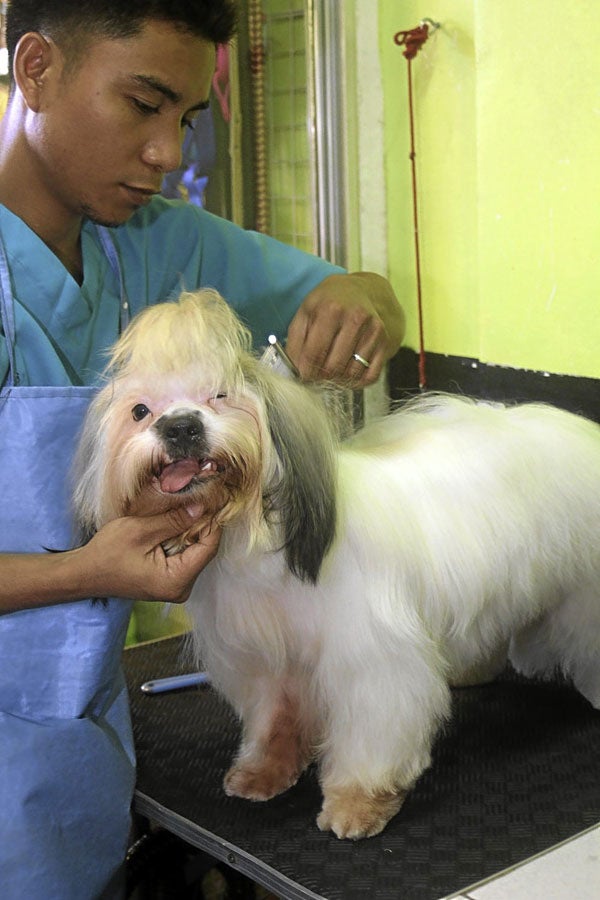 Grooming is a luxury that pets enjoy

Home Service for the Well-Groomed Pets

By: Marlet D. Salazar     Philippine Daily Inquirer / 09:13 AM June 25, 2011
Dogs and cats are meant to be showered with love. They are among the most adorable pets in the world, affectionate and always responsive to an owner’s need for attention and affirmation of existence.

In return, humans try to treat them as family, talking to them like kids, buying them clothes, and often spoiling them to death.

And who can blame them? Dogs will love their humans unconditionally. The incessant wagging of their tail is a testament to how ecstatic they are to see their owners. When these humans are sad, expect their pets to stay constantly at their side as if commisserating with and sharing their owners’ angst.

With such mutual affection, it comes as no surprise that in the Philippines, businesses that cater to the needs of pets are booming. There is a growing number of pet shops, parks and establishments that welcome pets, dog shows and grooming shops.

Grooming is one of the luxuries that owners can give their pet, and perhaps one that the animals will appreciate more than the ultra-expensive doggy carriers or neat costumes during Halloween.

This explains the existence of Clean Paws Grooming and Pet Station, located just beside the upscale residences of Bel-Air and Palm Village and one of the latest pet grooming salons dotting the Metro.

Lira, who holds a degree in Financial Management from St. Scholastica’s College Manila, used to work in a financial institution until she decided to go into the pet shop business. “It was one of those ‘looking for myself’ times,” she muses.

After a year, Lira and her partners thought of stepping up their game by going mobile – with a mobile pet grooming van – that is.

“I realized that we can do at least four dogs in one visit aside from the ones being groomed in the shop,” says Lira. From one groomer, Clean Paws now has three.

The van has all the amenities offered in a pet grooming salon. It has an air conditioner, a sink, blower, and everything that every well-groomed pets need. Clean Paws’ grooming services include ear cleaning, nail trim, anti-static ultra silk conditioner with UV protection for the fur or hair, tooth brushing, and medicated bath, among others. It also has a feline package of partial and full grooming services. Haircuts cost from P150 for small breed puppies to P350 for the larger canine breeds.

The most popular breed that Clean Paws gets to groom is the Shih Tzu, followed by Pomeranians. These are the really hairy and furry dog breeds. “Most of our customers are toy dogs,” she says.

Surprisingly, Lira reveals, among their customers are a number of native dogs whose owner lives at North Forbes. Lucky askals.

“Because native dogs have shorter hair or fur, they are much easier to groom,” she says, noting that long-haired dogs can take up to two hours for a full grooming session.

The “most unusual” breed of dogs that Clean Paws has groomed is the terrier. There are different sub-breeds of terriers and Lira says they are probably one of the most difficult to groom because of their long hair. However, Jack Russel Terriers are the most fun (albeit difficult) to blow-dry because they are the most hyperactive among the canine pack.

Pleasing the dogs is the least of Lira’s and the groomers’ concern. Pleasing the owners tops their list. “The dogs won’t complain when we accidentally ’hurt’ them when they struggle,” she says, “But the owners do and we understand them because these dogs are like their babies. However, those few instances were always unintentional.”

If there are difficult owners, there are also really nice ones, says Lira. She appreciates how some pet owners even serve them merienda during their home visits. “It’s a simple thing but it really feels good that they appreciate what we’re doing.”

The mobile van has improved their profit margin a lot, says Lira. “It also helps that we don’t have to pay rent for a fixed address,” she adds. “If we don’t have a call for grooming, then the van won’t have to use fuel.”

Lira, who also has an English Cocker Spaniel named Sam and a Golden Retriever named Roxy, has been trying her hand at grooming as well. “When we started this business, I really read a lot about dog breeds and grooming,” she shares, “If all the groomers are out, I can do the basic shampoo, blow-dry, and the simple haircut.”

Lira confesses that she is not the “obsessed” type of a dog owner. “I see my pets as dogs, not as kids,” she says. “But it doesn’t mean I love them less.”

For now, she enjoys her business and has no plans of going back to being just another employee. “Maybe our generation has a more entrepreneurial spirit,” she adds. •