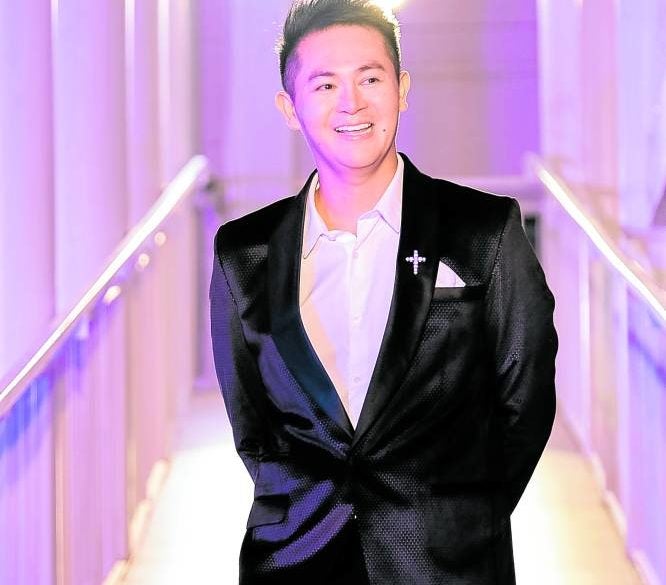 Oct. 10, the date designer Michael Leyva chose to hold his fashion gala at the National Museum of Natural History in Manila, was a special one because he was marking his 10th anniversary on 10-10.

Leyva’s clients come to him for evening wear in crayon brights, although he is also known for black formal gowns.

Those who have been to the museum know that suspended over the main lobby is a huge skeleton of a Marinduque sperm whale. That evening, the venue served as the guests’ holding area before they were led to their seats, which were arranged salon style.

Leyva was thrust into the world of design a little over a decade ago after the death of his older brother, designer Brian Leyva. Michael had actually been studying to be a flight attendant, which he had the chance to try out, before deciding to carry on Brian’s work.

In the short video shown before the models came walking down the ramp from the building’s top floor, Michael talked about how he feels his brother’s presence when he designs.

“I didn’t know how to choose fabrics or notions but I soldiered on. I would meet with clients at coffee shops after scouring Divisioria for fabrics because that was what I could afford,” he recounted.

He’s come a long way since. Last year, he presented a 30-piece collection in Dubai after renowned designer Michael Cinco vouched for him, effectively securing a place for him at Arab Fashion Week 2021.

For his gala show earlier this week, Leyva presented a 53-piece collection that consisted of slinky evening gowns with dramatic details like statement sleeves (long, ruffled or wing-like), voluminous skirts and several heavily sequined numbers that caught the light and threw it back to the audience. The designer also presented cocktail dresses as well as several men’s suit jackets worn with matching shorts, again accented with sequins or painterly details.

The show could have benefited from tighter editing and a more energetic pace, but the designer told Lifestyle in an email interview that he “wanted to show that Filipino designers are capable of doing a lot of beautiful gowns; our talent is world-class.”

Leyva described his design aesthetic as one that champions versatility because “we Filipinos always adapt to any circumstance. We are resilient and flexible.”

His models that evening included Miss Universe 2015 Pia Wurtzbach, who opened the show, and comedian and TV host Vice Ganda as his bride, wearing a white trailing gown with matching oversized sleeves.

The designer described the Michael Leyva client as “an elegant woman, someone who is confident and capable of extraordinary things.”