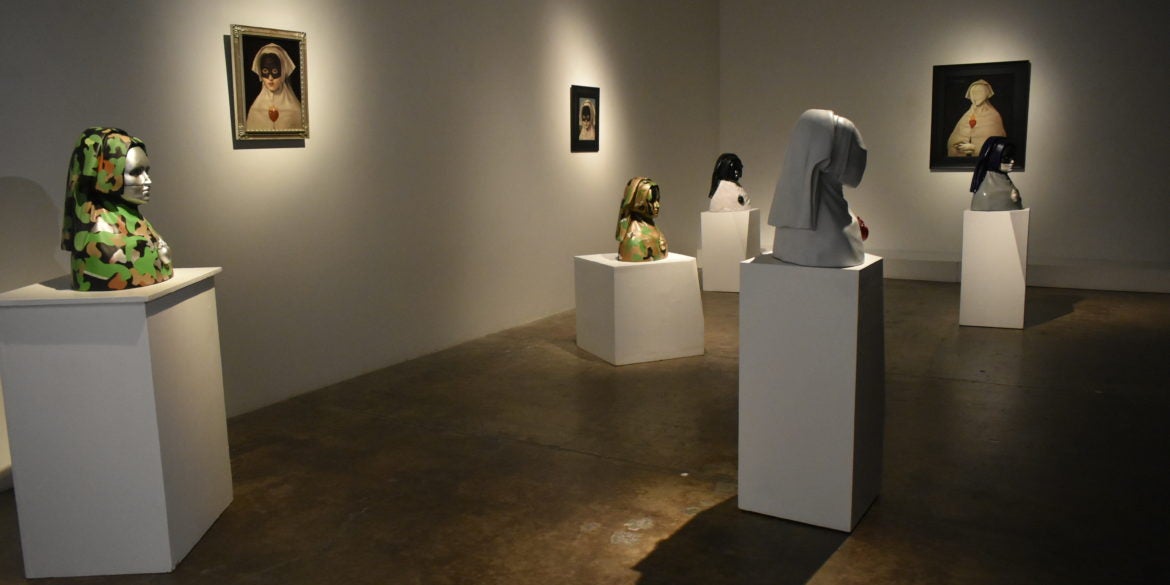 There is something about unknown worlds that is so captivating. From the Marvel Universe designed by creative genius Stan Lee to J. R. R. Tolkien’s “Silmarillion” and its intricate genealogies, or even the multiple dimensions in the recent hit film “Everything Everywhere All at Once” – each fictional universe has inspired widespread fandom.

Filipino artist Jason Montinola has been creating various portrait series of recognizable characters for over two decades, each with slight variations in their physical traits. But this is his first exhibition where he reveals that he has created a fictional story for each portrait that is part of a bigger universe. These characters come to life through two and three-dimensional works in “Here Lies the Painter”, Montinola’s most recent exhibit which opened at White Walls Gallery in Makati last October 5, 2022. 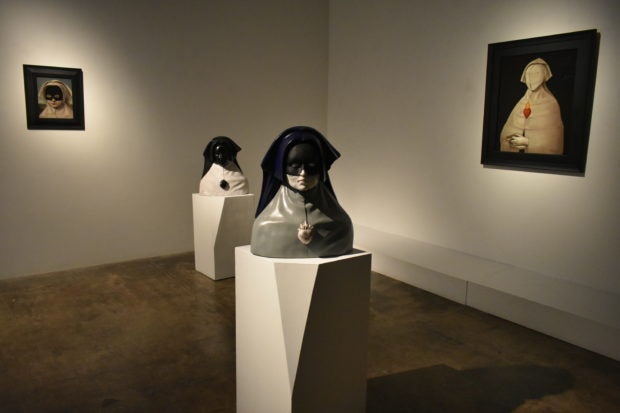 Out of the many characters created by Montinola, just one is exhibited here (although in many forms). At first glance, the figure appears like a nun from the Middle Ages. In actuality, it is a creature without a name. Instead, it is called “Here Lies the Painter”, hinting at the famous art theory essay by Roland Barthes “The Death of the Author”. Montinola credits this nameless character as responsible for many of the great works in art history: from Hieronymous Bosch’s Garden of Earthly Delights to Leonardo da Vinci’s Mona Lisa. The creature also has a process. Dressed as a nun, it first talks to the artist who is looking for inspiration. Afterwards, it recedes into its headdress, covering its face with its veil in a motion of humility. Shifting inside its cloak, it pulls out a subject or muse – a twisted monster from the depths of the netherworld for Bosch, or a miniature flying machine for Da Vinci. The legendary artist uses whatever subject it pulls out of its veil, then incorporates it into their work to make waves in art history. 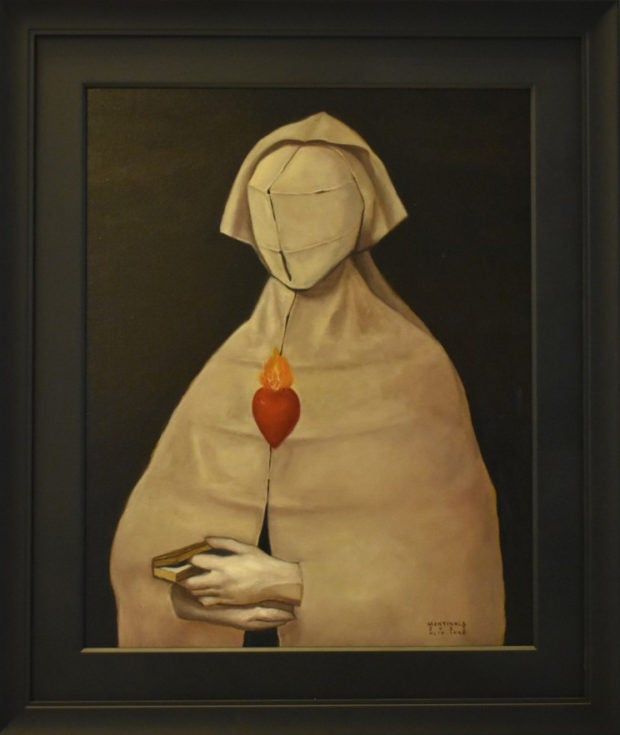 Since its first appearance in “Here Lies The Painter (1455)” at West Gallery in 2011, the artist has been re-painting iterations of this specific character in the last decade. It always appears like a nun, sometimes with a slight smile or a third eye above a black mask. The Sacred Heart on its cloak is a recurring feature. It also appears in later shows, sometimes dated in 1450 for a portrait in Kuala Lumpur. While most of Montinola’s portrayals are set in the 15th century, he describes the creature as having existed since the beginning of time. It helps artists find inspiration, from the first cave paintings of the Elks to the surrealist drawings of Dali. He also hints at its presence in his current studio, and that it is still making suggestions today for the masterworks of contemporary artists. This is just one of the characters where the artist is the maker of a universe with personal stories for each portrait. Sensational Painter and Beast Buster are some of the other recurring characters in Montinola’s paintings, familiar to many collectors. 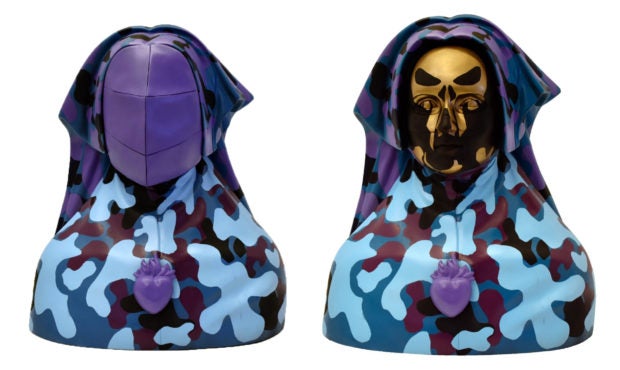 On exhibit at White Walls, Medieval-esque portraits hang on the wall, while 3-dimensional works stand on pedestals in the open space. More of a fine art toy than a sculpture, the piece has a magnetized covering that can be removed or attached above the portrait’s masked face. There is also a magnetized Sacred Heart symbol. Some of the works are painted with modern references to characters in superhero fiction, adding a sense of lightness to the show.

Since exhibiting widely in the country and abroad, Jason Montinola’s distinct aesthetic and imagined universes add to the growing landscape of art in the Philippines, more so with numerous international projects and recent group exhibitions with the community-based initiative PARA Collective

Conceived in 2016, White Walls Gallery launched its permanent space in the La Fuerza compound in 2020, with growing contributions to a platform of dialogue and ideas of contemporary art in the Philippines. 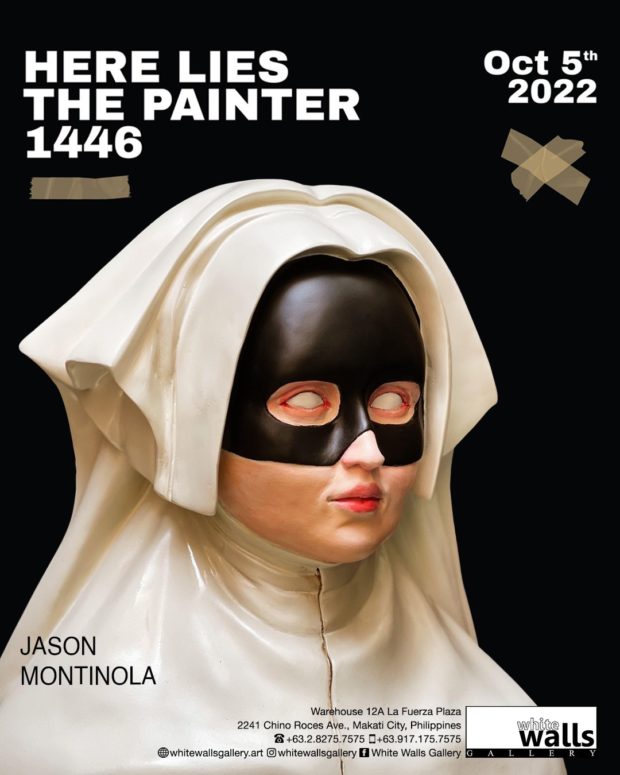 “Here Lies The Painter” will run until October 18, 2022 at White Walls Gallery at Warehouse 12A, La Fuerza Plaza, 2241 Chino Roces Ave, Makati, Metro Manila, Philippines. The gallery is open for viewing every Tuesday to Saturday from 1 to 6 PM. All shows are accessible online via whitewallsgallery.art.