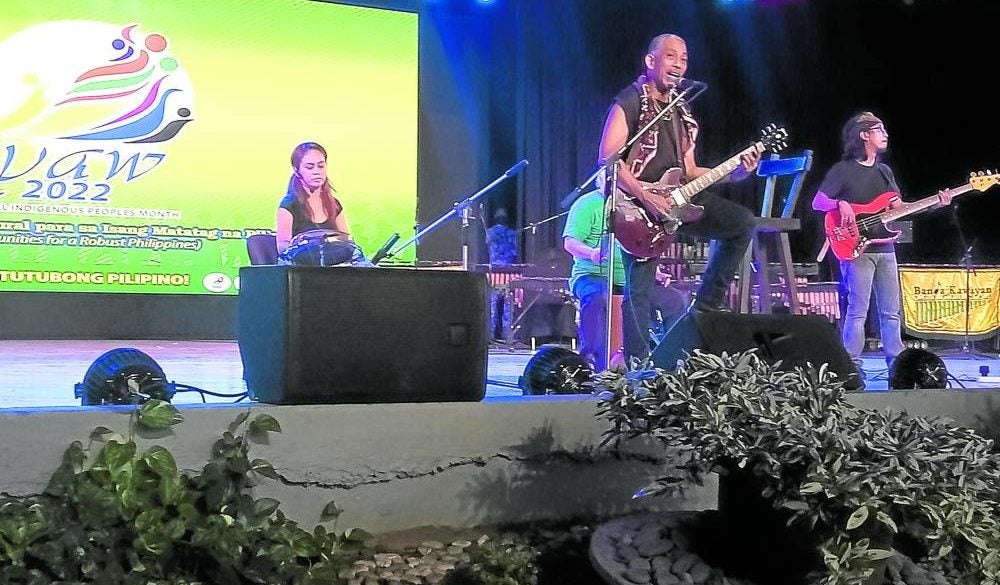 The National Commission for Culture and the Arts (NCCA) ushered in the National Indigenous Peoples Month in a blaze of color and sound, tribal chants and courtship dances; gongs, drums and bamboo percussion instruments, dazzling costumes; the women graceful, the men strong and sturdy, the performers representing Luzon, Visayas and Mindanao. The celebrations were held recently at the open-air auditorium of historic Rizal Park (the Luneta of popular imagination) in Manila.

The theme of the annual, monthlong event following two years of virtual convening, is “Upholding Cultural Communities for a Robust Philippines.” The focus this year is on the role of cultural communities in managing the COVID-19 pandemic while safeguarding the indigenous peoples’ (IP) cultural heritage, and in strategies for moving forward.

The performers were from the Kalinga Budong Dance Troupe and the Pusaka sa Maguindanao. A Panay Bukidnon elder, accompanied by tribal maidens, offered a ceremonial invocation, as did a representative of the Manobo Talaandig. The Banda Kawayan ng Pilipinas, always a crowd favorite, rendered Filipino folk songs while the men danced around in precise steps blowing on their bamboo mouth harps; and the women, seated, swayed to the music while playing on their instruments.

The final number of the program was Joey Ayala and his resurrected Bagong Lumad, now with three new members.

In between his songs of social awareness and environmental advocacy, Ayala gave a spiel on national identity, citing his own background as an example. His father, a writer, was half-Chinese while his mother, a poetess, was half-Portuguese, he said. An Ateneo alumnus, he grew up in Cubao, Quezon City before the family moved to Davao City. They stayed there for many years, where he began to speak in Visayan and started to write his own compositions.

He intoned, “Ano ba talaga ang tribo ko? (To what neoethnic group do I belong to?). I needed a clear-cut national identity that was ‘politically correct.’ And that is why I called my group Ang Bagong Lumad (the New Native).”

“I want to announce to the entire Philippines that we (the katutubo or indigenous) are still here despite (everything),” said Gonzales. “So much has been happening, we are very resilient. We are alive, we are surviving … Nothing can stop them (us). Tuloy tuloy Dayaw (onward). We are ready to face issues, culture, provenance, although we are often discriminated against.”

Datumanong said, “There are piracy issues, property rights, intellectual property. We must institutionalize this, provide funds to institutionalize culture and art. We need to empower the IPs.”

“We need to assess, evaluate what we are doing,” added Casaysay. “Our katutubo are more creative now. They want to learn, to increase their knowledge. Projects to help the indigenous must be sensitive to their lifestyle and culture, they must now offend. They must avoid that iba sila, iba tayo (we are different) sentiment. We are Filipinos.”

Activities for the month include the following: Oct. 12, Celebration of the Aeta Community, Brgy. Dacal, San Enrique, Iloilo; Oct. 12 to Oct. 13, training workshop on indigenous materials, Northwest Samar State University; Oct. 15, Zoom. LikHaraya three-day seminar on the traditional and creative arts, for senior high school students. Output will be an online exhibit on the part of the students, to be organized by NCCA Likha-an Resource Center.

LikHaraya will be held again on Oct. 22.

The 15th Kadagdagan Festival will be held Oct. 23 and Oct. 25 at the Municipal Gymnasium, Poblacion, New Corella, Davao Del Norte. On Oct. 23, there will be a Dayaw 2022 main event at the Rizal Park Open-Air Auditorium with performances of music, dance and oral traditions, bringing together more than 300 representatives from the northern, central and southern indigenous communities.

On Oct. 24, at the Manila Metropolitan Theater, there will be a forum on best practices to safeguard the cultural communities’ intangible cultural heritage.