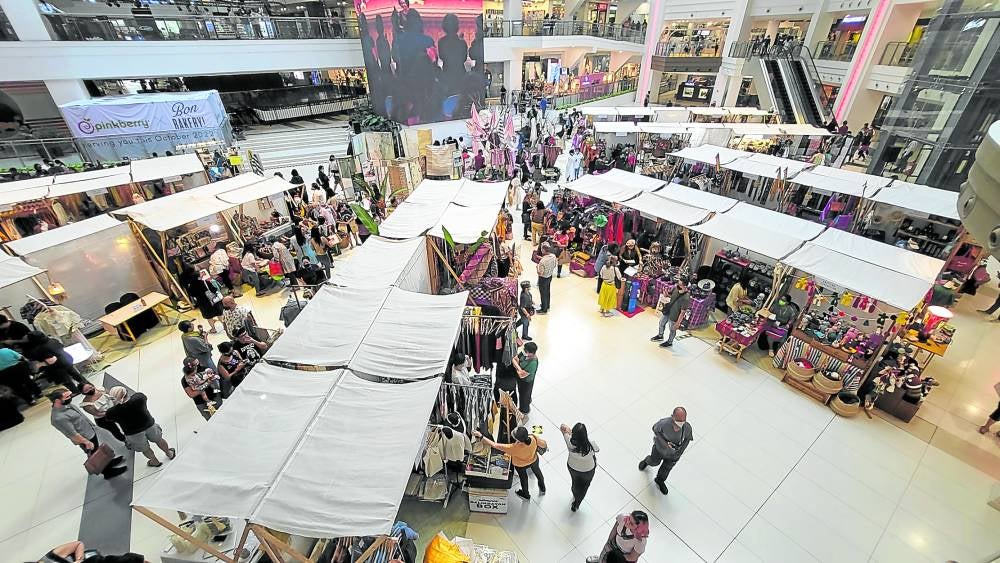 The number of vendors was limited to 60, fewer than what they used to allow prepandemic, as the organizers were uncertain if people would come to the bazaar at all.

“But now we see that people are excited to go around,” council president Adelaida Lim told Lifestyle.

There was a buzz of excitement as shoppers milled about, going from stall to stall, admiring and asking about the handwoven fabrics, ready-to-wear clothes and accessories and home accents and eventually lining up to pay for their purchases. There was no need for Habi to worry, after all.

Lim acknowledged that holding the fair online for the past two years “was very interesting because suddenly we had international buyers.”

We pointed out how more young people are supporting the use of locally made clothes that are made of local weaves. It’s not just the moms and the titas now, but a younger set of consumers.

“Actually, that’s what we see is happening. Before there was that idea that you wear these things as Filipiniana, it’s your national costume,” explained Lim. “But now people are wearing it for every day. And people like it. For us that’s very encouraging and that has created good income for the weavers.”

Rurungan Collective and Creative Definitions are just a couple of vendors at LHMF which promote the use of locally sourced materials and handwoven textiles in everyday wear.

“Our focus is really making contemporary designs so that they are more wearable,” said Ria Lim of Rurungan. Dresses in bright colors, cover-ups, tops for both women and men are some of the handwoven wear from the Palawan-based brand. It was intentional to make pieces that are more accessible and that won’t make the wearer think too hard whether she or he can pull it off.

Ria shared how, in recent times, people have been taking notice of Rurungan’s pieces and developing more interest in Philippine weaves. When they started, it was so hard to convince people to buy local because many would easily assume that if a garment is made here, it should be cheaper.

“As time went by, people started to actually pay for the cost of a handwoven item. So there’s been that change in the past few years. People cherish it more, they value it more.”

“The Philippines is gifted with so many natural fibers so the challenge is to convert them into something wearable,” said Mike Claparols of Creative Definitions. Their water-repellent Lakat sneakers are made from a blend of pineapple and cotton fibers which are sourced from the farmers of Kabankalan in Negros Occidental. The shoes’ outsoles consist of natural rubber farmed in Mindanao.

It is their advocacy to bring in more value-added processing here and to revive not only the weaving industry but the whole textile industry of the country.

Among the highlights of this year’s LHMF is the first Eloisa Gomez Hizon Abaca Competition. Habi trains the spotlight on abaca to promote another indigenous Filipino textile and encourage its weavers. The competition was named after the mother of Dom Martin Gomez, a former fashion designer who became a contemplative Benedictine monk. He started the competition in honor of his mother to encourage weavers to go into abaca.

The best piña weavers were also recognized in Habi’s 5th Lourdes Montinola Piña Weaving Competition. Among the winners was 13-year-old Delara Beltran, daughter of Raquel Eliserio of Raquel’s Piña Cloth Products. According to her older brother Carlo, Delara, who had to miss the event because of school, took an interest in weaving at the age of 6. His sister couldn’t even reach the loom’s pedal when she first took an interest in the craft, he said.

“We started a special prize for young weavers under 30 years old,” Lim said. “We were surprised how many young weavers are there. Akala namin wala nang gumagawa, marami pa pala.” She showed us Delara’s creation which consisted of piña and silk, describing it as “beautiful and so fresh.”

Habi organizes these competitions to encourage weavers to strive for excellence and to come out with new things. Lim shared that in the five years that Habi has held the piña weaving competition, they have seen the introduction of new techniques and the revival of old methods.

“[Weavers] stopped doing certain things because it was much more difficult and also because nobody was interested in them. But because it was for competition, they brought it back and in that way, the tradition wasn’t lost.”

She added, “And that’s the thing we have to guard against. These things can get lost, or people forget about it.”