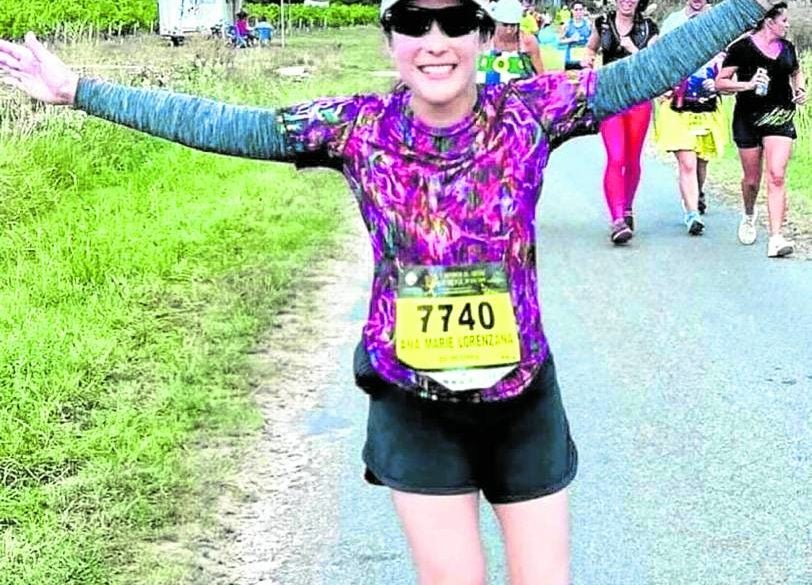 How this Filipina restaurateur ran ‘the world’s longest, booziest race’

It was Ana Lorenzana De Ocampo’s husband Jayjay, a triathlete, who inspired her to run marathons. She was a spectator when he ran at the 2008 New York marathon. “What got me was the high you get after the race—euphoria would be the best word to describe it. The crowd was amazing. They were so supportive and inspiring, which really gave me a reason to give the sport a go, and I did the following year,” the cofounder and chief executive officer of the Wildflour Group told Lifestyle.

She did the National Milo Marathon as a practice run, but “if anyone would do a marathon for the first time, I think it should be New York,” she said. “The race passes through five different boroughs of New York, it was definitely a unique way to see the city. The crowd cheering for you will keep you going, it was like New York was giving you a hug.”

The Paris Marathon, which she ran in 2010, was another memorable one. “It was my best marathon time and I just love the fact that I can go see the city of Paris on foot.”

De Ocampo loved running but eventually, she experienced burnout. “Running had become too serious and I felt like my world revolved around running already instead of my family.”

She talked about how she got lost one cold winter morning while training in Lake Tahoe. “It was very scary because I had no idea how to go back and I was not dressed for the weather. It dawned on me that not all my endeavors needed to be taken seriously and that there are things in life best enjoyed slow and easy. Since then, I decided to just pace myself and ease up during my daily runs.”

Her last race was 10 years ago and the restaurateur thought her marathon days were over but fate had other plans.

“Me and my EO (Entrepreneurs’ Organization) women forummates, along with our husbands, decided to go on an EmpowHER retreat to Bordeaux. All the arrangements were made by my friend and forummate, Feli Atienza.”

It was pure coincidence that the Marathon du Médoc was happening at the same time as their visit. “I knew this was the sign to take part in the race,” De Ocampo said.

Described by The Guardian as “the world’s longest, booziest race,” this French marathon takes costumed runners through vineyards and includes stops for wine tasting and eating local offerings like steak, foie gras, oysters and more. It sounds like the perfect experience for a marathon-running food connoisseur like De Ocampo.

Hard to get into

But getting into the marathon is not easy. “You have to understand that this is one of the hardest marathons to get into. They only allow 8,500 participants every year to preserve the tradition of the Médoc. It’s a very limited number if you compare it to the New York or the Paris marathons.”

Enter the Miailhes. “During our stay there, we were hosted by the wonderful Eduoard and Sevrine Miailhe who are the owners of Chateau Siran, a beautiful vineyard in the French countryside.” The Miailhes lived in the Philippines for many years, before moving back to France a few years ago.

“The Miailhes were very gracious hosts and were kind enough to make me part of the Chateau Siran Marathon Team,” De Ocampo said. “I am very thankful to Feli and Sevrine who were kind enough to arrange everything especially since it was a last-minute decision.”

She didn’t push herself too hard during the three months she prepared for the Marathon du Médoc. “Believe it or not, my training mostly revolved around the treadmill. I really didn’t train too hard or too seriously for this race, save for the few times I ran outdoors. I mostly kept the habit of pacing myself and getting into my running rhythm again.”

De Ocampo wasn’t even sure she’d manage to complete it. “At first I thought I was just going to run as far as I could given my last-minute decision to join, but thanks to my running buddy Perkin Chai, the husband of one of my forummates, I was able to finish the whole way. He ran alongside me, albeit young and faster than I was, and was very supportive which made the race more bearable and enjoyable. My finish time wasn’t great but what’s important was that I reached the finish line and I had fun.”

And fun she had. First, there were the costumes. “There were runners dressed like Marilyn Monroe, soldiers, dinosaurs and various Marvel characters. Even my forummates who went out to support us dressed up in costumes. My forummate, Bea Soriano-Dee, took care of our garb. We were dressed up as Bridgerton characters—suits, dresses, frills and everything, which made it all fun and exciting for all of us.”

De Ocampo enjoyed the unique experience. “Who gets to race while enjoying the sights of the French vineyards, listening to live music, and getting to taste wine at 20-plus stops all while in fancy costumes and dresses? They even served oysters, foie gras, fruits, and other local foods at every wine stop, so each station was a different experience.”

But still, it was a marathon—and one with a course that she, after running eight marathons, has described as her most difficult one yet.

“The race started 9:30 a.m. at the height of heat, but what made the course difficult was the track itself. You had to run the loop around the vineyards which had a lot of uphill climbs and rocky uneven soil stretching throughout the trails. Nonetheless, the race was very organized and laidback, it was a great balance of fun and competitive.”

Her favorite moments? “Definitely the excitement you feel at the starting line and the relief and overwhelming support you get at the finish line. It was also the small details during the race that made it worthwhile, like being able to pass through the vineyards on foot, seeing family and friends cheering for me as I ran the trail, and being able to enjoy the wine and food at the stops with other runners from all around the world. A wonderful bonus was when I saw my whole EO cheering squad at the end of the race.”

It was a triumph that needed celebrating. “We celebrated with a lunch at Arcachon which is famous for its clear blue beaches and delicious seafood. We feasted on the local oysters, which are a must-try when in Arcachon. We enjoyed sipping on wine fresh from the Bordeaux vineyards with the view of the seaside as our backdrop. It was the best way to celebrate a win for the Chateau Siran marathon team.”

The race was the cherry on top of an unforgettable trip to Bordeaux. “My Bordeaux experience is one for the books. Living with locals truly takes your trip to a whole new level. Eduoard and Sevrine made our stay very memorable. They took us around the estate and we had meals in every part—from the vineyard, gardens, and even the cellars.”

It was harvest season during their visit and they got the chance to visit St. Emilion’s Château Angélus and be shown around by the owner, Hubert de Boüard de la Forest. At Château La Tour, they learned more about different wine blends and saw the personal art collection of the Pinaults (of the Kering luxury conglomerate), which own the vineyard.

“To cap it off, we had a beautiful lunch in the vineyards with Shaun Bishop—an entrepreneur as well as one of the runners in the Medoc race,” said De Ocampo, who described the trip as fulfilling, educational and very special. De Ocampo, who usually runs around the village where she lives or the polo field near her house, says she has no plans yet for her next marathon. “Maybe I’ll run a marathon again sometime someday but not in the near future. I’m just happy and very fortunate that at my age, I am still fit enough to run a marathon, that’s a feat.”

For people who want to experience the Marathon du Médoc, she said, “For me, it wasn’t about getting a good finishing time but having a good time and enjoying the Medoc experience. What they say is true: if you finish too early, you didn’t do it right! Marathon du Médoc is the type of run that is meant to be enjoyed—you have to take everything in from the wine, the scenery, and the company. It’s a marathon like no other.”