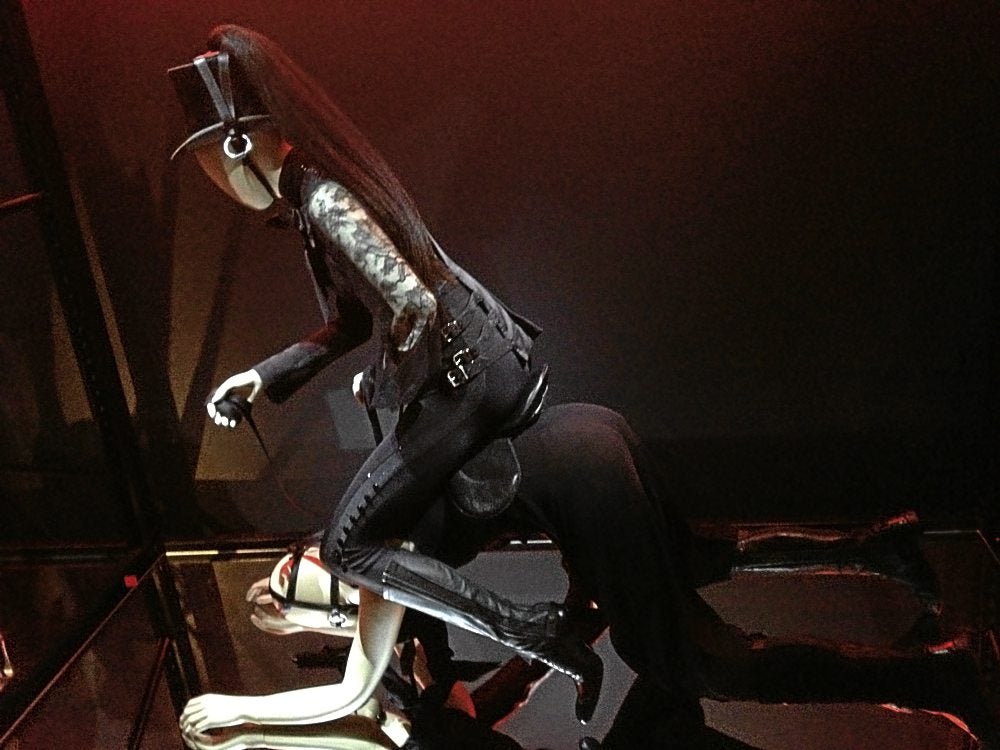 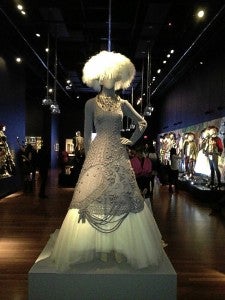 From a stint in the Philippines in 1974 with Pierre Cardin to taking over the house of Hermès in 1999, JPG has literally been all over the map.  The exhibition includes extensive sketches, archival documents, fashion photographs and video clips that spotlight Gaultier’s 35-year career, including collaborations with filmmakers, choreographers and musicians, most notably Madonna.

JPG agreed to do the exhibition, launched in Montreal Museum of Fine Arts, on the condition that it be unlike the usual stiff chronological archive style of exhibition, but a more provocative animated rendition that would show off his personal themes of equality, diversity and perversity.

“I wanted to create an exhibition on Jean Paul Gaultier more than any other couturier because of his great humanity,” explained Nathalie Bondil, director and chief curator of the Montreal Museum of Fine Arts. “Beyond the technical virtuosity, an unbridled imagination, and groundbreaking artistic collaborations, Gaultier offers an open-minded vision of society, a crazy, sensitive, and sassy world in which everyone can assert his or her own identity through a unique ‘fusion couture.’”

The openly gay JPG has received awards from CFDA and AMFAR for his outstanding craftsmanship and  ability to use his talent to tackle gender and transgender issues through androgynous and gender-bending styles. Asked his opinion on what he considers beauty, JPG stated: “I don’t accept that a woman has to be beautiful and just shut up—that is a stupid idea!”

That explains his choice of unconventional, even nonprofessional, models for his runway shows. He constantly pushes people’s buttons by delving into the darker areas of the sexual revolution, addressing issues of multiculturalism aside from bringing ethnic diversity to the Paris runway. Despite the gritty and controversial context of his collections, the clothes remain beautiful, superbly crafted with the finest dressmaking and detailing skills.

The multimedia installation is organized along six different thematic sections tracing the influences, from the streets of Paris to the world of science fiction, that have marked the couturier’s creative development:

“The Odyssey of Jean Paul Gaultier” begins the exhibition with an exploration of several signature Gaultier motifs—e.g., the blue-and-white-striped sailor shirt in all its themes and variations, spectacular mermaids and virgins. It welcomes the visitor with singing mannequins and a special cameo by the designer himself.

“The Boudoir” explores Gaultier’s fascination with lingerie and underpinnings, culminating in his signature collaboration with Madonna for her “Blonde Ambition” tour.

“Urban Jungle” is a multicultural clash of influences including Hussars, Mongolians, Hassidic Jews, Frida Kahlo and China. This gallery includes highlights of Gaultier’s haute couture detailing with unusual materials and techniques on view.

“Punk Cancan” features the dichotomy between the typical upscale French couture client and the street punks of London.

“Metropolis” concludes the exhibition with a presentation of Gaultier’s work for film, performance pieces and his relationships with pop icons such as Kylie Minogue and Tina Turner.

“I am no great artist. As a designer, I want to be connected, be sensitive to what society wants, desires and be clever enough to interpret into something beautiful,” said JPG.

He does see beauty everywhere—cat food tin, for instance, he redesigned into a bracelet; it also later inspired his perfume packaging. Despite his reputation as fashion “enfant terrible,” JPG comes off as a humble, self-deprecating and quite sweet. He recounted his childhood influences from “Nana,” his teddy bear which he dressed up since he had no access to a Barbie doll, to his fascination for his grandmother’s salmon pink satin corset.

The corset, an item he says “can rectify the body,” is his signature piece and one he is constantly reinventing. Perhaps the corset’s most memorable reincarnation is best seen on Madonna during her “Blonde Ambition” tour in 1990. Here, their famous collaboration resulted in the “pointedly erect cone-shaped bra” a vision embedded in most minds as the true state of Masculinity vs Femininity.

“The Fashion World of Jean Paul Gaultier: From the Sidewalk to the Catwalk,” runs March 24-Aug. 19 in Herbst Special Exhibition Galleries. Tickets can be purchased on the de Young’s website: www.deyoungmuseum.org.