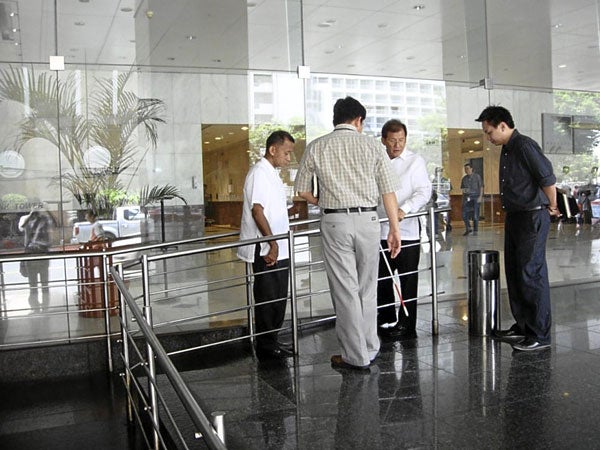 His blindness didn’t get in the way of his vision

By: Marian Regina M. Layug     Philippine Daily Inquirer / 09:20 AM June 25, 2011
Going completely blind at 31, just as his architectural career had taken off and was a thriving enterprise, was clearly not in the plan. But neither was caving in and surrendering to the darkness.

Despite 18 eye surgeries in eight years, Jaime Gomba Silva lost his sight to congenital glaucoma in 1982. At the time, there seemed no way to continue on his career path given his condition. But technological developments over the past decades and Silva’s determination not to let blindness get in the way of his vision, got him back on track. They also earned him the distinction of being the first blind person to be honored as this year’s Outstanding Professional Architect – one of 46 honored in their respective fields by the Professional Regulations Commission (PRC).

Early on, when he thought he would have to turn his back on architecture, Silva tried his hand at farming and business. “I wasn’t thinking of how to be rich anymore, I just wanted to be of value to others,” he recalls.

Eventually though, a comprehensive computer training program and a computer system designed for the blind allowed Silva to return to architecture with the support of his wife, friends and family. The newfound skills enabled him to take on the responsibilities of manager for several infrastructure projects.

Silva became Administrative and Leasing Manager of Cyan Management Corporation. Although he no longer drafts architectural designs or oversees blueprints, he does practice construction and property management, which are allied fields of architecture. In construction management, he makes sure that construction supplies and equipment follow design specifications conforming to the national building code.

In 1996, Silva lent his voice to the advocacy for Persons with Disability (PWDs), joining the National Council on Disability Affairs and working for the implementation of the Accessibility Law or BP 344. He has inspected more than 300 establishments. A tireless talker, Silva has spoken in numerous fora on the law, particularly to building officials and those from big conglomerates such as SM Malls, Ayala Land and Robinson Land.

With support from the Japan International Cooperation Agency, Silva helped create barrier-free environments for PWDs in Opol, Misamis Oriental and New Lucena, Iloilo. He campaigned for the organization of PWDs in every barangay in his home city of Makati. In 2002, Silva was awarded the Apolinario Mabini Presidential award.

Today, as chairman of the committee for the Apolinario Mabini awards, Silva audits buildings nominated as disabled-friendly structures. Accompanied by an assistant, he walks through the buildings’ interior and exterior facilities, checking all the measurements against a checklist dictated by the Accessibility Law. His measuring tape is marked with holes punched at significant points, which he palpates to take accurate measures.

“I know the dimensions, and these are also marked in my cane. I can measure with my dangkal [distance between the tips of the thumb and middle finger of an outstretched palm],” he explains. “I can just hold the handrail and I can measure that handrail,” he says, to illustrate how his blindness isn’t a liability to his profession. He also records the measurements with a tape recorder. The recording is then transcribed and which he reports in a narrative. To ensure that measurements are accurate, a technician or another architect usually joins him on inspection tours to verify the figures. Although he has not designed any buildings for PWDs, he has been consulted by the World Bank to make recommendations on building designs.

Silva’s two computers can read scanned documents aloud to him on voice outputs, allowing him to write and answer his own correspondence. He “reads” the news online every morning and watches movies with voice-overs. A voracious reader, he regularly downloads management books. He travels alone even abroad and has learned to be organized in his habits and surroundings to remain independent and self-reliant.

Silva speaks out against the segregation of the disabled that he thinks hampers independence, and instead advocates inclusion. He explains: “Inclusion is when society moves to adjust to the PWDs.” Currently, he is working on amendments to the accessibility law to add provisions for those with sensory disabilities, like the blind and the hearing-impaired.

This PWD spokesperson’s parting message is always the right of the disabled. “Every person has the right to live the Filipino dream, to become independent and productive, to be included, to be accommodated and to be part of the built environment. This is our civil right,” he asserts.