Childhood beatings get a beating in this short film | Inquirer Lifestyle ❮ ❯ 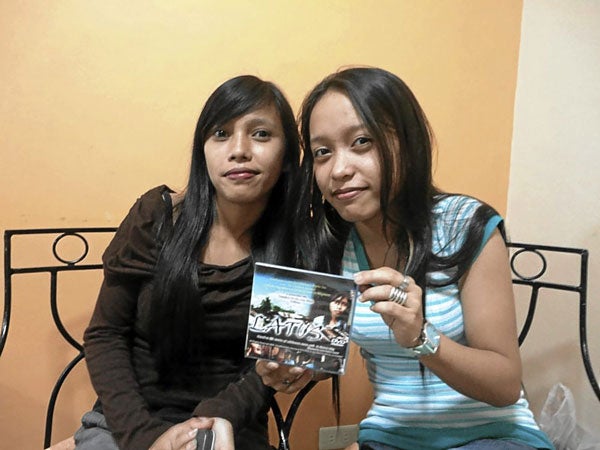 Childhood beatings get a beating in this short film

Philippine Daily Inquirer / 09:23 AM June 25, 2011
Never in their lives did Annie Lucion and Elsie Abella ever imagine themselves onstage in Cannes, France, receiving an award.

Beaten up by their parents during their childhood, the two girls fell in with gangs and lived on the streets. They got into riots, sniffed solvents and indulged in teenage sex. They seemed resigned to living fast and dying young, until they learned about children’s rights, did a short film on the topic and got recognition for it.

Lucion, 20, and Abella were in Cannes, France on May 15 to receive the Best International Short Film award for their film “Latus,” a Visayan term meaning “beatings.” The film competed against 57 other works from 23 countries in the New York International Independent Film and Video Festival. The two represented their Davao-based group NAKAMATA, which was organized by the Tambayan Center for Children’s Rights in southern Philippines. The 15-minute film depicted the corporal punishment which Lucion and Abella experienced in their childhood.

“More than the award, we are happy to bring out the voices of street girls,” says Lucion, who plays the lead character Vicknelyn in the short film. “On road shows and every chance we get, we do our best to push our dream – to stop corporal punishment and get a start on positive discipline.”

She adds: “It took me almost 10 years to complete my high school education because I rebelled. I couldn’t understand why people who are supposed to love me would beat me and hurt my feelings. Since I was a child, my father had high expectations of me. But it’s only when I do wrong that I get attention.”

Abella notes that corporal punishment is deeply embedded in Filipino tradition. “When I was in Grade 6, our teacher wanted us to write our report on a big sheet of paper for posting on the blackboard. When we were not able to do it, we were punished. Our teacher made us squat then she hit our hands like she was playing the drums,” she recalls.

“Corporal punishment is a global issue,” says Edith Casiple, executive director of Tambayan, which produced the film. “The abused children themselves are calling for a stop to it in the film. The kids may be new to acting but they are so natural. They speak from the bottom of their hearts. It amazed the film festival organizers.”

“Some say they are shaven bald so they would just stay in the house. Some are chained, like dogs. Even my sister’s feet were whipped when she came home very late one day,” recalls Abella.

Violence can become a sort of family tradition, she adds. She realized that her parents went through this abuse as well, says Abella. “We’re both victims. My father also underwent rigid discipline from my grandmother.”

Fortunately, Abella and Lucion note, more cases of corporal punishment are now being reported because of increasing awareness.

“Our parents would say we are only ‘children’ [and don’t know any better so they beat us],” says Lucion. “But we want them to tell us what is right and wrong. We want to become responsible for our decisions.”

Affirmation is just as important, she adds. “Some parents won’t say ‘I love you’ to their children. They are not used to it, but this is important.”

Casiple says the short film has generated heart-moving reactions and life changing resolutions from the audience. “One father realized how much he had hurt his child with his whippings. He cried so much he had a stroke. But in the hospital, it was still his child who gave him the strength to recover. Now he’s making up for his mistakes.”

Wilma Banaga, adviser for Child Protection and Child Rights Governance at Save the Children, which help financed the film, says that she and her colleagues have filed a bill in Congress to put an end to corporal punishment for children.They started their advocacy in 2005, but the campaign was officially launched in 2006.

“In 2007, we filed the bill in Congress. It has passed the committee level at the Lower House,” says Banaga. After several public hearings, it is now with the Committee on Appropriations.

Banaga says they want positive discipline as an alternative.

“Positive discipline starts with setting goals for your children. Like a teacher, you should have a plan: what kind of person do you want your children to become –confident, peace-loving, self-sufficient individuals. Next step – ensure you’re providing warmth through hugging, telling them you love them and talking to them, and structure where you balance love with clear guidelines, expectations, telling them what’s right and wrong, setting the limits. Have an understanding of what children need at particular phases of their life.”

The bill her group filed could change things a lot, says Banaga.

“The first country that passed such a law is Sweden. Its present generation of parents has been raised under that law. Now it is unthinkable for them to learn that there are still countries practicing corporal punishment on children. I refuse to believe that the Asian culture is a violent culture. We are a peace-loving people.” Women’s Feature Services