With ‘Titanic’ exhibit as come-on, Singapore is for lovers, too | Inquirer Lifestyle ❮ ❯ 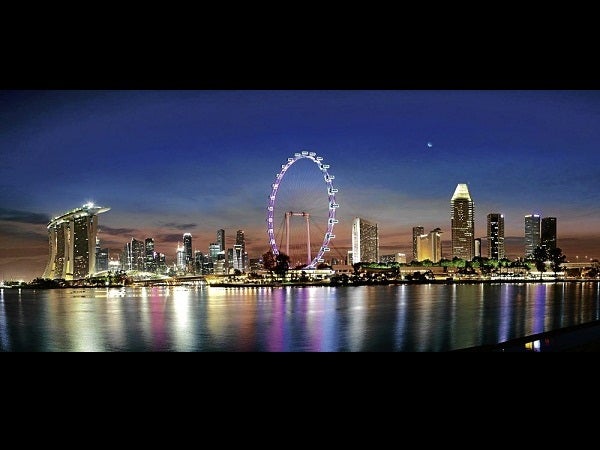 With ‘Titanic’ exhibit as come-on, Singapore is for lovers, too

A visit to the museum may sound as romantic as a trip to the supermarket’s hardware section, but not when it’s featuring actual artifacts such as plates, glasses, cutlery, trunks and articles of clothing salvaged more than 70 years later from the ill-fated Titanic (ongoing at the ArtScience Museum until April 29), which sank in frigid waters of the North Atlantic exactly a century ago.

This is easily a great come-on to the Marina Bay Sands in Singapore.

Known more for its efficiency, juicy bargains and lush tropical environment, Singapore is probably one of the last places lovers would consider a romantic destination.

Not anymore. Come-ons such as the Titanic exhibit should be turning Singapore into a romantic destination for couples.

Singapore Tourism Board invited Inquirer Lifestyle to experience the range of possibilities for Filipino couples (see sidebars). Two of its most popular destinations these days are the Marina Bay Sands (www.marinabaysands.com), including the Sands Sky Park and ArtScience Museum, and the Singapore Flyer (www.singaporeflyer.com).

Looming hundreds of feet in the horizon, both attractions have become iconic additions to Singapore’s constantly evolving skyline. These, with the city’s other more earth-bound attractions such as the Singapore Zoo, Jewel Experience, Sentosa Island, ResortsWorld Singapore, and even the idyllic and accessible Singapore River Cruise, offer possibilities for lovers of all ages and persuasions.

One of Marina Bay Sands’ attractions, of course, is its Las Vegas-style casino, which came after the first-ever casino complex, ResortsWorld, in straitlaced Singapore. For nongamblers, the hotel and convention center gives options.

They don’t even have to be guests in the hotel to gain access to the Sky Park. On the hotel’s 57th or topmost floor, the Sky Park has a cantilevered viewing deck that gives sweeping vistas of Singapore and the straits beyond. For a minimal entrance fee, the couple can pledge their undying love before choosing ideal gifts for each other at the Shoppes at Marina Bay Sands on the ground level.

Designer brands include Gucci, Hermès, Prada, Cartier, Patek Philippe and Louis Vuitton, whose iconic glass-panel store, said to be the brand’s biggest outside Paris, juts out into the bay.

The guy can pop the question in a romantic dinner in any of Marina Bay Sands’ celebrity-chef restaurants led by the likes of Mario Batali, Wolfgang Puck, Guy Savoy, and Singapore’s very own Justin Quek.

After watching James Cameron’s “Titanic,” lovers of all ages are bound to find points of interest in the Titanic exhibit. Then as now, such negative human traits as hubris, class distinction and a desire to play God are on full display in the form of insightful pictures, quotes, dramatic lighting and clever juxtaposition of real items, including parts of the supposedly “unsinkable” ship.

More than the presentation of artifacts, one of the show’s strengths is its ability to give the collection of salvaged items a human face by identifying who owned which. Almost every vignette tells a story that’s bound to make you stop and think and tear up at the memory of those 1,523 souls who didn’t make it.

None of them are nameless, as the show took pains to list the names of those who lived (705 people, mostly in first class) and those who didn’t. Don’t waste your time looking for the names of Jack and Rose. You’re better off trooping to the nearest multiplex to catch “Titanic” in 3D.

An hour in the museum is never enough. There was simply no time for us to walk through a simultaneous exhibit of Andy Warhol’s artworks and musings (ongoing until   Aug. 12) in an adjacent hall.

Marina Bay Sands also has two state-of-the-art theaters, one of which is the current venue of an Australian production of the Broadway hit musical “Wicked.”

Another gravity-defying vantage point for lovers is the Singapore Flyer, Singapore’s bigger, newer and arguably more modern answer to the London Eye.

Said to be the biggest observation wheel of its kind in the world, the Singapore Flyer (150 m in diameter; 165 m in height) has 28 glass-and-steel capsules. Each capsule can accommodate as many as 28 people, who, from various elevations, get a bird’s-eye view of the entire city, including nearby Marina Bay Sands and Singapore Central Business District. Unless you’re deathly afraid of heights, you need not worry as you hardly feel the slow ascent and descent.

For more intimate occasions, lovers can book an entire capsule to themselves and enjoy butler and dinner services. There are even wine pairings for the main course consisting of either fish, chicken or meat.

It takes the Singapore Flyer 30 minutes to make one full revolution. During this brief stop the crew brings in dessert and coffee as they unload used dishes. Then the capsule again begins to ascend, then descend for another 30 minutes.

Not a few men have taken such opportunities to pop the question, said Fulvia Wong, Singapore Flyer’s publicist. (Each capsule has CCTV camera, for security purposes.)

“There was even a time the butler served dinner with the engagement ring hidden somewhere in the main course,” said Wong. “All of it, of course, was planned by the woman’s boyfriend. You could just see how happy she was.”

There have also been rare times when some couples got a bit carried away. As long as the pair doesn’t make a public scandal and are unmindful of being videotaped, they’re generally left alone. (Don’t get any ideas, though, since such intimate acts aren’t encouraged.)

Other sky-bound options are offered by the Jewel Box, Singapore’s iconic hilltop destination offering couples several dining options. It’s also a more romantic and scenic way to go places. They could skip the newly built bridge connecting the main island to Sentosa, and instead hop on an enclosed cable car at the Jewel Box to get to Universal Studios and ResortsWorld.

The opening of these two attractions assures repeat guests of having something new to do at Sentosa, one of Singapore’s oldest and most famous attractions. Couples, for instance, could let gravity (again!) do the driving as they race against each other on soapbox-type cars at the Luge racetrack.

Or they could spend the dying hours of the day getting a massage at Spa Botanica. (Customers can even request for Filipino therapists.)

As night falls, they could troop to ResortsWorld for luxury shopping before dinner in any of the casual and fine-dining restaurants like Chinois, a modern fine-dining place serving Chinese food. Just like theme parks in the US, Sentosa now has five-star hotels where guests can stay on the island longer.

To cap a long day of sightseeing, couples could either try their luck in the casinos or catch “Voyage de La Vie,” a song-and-dance show with Cirque du Soleil-caliber contortionists and acrobats at the Festive Grand Theatre. Indeed, what a voyage it has been so far, but the fun has just begun in Singapore.