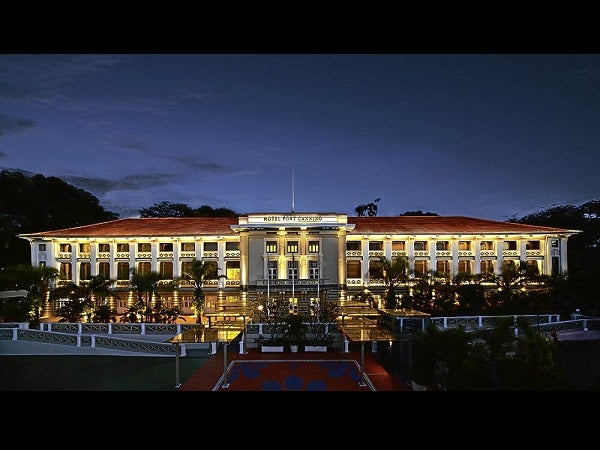 Singapore has again led the way in conservation by turning an abandoned British colonial-era administration building into Hotel Fort Canning, a three-story, 86-room (two  of which are luxury suites) heritage boutique hotel nestled between Orchard Road, Clark Quay, and the city’s CBD.

Designed for business travelers and couples, the hotel opened in November 2010 after a two-year renovation. It boasts food and beverage outlets, including an Italian restaurant, ballroom, function rooms, state-of-the-art gym, and two swimming pools. Rates start from S$350/night for a deluxe room inclusive of breakfast, Wi-Fi, and daily evening drinks at the private lounge (www.hfcsingapore.com).

The hotel stands out among the city’s bigger and more famous players. The property has manicured gardens and a lush tropical park beyond, and even an outdoor shaded jogging trail that allows health buffs to savor the pristine air.

Since it’s a fairly small property, its friendly staff, including some Filipinos, makes sure you get personalized service. Apart from providing the usual creature comforts, including the novelty of staying in rooms with exposed bathtubs or indoor balconies with glass walls, Hotel Fort Canning is a date with history few other hotels in Singapore can provide.

Built in 1926, the iconic structure located on what was then Government Hill was the administration building of the British Far East Command. Adjacent to it was the governor’s residence, where British governors, beginning with Sir Stamford Raffles, once lived.

In front of the hotel is the Bottle Box, a fortified bunker where British wartime commander of the Malayan forces, Lt. Gen. Arthur Percival, set up his command. Also in this building gallant British troops, under Percival, handed over the reigns of power to victorious Japanese invaders in 1942.

The building’s site has an older history that dates back to the Majapahit kings of the 14th century. Portions of a palace’s walls and foundations from pre-colonial Southeast Asia stand in certain sections of Hotel Fort Canning’s sprawling gardens.

To pay homage to the area’s history, the hotel, with archeologist John Miksic, built an Archeological Pit on the lobby floor. Spanning four huge tiles, the glass-top display shows local artifacts unearthed from the hotel’s grounds. To give the display a feel of authenticity, the objects are set in partially dug red earth.

“There’s probably no other hotel in town that’s situated within a National Heritage Park with a history that dates back to the very beginning of Singapore,” said Jeremy Tan, senior associate director of DP Architects, the firm responsible for the building’s renovation, in a press release. “Our approach was to celebrate the history of the Hill by enhancing the richness of its heritage.”